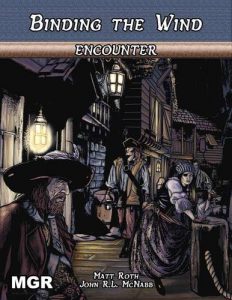 Piracy is an omnipresent threat while sailing the open seas, and none are more formidable than the treacherous slavers that seek more than simple cargo. Often putting their newly captured stock to use in the rowing banks of galleys, these predators prowl the trade lanes and get rich off the suffering of others. Among the flesh-traders, the Iron Windrunner is a ship of no small renown. It owes its fame to its namesake, an air elemental restrained in enchanted iron bondage. Thanks to a complex system of gauged pipes, this living wind engine propels the galley to nearly unparalleled speed on open sea while keeping the traditional oars for finer maneuvering.

Eight Pages! Either this is a tightly written masterpiece or I’ve been ripped off. What are the odds?

It’s a pirate ship with a captured air elemental. Ever get the feeling you’ve been cheated? My life is a living fucking hell.

You get: a detailed explanation of the ship. A paragraph on each of the half-dozen notable NPC’s. There’s nothing else here but reams of “hot notes” describing tactics and behaviors. There’s NOTHING in this. Nothing is particularly evocative. There’s nothing special about the fucking ship except it has got an air elemental. It takes eight pages to do what one paragraph could do.

So, there’s your two problems: it’s not a fucking adventure and it’s boring as fuck. It is, at best, an encounter.

In retrospect the cover says “ENCOUNTER” on it. The publisher’s text doesn’t say shit about that though. I fucking HATE IT when people don’t disclose what the fuck they are selling. That fucking joke Castle Greyhawk adventure wounded me deep.

And it’s boring. It’s just pirates. They swing up alongside, fire ballista, board the ship … we, as consumers, are paying for imagination. For inspiration. Far too often we get shit. I feel like this thing is the equivalent of paying for an orc guardroom.

“1. Guardroom. Four orcs at a table shooting dice.” I’ll expand it to eight pages later. You all owe me $1 now. Pay up.

It’s $1 on DriveThru. The preview is two pages long, showing the cover and title page. Note that the cover has FUCK ALL to do with the adventure, except, you know, pirates.https://www.drivethrurpg.com/product/213667/Binding-the-Wind?affiliate_id=1892600

4 Responses to Binding the Wind