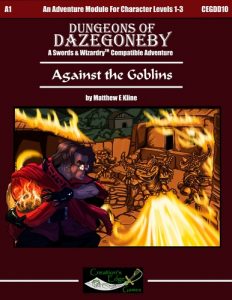 A foreboding dream of impossible foes; goblins with control over fire, disease, and death, leads to a tiny village on the edge of the wilderness threatened by three goblin tribes united by chaos and a legacy of hate.

This 65 page adventure has three goblin lairs near a village. There’s a terrible hook/pretext, and the writing is long and drawn out for what are, essentially, three standard goblin lairs. It rises slightly above generic by including a few extra features in a few rooms. Three lairs, two with 25+ rooms, stuffed full of goblins, means rough going for 1st levels and extended periods in the supplied village. The longer time in the village is refreshing, even if the three goblin lairs are a bit samey … just because it’s always goblins. As “generic first level goblin” adventures go it would be an uninspiring thing to fall back on … but I can’t get over the expansive writing that drags me down mentally as I try to imagine finding things while running the adventure. There are better choices.

The worst part of this thing is at the beginning and is something that can be safely ignored: the hook. You have a dream about fire and goblins and a certain village. You have it every night. If you ignore it you take damage … and eventually die from it. Look, I know there’s some give and take in hooks. We all pretend and compromise and find some pretext to want to take the DM’s shitty hook. But this kind of TERRIBLE advice on how to deal with people not biting is bad for adventure writing. Somewhere, someone is going to read this and think it’s an acceptable way to run a hook. Why the fuck this would be proffered as a solution is beyond me. “So, you don’t want to play D&D then?” would be better advice, as would pulling out a boardgame to play. I fucking hate this kind of shit. It’s not helpful for a new DM solving problems at the table and in facts hurts them. There’s no excuse for it. But, it’s easily ignored by most.

The intro and village take up the first seventeen pages, with most businesses getting a column or so of text. Given the amount of time the party will be healing, that’s not entirely inappropriate for a homebase, but I think it’s done all wrong. It focuses much more on trivia then on memorable bits. For example, some long-ish historical anecdote on how NPC Bob got his name/nickname. Long boring trivia, including most physical descriptions, don’t make folks memorable. The NPC’s need something to hang their personalities/peculiarities on. There’s a few side quests in the village, from killing rats (ug!) to wolves (ug!) to finding missing creates (ug!) Side quests are great, but something NOT hackneyed like rats in the basement. Further, the village has between one and THREE monster attacks night, from rats to wolves to zombies to bears and so on. More than a little excessive and would result in the town in a state of panic at that frequency. I think. Then entire village just comes off as generic, with the text expanded with boring trivia. There ARE a couple of investigatory bits, which can provide some assistance down the road. IF you find the goblins body then this other thing changes. Or IF you talk to the druid then she talk to the woodland creatures and you get a heads up on the goblin attack, and so on. It’s ALWAYS a good thing when the parties actions have consequences, especially when they see positive results.

The lairs are a small tower, some rate tunnels and a necromancer’s cave system, with the later two have 25-ish+ rooms in them. It’s mostly the usual stuff with guard rooms and so forth, with the text expanded upon with boring mundane details and and what the goblins usually do but not right now embedded history that is USELESS during a game. There are exceptions. A room with a dretch in a summoning circle, or a room with a pit in the middle. The latter, in particular is a good example of mixing up the terrain to make combat a bit more interesting. Chucking a goblin in a pit, or avoiding that fate, is great fun. A room described as having a table and chairs is boring mundane description if the room has nothing else in it. A room with tethering bookshelves described is potentially interesting combat terrain if combat happens there. The lairs are their best the bridges, ledges, pits, and summoning circles are in the rooms … things to make them more than just a room with five goblins … that takes a column of text to describe.

The random mundane treasure tables, and the few new magic items, are a delight and I would have liked to see those sorts of elements used more rather than the emphasis on the mundanity of the dungeon description and de rigueur text.

It’s $6 on DriveThru. The four page preview tells you almost nothing about the style of adventure you are buying, unfortunately. The last sentence of the last page, three, is fairly typical of the writing style throughout, with lots of detail about things probably don’t matter.
https://www.drivethrurpg.com/product/150651/Against-the-Goblins-A-Swords–Wizardry-Adventure?affiliate_id=1892600

2 Responses to Against the Goblins