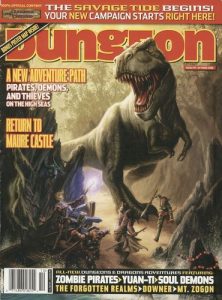 There is No Honor
By James Jacobs
Level 1

The first part of the Savage Tide adventure path. I look forward to the tedious underwater rules and the magic item gifting to send the party Under The Sea. Hey! Surprise! But not in this adventure! This one is just a bunch of little railroad vignettes until a final “dungeon” in some thief guild tunnels. First you have to go fight some dock workers to get a ring. Then you have to use go to vault to use the ring to get in. They track down a chicks brother. Then fight off undead in some abandoned tunnels. Then track him down again, get ambushed by thieves guild, and then attack the thieves guild. It reminds me of those “How to write an adventure” articles. Start things off with a fight, include some roleplaying vignettes, etc … but all in the context of a linear story. The room descriptions are, of course, mixed up with history and irrelevant backstory, clogging them up. Want a linear adventure? Here’s one. It’s not too odious, if you’re in to that stuff.It’s also not particularly good. Perhaps the best part is when the party is trapped in some tunnels, surrounded by undead, and have to explore/escape while being sometimes attacked. It’s a nice claustrophobic feel … that’s still too long. The roleplay segments are not supported well, the set pieces are not supported well, blech.

Requiem of the Shadow Serpent
By Anson Caralya
Level 9

A fifteen room COMPLETELY linear cave under the pretext of being a troll lair but have yuan-ti at the rear. The first few rooms are a “test” to “try the mettle of intruders.” Ug. A lame pretext by the designer to just throw shit in and solve some imaginary continuity problems, you mean? It falls in to the trap of needing to explain everything. A nice little painting, with snaked designs showing patterns in patterns, has to explained as a they enjoy painting it as pastime and tormenting the trolls with the design patterns.” NO ONE CARES. The trolls are dead. It’s linear. The yuan-ti are dead. What the fuck is the point? Nice treasure, but this MANIA of explaining is a disease.

Maure Castle bitches! I LUV WG5. Hmmm, I need to go back and look at it again after seeing this entry in to the castle. The map is one of classic old school complexity, the kind truly made for exploration. The dungeon level has things to learn and puzzle out, especially with the help of Augury, etc to fill in the gaps. It’s full of weird paintings, statues, cryptic messages and the like, all positive. It’s also FULL of monsters being released from stasis, the ethereal plane, etc, which is a schlocky way to handle creatures and I don’t recall WG5 resorting to that, at least not to the extent that it’s done in this one. It feels like almost every room has “a guardian placed here by Wizard Bob.” There is a trap or two that could be straight out grimtooth, anti-grav, through an illusion ceiling, to a ceiling of spikes, that make you bleed to death, while putting you to sleep. A little of that goes a long way and Rob doesn’t really cross the line, except with the stasis monsters/guardians. The writing feels wrong, and needs to be tightened up. This isn’t really something to seek out, unless you’re a Maure Castle fanatic, and even then, its one of the weaker levels.