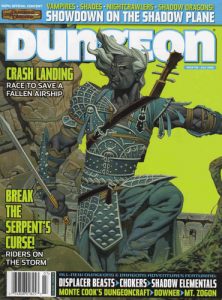 Hey, I’m on vacation in California! I finally get to go to Death Valley!

An airship has crashed in a hollow mesa and you’re sent to get some papers from it. The mesa entrance splits and goes three directions. There are two factions, and some random monsters, in the mesa caves with goals ranging from “kill the other guys” to “fuck up that airship.” The airship captain lives and refuses to leave, repairing his shit, you all take off and have one last encounter as the two factions launch an attack as the ship takes off. The map is kind of “trident linear” and does a good job privind a path/ways to engage with the three factions. One factions betrays the party while the other … doesn’t? It’s unclear, based on the finale encounter. There’s nineteen rooms and the adventure sometimes manages to put four on a single page, a singular accomplishment for Dungeon Magazine! A shit ton of text is taken up with prescribed tactics with some “Mr Bob had intended to use this room for X but instead Y and Z” nonsense. The basic setup with wounded factions trying to off each other is a nice one. You could probably have a nice adventure on one page, or one sheet.

And Madness Followed
By Greg A. Vaughan
Level 10

Iconic setup. Iconic location. Iconic situation. Shitty padded text making it all hard to run. I REALLY want to like this one. Raiders appear when big storms arise, according to the shitty hooks provided/dying man in the caravan. Tracking them back (100 miles … uh … that’s a bit long ..) has a massive temple appearing out of thin air at the end of a valley during a storm. That’s suitably classic! Inside are some monsters, intelligent foes, and the raiders. IE: MAYBE some factions. At some point while exploring the temple the storm ends, the raiders come back, and the place disappears from the material plane. Killing the raider leader breaks the curse/solves all problems. The map is excellent and reminds me a bit of the garden level of barrier peaks, with its mixed indoor/outdoor space, balconies, and so on, along with a shit ton of roof entrances to the temple. The switch from “exploring the temple” to “being hunted inside by the raiders” is a nice switcheroo also, changing the tone. It also includes an explicit section about who will talk to you … although starting everyone as hostile and those creatures being displacer beasts and chokers (when the fuck did D Beasts become intelligent? Talking chokers were some underdark nonsense, I think?) will both make things a little harder. Paragraph read alouds and long unfocused DM text sections detract from getting use out of it. “The other six hold only the barest bits of bone and shreds of cloth. This displacer beasts that occupy this room licked the lacquer from the corpses like giant candies before consuming the bodies.” Great. Does the adventure take place while they are doing this? No? And they’ve completely consumed the bodies? So everything in the LONG background paragraph is irrelevant to the adventure, as well as those sentences? Perfect. Glad you were able to pad out your Pay Per Word score. This needs a complete edit with a magic DELETE key, then you’d have a decent adventure.

There’s nothing to this. Go to a shadow plane, visit three clearings and have a fight at each. Then you go inside a monolith and have a bunch more fights. Then you have a boss fight so you can save the world from darkness. It looks like it’s just an excuse to have a bunch of nightshades/nightwalkers in an adventure. It’s just mini’s combat.