RD1 – Tale of the Ruby Dragon 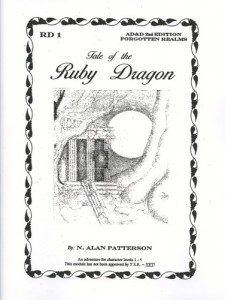 This is a journey through a swamp to a wizards home, and then an adventure inside of it. It is the craziest product I have ever ever seen. Wait! Wait! Go read my review of DF26: The Forgotten City of Al-Arin, or go grab the adventure, it’s free on Dragonsfoot. That may have been the most silly module I’ve ever reviewed. Or maybe Palace of the Vampire Queen was. They are silly in different ways. This MASTERPIECE combines the two in to some new MAGNIFICENT form of performance art! As far as I can tell, it is completely serious. I can’t tell. I’m not familiar with the Forgotten Realms. I have no idea is the silliness is from the Forgotten Realms setting or unique to this adventure. Doesn’t matter. THIS IS AWESOME! I have a copy of Designers and Dragons on my sunroom table. I’m going to replace it with this. In spite of what it is, a mostly juvenile attempt at an adventure, it also has some crazy kind of imagination behind it that A LOT of product is missing. Dear god, go buy it. But not at $35; find it cheaper. Then buy it. And read it. You can’t use it but it will stand proudly on my shelves right next to the joke/serious copy of Die Macher (Hey kids! Who wants to play a 6-hour game about west german political elections!) and my reprinted Palace of the Vampire Queen. Get inspired!

This thing is CrAzY! I have no idea where I got; given the Pacesetter back cover I suspect I picked it up at their booth at GenCon. Looks like it ran me $35 for numbered copy 80 out of 95. There’s a little bit of history on it over at the Acaeum. Near as I can tell. It’s some kind of self-published amateur adventure that Pacesetter picked up to do a republish of, that looks more like a mimeograph than anything else. It belongs to the same genre as Palace of the Vampire Queen, but dials that style up to 11. Let me quote:

“… Sloath (mature Bronze dragon from 7,000 years ago) was hunted by a league of Silver dragons from the Talons of Justice. They caught Sloath outside of his lair and captured him. He was brought to trial and found guilty of his crimes by Sardior the ruby dragon., judge of all dragons.” …” About 3,000 years ago a young red arrived at the council of the Talons, and declared he had killed Sloath and demanded that the curse be lifted so he could claim the hoard of Sloath. The hoard had been kept under protective custody by the council since the trial, at least what was left of it after paying restitution to the cities and towns Sloath had destroyed.” … “a squadron of silvers flew to the spot in the which the young red had said he killed Sloath.” and it goes on and on! It’s like the most bad ass junior high dragon boner fantasy of all time! The ruby dragon comes from the astral plane with his honor guard or emeralds and jades! Evil dragon sour out of pocket dimensions to kill him! On and on it goes!

This may be the most brutal adventure I’ve ever seen in my life. I LOVE IT! On the way through the swamps there’s some killer wilderness encounter tables. On the Tun plains you can meet B. Anna, the level 12 druid, female elf, traveling in Baba Yaga’s Hut! In the swamp you can meet hydras, trolls, ghasts, ghouls, a catoblepas, and ALL sorts of other interesting people. It’s just a d20 table with a single entry next to each line. 19. Hydra. 8. Catoblepass. It’s wonderful! The set encounters are ever better though! Encounter one is a WIll O’ Wisp that leads you some mound sin the swamp … that house THREE SHAMBLING MOUNDS! And if the mounds are taking too much damage then the Wisp strikes the mound with its electrical attack to heal it 2d8! AND THIS IS A FIRST LEVEL ADVENTURE! I’m TOTALLY serious. It was written for a con and there are 8 1st level pre-gens included! Encounter two is a Sea Hag! And it goes on and on! You could play this fucking thing like Paranoia and give everyone six lives and it would STILL be a bloodbath disaster! But … ready for this? it’s still better than many other adventures! There are at least two encounters in which the party can make friends, with bullywugs and with ogres! There’s some foreshadowing as well, with ravens picking at a dead ogre body. The deadly stuff goes on and on and on! Even Jim Ward would have trouble with the number of deaths this things offers!

The wizards house/temple is ever BETTER! Almost every other room is a dead end with a secret door leading to it AND NO DESCRIPTION. Now look, I don’t need a description for every room. As the author indicates in the text, a lot of room s are empty, just make up a description. But a SECRET room? On a long hallway with LOTS of other rooms? With AT LEAST half of them being secret rooms? Can I at least have a room title? No? FUCKING GENIUS! I don’t know where to go from there. The room with two giant badgers in it, and a cat litter area? Oh! Oh! No! The first room! The walls are hung with banners, even though its just a small 10×10 room. Behind one of them is a hole with a water moccasin in it. Who is this guy? He may be the most imaginative person of all time! And behind another is a fine silver shield with the symbol of an oak tree on it, +1, that druids can use without penalty. Oh be still my heart! He gave the shield a description AND made it non-standard! This adventure tears me to PIECES. One the one hand it is a complete piece of junior high dreck. On the other hand it shows just how much imagination there can be, and is, behind such things before life (or, a degree in Set Theory, in my case) beats it out of you.

The whole adventure is like this. This kind of crazy mish-mash of ideas just thrown together, almost at random, with just enough bizarre behind them to make them work in some kind of insane logic. Don’t get me wrong; there is no way on gods green earth or his gamma irradiated red one that I could EVER run this. It’s just … wow … but as an example of the kind of free-flowing imagination of a pre-teen? It is a pretty damn fine example of that.

I’m gonna frame this thing as an object of art and put it in the entryway of my home. I’m totally serious. I know it sounds like I just insulted the adventure and its designer ten ways to Sunday but god damn I love the charm of these older/amateurish products. It’s like buying a house designed by the guy who designed the cities sewers in 1876: it has style and charm that is unique unto itself.

3 Responses to RD1 – Tale of the Ruby Dragon