The Fall of Whitecliff 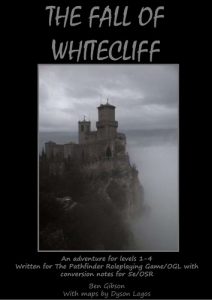 Awakening in the dark with splitting headache, you hear the curses of other tight-packed prisoners. No screaming. Must not be in the deep dungeons, not yet. Damned castellan-he’s as paranoid as he is venial. Apparently his keep is hard to crack even when he’s gone. But you’re inside now. He’ll regret this, if you can slip out of this cage…

Heads Up: This adventure went through my Critique Partner service. I ended up with five pages of notes and 20-ish messages back and forth.

This is a 22 page series of linked one-page adventure, about nine in all. It describes a “starting play” campaign arc, taking the players from level one to four, by presenting the adventure as a regional area/sandbox area along with how the areas relate to the inciting event and the goals of the villain. Otherwise the party is driving the action. It’s written for Pathfinder and does a good job managing the more … bloated aspects of that system. Colorful, terse, dense .. this adventure shows how a series of one-pagers can be linked together in a regional area, much in the way Stonehell did for dungeon play. It’s good.

Stonehell took the one page dungeon and showed that how, by linking them together and supplementing it with a few pages of text, you could create an interesting megadungeon experience with a DM reference, the one-page dungeon proper, that was actually useful at the table. This adventure is doing something similar, but for a regional/sandbox sort of campaign arc. What if you sketched out a small region on a single notebook page. It’s got this cruel baron, a couple of nearby towns, a thing the evil baron wants in some caves, someone that hates the baron, and so on. Now, you take one page, for each of those concepts, and jot down some notes about it. That thing the evil baron wants? Maybe map the caves it’s in and key it. Two or three sentences about the thing he wants and why. Another page has the hideout of some rebel scum on it, opposing the baron, and it’s under siege by the baron’s troops. Now you’ve got a little region detailed. Just sketches, rough ideas, and so on.

That’s what this adventure does … except it expands the rough ideas and sketches in to a more coherent whole. There are two types of pages in the adventure. The first are the one-pagers. These feature a map, either a dungeon or small region, that take up about half the page. That map is supplemented by about a paragraph of introduction/overview and then the keys proper. Monster stats appear on the map ,with arrows pointing to where they are. Special treasure, situations, etc also appear on map, as well as few other miscellaneous notes. The second type of page is the “text page.” These generally occur after the one-pager and offer guidance on “what’s next.” Not that you’ve done/visited/looted/escape from blah blah blah, here’s what the party may be wanting to do next, and how that relates to the rest of the support material. Where Stonehell used the supplemental pages to help explain the level, the supplemental pages here help explain the implications of what just happen, in relation to the other things going on, and offers advice to the DM in how to react to various party actions/needs/wants etc. For example, after the first one-pager, it notes that the party may flee to the sea, in which case Smugglers Isles or Village Bellrock would be places to end up. Or you could head to the nearby village of Turten Cot .. and how the people along the way are likely to interact and so on. Oh, so they go to the village? From the text: “Upon reaching Turten’s Cot, the party finds the village in turmoil, looking for heroes or mercenaries to aid them in their troubles. See page 8.” It helps both the DM and the players put the larger puzzle together to get a smooth and coherent game.

The adventure does a good job putting data at the DM’s hand. The actual regional map contains page references so you know where to turn to. The maps generally have personalities embedded in them. The opening map is, as the intro text implies, a scenario having the level 1’s imprisoned in the keep and they need to escape. A small table, on the map page, lists the keep personalities. Guard: just working the shift, bored, tired, irate, homesick, cheerful, nervous.” Or a servant: “fearful, despairing, resentful” or a (potentially) helpful smuggler: “cocky, sarcastic, mercenary” Everything you need on one page to run a delightful and color adventure. Doors are “stout”, locks are “brittle”, rooms smell “fishy”, guards “unmotivated”. It does a great ob of just using a word or two to jazz up the scene and bring it to life.

The maps and encounters are varied. The initial map is an escape from the barons keep. Then there is a small regional map showing a hideout of a bandit/rebel … and the enemy troops surrounding him. There’s a small smuggler city and dungeon pit for a different faction working against the baron. A hidden place, the castle dungeons, a dwarf tribe that mostly about negotiations and roleplaying … until the baron’s troops maybe invade at the end if HIS envoy detects things are not going his way. An old barrow with an ancient secret that impacts the baron, and a two-level cave map for the party to have a climactic battle with the baron. There’s no railroad here, just options. Roleplay, fight, explore, sneak … it’s great! And it’s all supplemented by a colorful wandering monster and treasure table. Amy the desperate pregnant runaway from the castle. Awakened raven with info, willing to trade for shiny stuff. Dwarven poachers with a slain deer. A snake oil salesman .. selling actual snake oil. A nice mix of specifics done in a terse format. Perfect.

There’s a certain density to one-page adventures, and that’s present here. Stone hell had a pretty minimal key/dungeon it’s one pager, but it expanded that by providing two (or three?) pages of additional material before the map, providing some context and additional information on the features of the map. Traditional one-pagers, and I would include this adventure in that category, try to make the one-pager self-contained. There are supplemental pages here, but they are more related to linking the one-pagers together rather than providing additional content for the one-pager proper. It’s this density and … rigor in vision? that makes this both a boon and a bane. On the one hand you’ve got EVERYTHING on one page that you can run from. The benefits of that immense. On the other, but limiting yourself to that format you are creating a dense set of text that can sometimes get in the way. I think this adventure has taken it about as far as you can, as close to the line as possible, in loading up the page while still being useful and readable. The Pathfinder stat blocks, notorious for being long, have been condensed well and the more complex/named NPC’s get pulled out to a separate page where their full stat block glory can be expressed. (although Ben still manages five to a page, an accomplishment for Pathfinder.)

I like this adventure, both in its content and in the form its forging ahead in. This little regional sandbox sort of thing, with a natural arc, feels a little like it sits somewhere between a good hex crawl and a more traditional regional/sandbox adventure. Tersely written, evocative, adventure sites with a relationship to each other and some advice/notes for the DM to link it all together. The one-page nature means you can pick it up and run it almost immediately after buying it.

It’s Pay What You Want on DriveThru … and is worth more than the $2.25 of it’s current average contribution. And it’s not showing up in search. And the preview isn’t working. The first map, Escape from Whitecliff on page four, is a good example of the one-pager. Personalities in the lower right corner. Stats on the map. A nice intro paragraph describing the set up that is short and full of flavor to use at the table. The key has bolded “interesting things”, like people and monsters. Take a look at entry A & C “stout door with a brittle lock” and “sister, weeping, with servants nursing bruises and welts.” There’s a lot implied in that text. It’s good.
https://www.drivethrurpg.com/product/210944/The-Fall-of-Whitecliff?affiliate_id=1892600

9 Responses to The Fall of Whitecliff