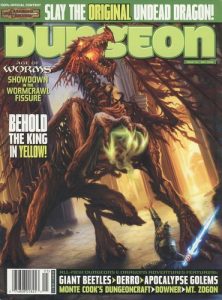 Home Under the Range
By Michael Kortes
Level 3

A linear “underdark” escort adventure with a farcical pretext. The party is charged with herding giant beetles through the underdark from one location to another. Five encounters later they reach their destination, currently the site of a pitched battle. Along the way you meet stone giants bowling, and three ambushes, all the while trying to keep the loses of the beetles low. I’s linear, and essentially a series of set pieces with the generally hated “escort mission” ltag attached to it. And yet … I have a fondness for the absurd, or, maybe, the ALMOST absurd. This is running right up close to the line. Generally I like my DM pretexts normal and my players to do the wacky shit, like come up with plans that say “I have the perfect plan! First we need forty giant beetles …” Too much from the DM and the games in danger of Paranoia ZAP territory. But this one? I don’t know. Something may have triggered my Personal Preference O’Meter, or I’m in a weird mood today.

It does get in and out in only about twelve pages, with half page art/maps on most that’s not a bad page count by Dungeon standards. It also has a hook I like. 3e-era players are looking for masterwork weapons at low levels. Sending the players to the dwarf hold and herding the beetles is a nicely little integrated response to the players wants/needs. THIS is the way plot os developed in D&D. Not by the DM but in response to what the players want. “We need/want this thing.” Well Mr and/or Ms Player, you can go get it here … Player driven action. (Even if it does fall in to the “then why don’t the dwarves herd them” sin of “can’t be bothered.”

And then there’s the wrong way to do things. Like this. It’s a King in Yellow/Yellow Sign themed adventures, with a group of travelling bards performing the play and turning villages in to aberration-monster zones. You visit a village and get attacked by monsters. You visit a town where the town center has gone to hell. You visit a city where the play is being performed in a playhouse. End. It relies on the party being do gooders. It has a one-page description of a NPC that somehow you are supposed to absorb and run, full of the usual nonsense that doesn’t need to be there because it has no impact on the adventure.

There are a couple of nice spots. The middle combat, the town, has the town barricading off the town center, keeping the madnes-creatures trapped there. The whole “town in chaos”, barricades, zombie apoc thing is an appealing concept, although they don’t really do much with it here beyond hearing things beyond the barricade. Too much tell and not enough show.

The first encounter, the village, has a manor home you can search. This is an abstracted manor home search. Roll your search check and the DM will give you a piece of information. I’m interested in methods other than “room/key” format for other types of actions. Room/Key works great for exploration. The whole Mind-Map thing works great for social environments, as does presenting things in tabular form. The question of “are there other formats for other adventure types” is one I find interesting. Is there a better way to present investigations? The method in this adventure, a search check with the DM then feeding information, seems too abstracted. It reduces an “Ah Ha!” moment to a simple die roll. Room/Key format may be cumbersome for this sort of thing, but just listing the “important” rooms and what someone can find in it would seem to be both better than the die roll and the room/key. It preserves the player agency, eliminates the “all D&D elements are die rolls” nonsense, and can be relatively dense/terse in presentation.

FInally, the hooks fall in to two types, both of which I find interesting. In one the players are almost inquisitors for the church of St Cuthbert. That takes care of the “do gooder” motivation. The other two are variations on the “Dying fan gets to watch Star Wars early” theme. Please go find the players, my favorite, I want to see one last time before I die, blah blah blah. It’s stupid, but I would TOTALLY ham this up, with pajamas, posters, drinking cups, etc.

Into the Worm Crawl Fissure
By James Jacobs
Level 19

Age of Worms adventure path, the second to last one. The party wander around three adventure locations, then “explore” a Kyuss shrine and fight the Kyuss herald: the dragolich. There is something going on in this adventure, but man is it a mess. There’s supposed to be a ghost, split in to three parts I think, that you can reunite to get help against the dracolich. I’m pretty sure there’s a vision the party has when they arrive at the site, which leads them to the first part, which leads to the other two. Those are the three adventure locales you can explore. It’s presented on a kind of small regional map with nine locations on them. But only a couple are actually detailed. For example, there’s the lair of a dragon from the last adventure, almost certainly dead now (because of the players.) That’s all you get. Why include it? If you’re not going to to do anything with it then what does it add to the adventure? This being Pathfinder, errr, 3.5, the state blocks frequently stretch to a full page, Combine that with all the background nonsense and the “used to” and “like to relax here” sorts of stuff that creates the text overload and you’ve got a mess. Better yet, the locations on the map don’t actually relate to locations presented in the adventure. So the map is labeled 1 through 9. The overview location page is labeled 1 through 9. The ACTUAL adventure locales are Part 1, Part 2, and so on, and you only know which witch is which by reading DEEP in to the text. This would have been so much better if 90% of the text were trimmed. Would it be good? I don’t know. Kyuss worms. Pools of slime, Hydras & chimeras, crazy lich, friendly ghost … it’s got the basic elements. A special callout to the dracolich treasures. A little overly described in places, but a scandalous dress, a nice violin, a large drinking horn emblazoned with runes and carvings of dead dragons.