Along the Road of Tombs 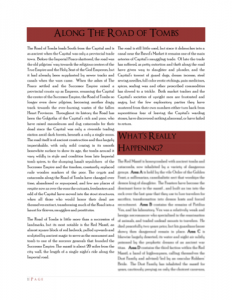 This free, 41 page dungeon adventure, with about 39 encounters, details four tomb-systems / lairs carved in to a huge mesa. It’s rife with factions, social play, weird shit, and has more than enough interesting stuff in it to keep a party busy for several sessions, including perhaps trips back at a later date, allies and so on. It reminds me much of B2 or Ironwood Gorge, a location to visit multiple times. The writing constructs a rich dreamlike tapestry of words in the various rooms in AS&SH style… and needs to be trimmed because it makes it impossible to find anything. It should be easy to drop in to almost any game. As long as you’ve got a printer and a highlighter.

The idea is that there’s a road out of the capitol, now seldom used, that has tombs all along it. There’s always been a bit of banditry, but things have picked up and the illegal folks in/near the city, running their craft through it, are feeling the pain. Rumors paint the center of the issue at The Red Mesa, a big tomb complex about a day away. The mesa is the center of the adventure. Carver all over with statues, tombs, etc, it houses four cave complexes, three of them connected in some way. There’s a small inn/waystop, a petty necromancers home, a sullen mythic tomb, and a group of hiding bandits. The innkeeps run a cannibal cult, the necromancer is dead of natural causes, the bandits only steal a little, unless threatened, and the one remaining ‘real’ tomb is mythic. In to this we chuck the party, probably acting as agents of the Matrons, a group of brothel owners who lair on the road near the city.

We learn almost all of this in the first page of the adventure. It delivers the background, the current situations, the factions and so on. It’s a great overview, full of flavor and supports the DM well in understanding the environment up front. It’s supported by three pages of rumors, one for talking to unsavory types, one for merchants, and one for the general populace. The rumors are excellent. Full of colorful characters and in-voice rumors. I often bitch about verbosity, and page bloat, in adventures (and will in this one also) but the rumors here are a good contra-example. Each rumor is almost a little mini-encounter, but it’s done in a way that organizes it easily and makes it easy to both run AND find. And that’s the key: usability by the DM. The goal is to support the DM and transfer data to them effectively during play. By placing the rumors in tables they can almost be eliminated from the word/page count of the adventure. Want a rumor? Here’s the table: run it. If this were integrated in to the text then you’d have to go digging. The organization/layout/presentation of the rumors supports the dm’s ability to run at the table.

The content itself is wonderful, and not just from the rumor table. A broken bureaucrat, ragged, his chains and badges ripped from his robes, tries to sell his worn sandals in an attempt to bribe his way back in to this job site. Strong stuff, flavor seeds laser delivered to your brain. A fallen titan, eternally sleeping ina cave-like chamber, awaiting a prayer to be said over him from the bloodline of forgotten emperors. An open pavilion on the top of mesa, surrounded by gold lettering, and the preserved naked body of a long dead general. The factions have notes on how they respond to intrusions, things they will try with the party, strong NPC personalities to use for the talking. And the talking isn’t just pretext; it’s real. There is real social interaction (probably) that makes this stuff useful and not just trivia. That could, through the party or the NPC’s, devolve in to combat, but it’s not the default. The rooms and encounters gets two or even three uses out of them. Friendly talk talk, the (probable) murder-hobo’ing, and then the exploration elements of tricks, traps, etc. It’s a well constructed and flavorful. Roads ‘debouch’ in to canals. It’s “… largely imperishable, with only mild crazing of its smooth bonewhite surface …” There’s an almost dreamlike quality to the language in places. It remind me some of the AS&SH use of language, except while I think Northwinds comes off cold I think this comes off dreamlike and mythic.

And, the language is also a problem. Or, rather, it’s one part of a problem with usability at the table. Taking a look at the (free) PDF, the first will become immediately obvious: the font. I don’t complain about this sort of thing much, except when it sticks out, and it sticks out here. Whatever font it is is a travesty in the eyes of readability. Old Man Lynch has trouble reading it and his eyes fight to easily make out the content. Not. Cool. Gus. Then we add in some formatting issues. Something has gone haywire in the formatting, or in my viewers display. Take for example the bottom of page 31. A normal 2 column layout somehow ‘breaks’ and the last two paragraphs, one in each column, belong “together” while the first column breaks above that last paragraph and continues on at the top of the second column. This whole section on page 31 & 32 seems out of whack. Finally there’s the writing proper. Gus’s dreamlike & mythic atmosphere is obtained, at times, by a writing style that degenerates in to walls of text in the various encounter rooms.

Room A1 of the feasthall, on page 12, is half a column long. The first paragraph is the front door. The second paragraph is the common room description. The third paragraph describes the employees, while the fourth details the sleeping & food arrangements. During play you’d be hunting for information, trying to figure out which information is where. Right off the bat, that last paragraph could have been a small table, or boxed off, instead of being in paragraph form. It’s reference data; pulling it out of “text form” doesn’t kill the vibe. Likewise the employee section. ‘Gear carried’ can be integrated in to NPC descriptions/stats and maybe employees boxed off or tabulated as well. These two changes make it 2 paragraphs to dig through instead of four. This is probably enough to get by. Another technique would be small section headings abiev the paragraphs, like Exterior, Interior, Employees, Prices. The technique isn’t important; the desire is to orient the DM to the text QUICKLY when they are scanning it during play.

Room C4, at the bottom right of page 28, is perhaps the best example of the strengths and weaknesses of the text in one place. “A chamber of torment for the souls of the one hundred and thirteen sorcerers slain by the ancient general, a testament to his power and alleged sainthood. The chamber is a cage of ancient wards and iron bars, containing a huge pile of petrified bones. One hundred and thirteen skulls hang from the ceiling in baskets of chain beyond the bars. A plinth, molded from the stone of the floor stands before the cage and proclaims “Look upon the bones of the fallen and ask how the great, the dread, the mighty and the powerful have come so low. I am the answer to that question, for my wrath carries all before it.” No signature is inscribed below this statement.” The first and last sentence are filler. Yes, they absolutely help work to strengthen the vibe … but only incrementally more than the core text of “113 skulls hanging from the ceiling in baskets of chains.” I note that there are two more paragraphs beyond this one.

There are some logic gaps in places that stand out a little more than the ones in B2 do. The necromancer has been dead awhile, people think he might be dead, but no one has gone over to his cave to look for him. Likewise the mythic tomb, and top of the mesa, are largely unexplored in spite of them being on a major road. The bandits are at least a little friendly with the necro, but haven’t walked round the corner to talk to him. Then again, the Caves of Chaos are two miles from the keep with a road going to them, so, you know …

The NPC descriptions are fully formed. These are fleshed out people in about three sentences each: descriptions, personality, history. I could quibble with some of the choices made, prefer the personalities up front instead of descriptions and bitch a bit about a sentence for character history, or things like The Boy hanging near Bruno but Bruno not saying The Boy is always near him … things that impact play.

The content of this adventure is good. It has strong imagery and imaginative encounters without the usual set-piece nonsense that modern adventures resort to. The one-pager about the road and the culture around it is great. The set ups are great … and probably a challenge for the party. I really like what’s going on. Its presentation, to the DM, is the major issue. The formatting, the extra language and that FUCKING FONT all work to help obfuscate. What’s that old saying about an artist knowing when to stop painting?

This is free, at Gus’ Dungeon Of Signs blog:
http://dungeonofsigns.blogspot.com/p/pdfs-to-download.html

3 Responses to Along the Road of Tombs