The Forge of Ilmarinen 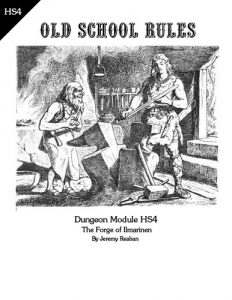 Ilmarinen the Eternal Hammerer was once widely worshipped by primitive people, whom he taught how to work metal. But once they had his knowledge, his worship was largely forgotten and his temple declined and was of course overrun by monsters.

This sixteen page adventure in an old “smith god” complex has sixteen encounters spread out over four pages, with another for the map and the rest of the pages being appendix material in the rear: new monsters and magic items. It is mostly a hack with only a couple of exploratory items. Nice treasure and all new monsters make this smarter than your average bear. The text has a weird thing going on where it is both to the point and padded out … a seeming contradiction.

Too many magic swords? Come on down to Big Ilmarinen’s temple and we’ll take care of it for you! We’ll destroy two of your magic swords and channel the power in to a third! The +1 sword glut can be a common game problem for some. Combined with the lust over higher ‘pluses’, the existence of a place like this temple is almost a hook unto itself. It motivates the PLAYER rather than character … and those are the best hooks of all. The actual hooks are pretty shitty: stumble across it, hired to investigate, or hear a rumor about it. Ok, the second one isn’t that bad since its related to that quality of player power envy. Just dropping a rumor, or crafting some failed expedition or some such is a decent way of introducing the place. You’ll get little help from the adventure through; the entire introduction is a column. I love a terse introduction and this one has it. Three sentences on background, three on hooks, and a short section on general dungeon conditions before the adventure keys start at the top of the second column. Perfect for an adventure like this. I might have suggested tightening it up even more, cutting the lame hooks and hook intro paragraph, and using the space freed to add a bit of color to the “tavern rumor” hook. But, still, terse and doesn’t get in the way.

The encounters are almost all straightforward hacks. Enter a room. See a monster. It attacks. There’s a place for this, but the over reliance on it detracts from adventures. All but one of the non-trivial encounters is a hack. Had the rooms been layered a bit more it would have been much better. What I mean is having additional elements in a room. If the room has monster then maybe it also has trap. Or there’s something unrlated to the monster to investigate. Or the monster attacks WHEN you do something … like fucking with the hole its living in. There are skeletons on a table in this adventure. When you come in to the room the skeleton heads detach, flame on, and then attack. That sends the wrong message. If, instead, FUCKING with the skeletons caused their heads to fly off then you’re closer to room that works better. Better yet, if you put an obvious ruby in the skeletons mouth THEN you’ve got a great situation. The players want the ruby. EVERYONE knows what’s going to happen when they fuck with that ruby. They get to make the choice. A very tempting choice to push the shiny shiny red cherry button … Madcap plans are created. D&D happens.

The writing is also a bit weird. It’s pretty fact based, which is what I think I mean when I cite it as “straightforward.” But it’s also got a pretty loose writing style that I think detracts from the adventure. Room four notes that: (bolding mine)

“Along the eastern wall are a stack of twelve kegs, three rows of four each. The curious thing is that the kegs are made out of an unusual metal, not wood. Half of the kegs are empty. The others may be opened, and if so, out comes a very skunky beer, long past its prime.

Along the western wall are two crates, both made of wood. The southern crate is opened and inside is empty, save for some straw like material. The northern crate is unopened. If opened, it will reveal 8 smaller sealed cases, each containing 50 rolls of summer sausage (1 lb. each). Amazingly, it’s still edible.”

What this entry does is describe a typical storeroom. We all know what a typical storeroom looks like. There is no significance to the crates being on the western wall, or being made of wood. There is no significance to the southern crate being open. Looking at those first three sentences, if they were replaced with a different description, or did not exist at all, the adventure would be no different. I can make a halfway decent argument for the same being true of the first two sentences of the first paragraph. If the text were removed, and it has no impact on the adventure, then the text has no impact on the adventure and should not be there in the first place. Don’t get me wrong, there is ABSOLUTELY room for painting a vivid picture in the DM’s mind (in a terse way.) That’s a legit reason for text. But bare fact-based statements seldom accomplish that. I would argue that most of the room descriptions in the adventure fall in to that category.

I do want to note the treasure and monsters in this adventure. Both are excellent. Jeremy has created an all new slew of monsters, relying on nothing from the “normal” books. Long time readers will know I love this. I love it when a party encounters something that they have to struggle with. New monsters represent the unknown, mystery. The party doesn’t know what special attacks or defences they have. There is an element of fear. There’s a place for returning favorites, but almost nothing generates anxiety like meeting some beasty with unknown abilities. The treasure is also a cut above. Room one has a bag with a mitten, stained with blood, with a gold ring inside. A monocle with a crack in it. Green troll jerky wrapped in a dirty piece of cloth. These things tell a story; they make your mind tell a story. They make you want to know what happened. There’s an eye, ripped form a gnome, that you can use for true seeing. The amount of extra work to make something more interesting than “state: 100gp” or “sword+1” is pretty small and I wish more designers would add value that way.

There are a few other misses. Two statues grab people and go jump in to lava. Great encounter! But the text refers you to the magic pool room instead of the lava pit room. Not huge, but indicative of the need for a second read through.

It’s PWYW on DriveThru. The preview on DriveThru is a good one. You can see the treasure for room one at the top of page three. The storeroom text is on the same page. In fact, the entire adventure is available in the preview. https://www.drivethrurpg.com/product/209706/HS4-The-Forge-of-Ilmarinen?affiliate_id=1892600

4 Responses to The Forge of Ilmarinen