Forgotten Fane of the Coiled Goddess 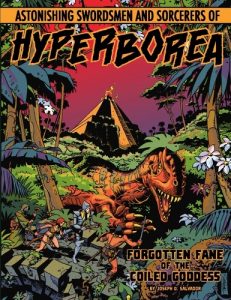 More than a month ago, your party found itself in Port Zangerios, where you heard of an Esquimaux thief selling a treasure map. Low on wealth but high in courage, you sought him out. The man turned out to be a fearful ex-slave who had “acquired” the map from his Ixian master. The map is incomplete but shews the Isle of the Serpent in far-off Lemuria, where rests a fabulous treasure called the Feathered Crown of Nanasa (or so thought the Ixian). Pooling your money to purchase the unfinished map, you bought passage on an Amazonian trade ship. After passing through tempests and torrential rains that shimmered with auroral light, you have come to the great city of Jhaman Ket. Now you must seek out the location of the Isle of the Serpent.

This is a sixty page hexcrawl/lost temple adventure on a jungle island with dinosaurs. It has a short eight page section on Lemuria, ten pages of new monsters appendices, etc, and the main hex crawl and titular temple in thirty four pages. It follows an “expansive minimally keyed format”, falling in to some of the usual traps with expansive text. The snake temple map is interesting enough, looking like a “main hallway with room s off of it” design but offering multiple entrances and the “Conan hole” in the ceiling. It comes off as bland.

I won’t cover the Lemuria fluff. Fluff is fluff and you either like it or you don’t. It does an ok job describing the general region of Lemuria, politics, towns, etc. It tends to the historical and overly specific “Round shields of iron and bronze are both in use …” I like my fluff different, driving action and all full of mystery.

For the main adventure, comparisons to Isle of Dread are inevitable. Be they inspired by the same Appendix N texts or simply hitting on the same themes, Dread was the first hex crawl many saw, it was on a jungle island, and had a ruined temple. Combine those elements, as this adventure does, and Dread comparisons are inevitable. The island hex crawls are, essentially, the same. Dinos, jungle, etc. There’s no friendly villagers and the temple at the center of the island, on a plateau, is more organized and less abandoned. Otherwise, you hex crawl through the jungle, see dinos, and try to not die.

The wandering monsters are rolled once an hour on a d6, with a 1 indicating a monster. That’s four encounters a day, on average. Certainly not EVERYTHING is hostile, there are some herbivore dinos, for example, but the rate is high, it seems to me. The island IS only 3 miles across, with six hexes to the mile, so a party with their ass in gear should mitigate most of that. Camping is going to be a bitch though.

There are heat rules. I have an ancient enmity with environmental rules. They always sound great but they tend to be cumbersome in practice. In this, every two hours you need to make a CON text or be exhausted and rest an hour, if you are encumbered or wearing metal armor. That’s one way to get people out of their armor: tedium. I don’t disagree with the theming, just the tedium required to get to the end result. Which brings up an interesting point. Given the focus on the wanderers every hour, and the heat checks every two hours, it seems unusual that movement rates are not covered. Each hex being 275 yards, it seems natural that a movement rate chart would be included on, say, the island hex map. Movement, and what you can see from your hex, are key elements in a good hex crawl that are missing here.

I think we can all agree Dread was minimally keyed and tersely written, except perhaps for sections dealing the customs of the villagers. I think the adventure here is also minimally keyed, but in contrast to Dread it’s verbosely written. Common elements are expanded upon in at text style that emphasizes plain factual data. Some North Wind adventures have a very tortured writing style that feels forced. I’m a fan of esoteric words and larger vocabulary in adventures, but I’ve come to expect to see this implemented in a cumbersome way in the usual North Wind adventure. This one has the opposite problem. The descriptions are plain to the point of being a killjoy … but the text goes on forever. The wandering monster table is three and half pages long, each monster getting its own stat block and short description. “Weighing up to 500 pounds, these seven- foot-long chamæleonic amphibians catch prey with their sticky tongues and can swallow a full-grown man whole.” Uh huh. You mean exactly what’s included in the stat block below that description? Occasionally there is a bright point like “giant ticks drop from trees”, but it’s generally this kind of non-useful text. It doesn’t really drive the adventure anywhere.

Similarly, there is an emphasis, in places, on historic uses for rooms. “This room USED to be used for …” or “In antediluvian times there were runes here …” These don’t help. They instead obfuscate other words which MIGHT help run the adventure. Now. Right Now. What’s of use to a DM running a party in the room RIGHT. NOW. A room that says “Study: Sometimes Bob used to read books here.” is not useful. That’s what a study is, a place where you hang out and perform study-like activities. We know that from the room name.

The encounters can be LONG, to little effect. Room three of the temple is a normal guardroom. Nothing really special. Snake-man pictograms on the ceiling. The text is a column long. An intro paragraph telling us the room is 20×30 (which we know from the map) and it’s got a 15’ ceiling (irrelevant to the adventure and doesn’t really set a mood at all) and then three GIANT stat blocks that look like they came straight out of the bad old days of 3e and/or Pathfinder. It ends with another paragraph telling us where the exits lead to which, again, we already know from the map. A column of text. This sort of expansive use of text for “normal” things is perhaps the adventures greatest fault. The temple has interesting layout for what is, essentially, a linear hallway, but the emphasis is on the mundane instead of the unusual. There’s a giant jeweled idol in one area, the kind every adventurer dreams of prying the jeweled scales off of. We’re told that desecrating the idol should causes curses and misfortunes as the DM sees fit. But, THAT’S what the fuck we’re paying the designer for! We’re not paying to be told that a room is 30×20 feet. We can see that from the fucking map. We’re paying for the unusual, the interesting, the imaginative. A constructed world of interlocking parts. We’re not paying to be told to roll for our treasure or make out own snake-god themed curses. A cult village doesn’t need to have gonzo elements to be good. But it doesn’t need five pages, as this one does, if all you’re going to tell us is the mundane. Placing an emphasis on how the party will interact is where the effort should have been spent. Guards. Patrols. Things to thwart sneaking around. To get to the temple, and so on.

The preview, on DriveThru, is only four pages long. It doesn’t really show you anything of the text you’re likely to encounter in the adventure. That’s not a very effective preview. It does include the table of contents, which is helpful, such that it is.https://www.drivethrurpg.com/product/156193/Forgotten-Fane-of-the-Coiled-Goddess?affiliate_id=1892600

I’m disappointed with this adventure. Thus far, I’m pretty sure that the best AS&SH adventure I’ve seen has been the Crypts & Things adventure Blood of the Dragon. If you know of a better one then stick it in the comments. I don’t feel like anything I’ve seen so far lives up to the potential of AS&SH and I’d like to make sure I’m giving it a fair shake.

8 Responses to Forgotten Fane of the Coiled Goddess