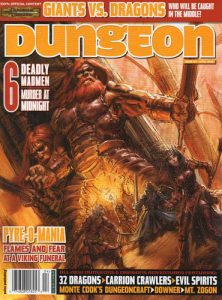 I cannot stand this fucking adventure. It’s Shadowpunky Eberron, which is not my favorite genre, but the real reason is that the design SUCKS SHIT BALLS. It starts with the usual ‘lets build excitement with a starting combat’ bullshit common to these plot shitholes. Some prisoners, being paraded, escape. I guess the party is supposed to give a shit and stop them. Or Not, and just watch. Whatever. There’s some pretext about “investigating a theft”, but it ends with the villain just inviting the party to his house. There’s a big sidebar that says “in order to make the final two encounters of the adventure more exciting, it’s best if the party are racing against the clock …” Jesus fucking christ. NO ONE CARES. Rather than give us an adventure to run its just a bunch of plot bullshit. What’s the massive amount of text spent on? Here’s an example, a detailed account of how a trap works, that amounts to “explosion in 5 rounds”:

“A bell hung on a cord rings when the door to the office is opened. This cord runs through the ceiling of the office to the laboratory above, and activates two separate mechanisms when moved. The first releases the deadly acidic fire gar contained in the large steel tanks in the lab. The second mechanism sets a pendulum into motion with a tindertwig attached. The pendulum slowly picks up speed over the course of the next ten rounds before striking the twig on the wall of the tower and igniting the gas.”

Yeah, you got a brand, and can publish anything you want. It’s no wonder the magazine died. Blaming this shit on ‘electronic’ is BS, it just sucked because no one gave a shit to produce a decent magazine.

This nordic adventure has a nice vibe going on, right out of the gate. There’s going to a funeral for a viking king, a big pyre. During it an evil dragon spirit is awakened and the party is charged with destroying its vessel, a tooth lodged in the dead kings bod, in the river of fire in the old dragons lair. This intro could be a shit fest, but it’s skilfully handed. The awakened dragon is really just a fear aura, causing chaos when there should be respect. The hooks to get the party there involve a dying, valiant exiled viking asking the party to return his helm to people, and thus stumbling on the funeral, or a country in the south sending the party as an embassy, along with a sizable funeral gift, as a sign of respect and to curry favor with the vikings. Sorry, Ice Barbarians. The entire intro makes sense, is not overblown, is still exciting and interesting. Plus, destroying the dragons spirit by transporting it to his former lair and chucking it in to lava is a nice appeal to both folklore, the embedded Tolkein, and that destroying artifacts table in the DMG. It FEELS right. The actual dragons lair is small, but has some nice elevation features. It’s a short adventure, but full of flavor. Crows in the caves, the dead dragons body, the shattered remains of the dead kings magic sword … It suffers from the word bloat common to Dungeon but, if you want something G.U.D. GOOD to steak from then this is IT.

Kings of the Rift
By Greg A. Vaughan
Level 18

Another issue, another Age of Worms; installment ten of twelve. This time you’re getting the phylactery of a dragon servant of Kyuss. It’s hidden in a city of giants currently besieged by dragons, also trying to get the phylactery. It starts with a DC 30 lore check … or you can just ask a sage, either way the information is fed to the players. The “besieged city” is handled pretty badly, even Hoard of Tiamat opening is better, and basically involves getting attacked by dragons of varying power any time you go anywhere. It ends with exploring mindlessly in rooms, killing people, and taking their stuff. Which is boring as fuck. Multiple 300+ and 400+ hit point fights. Lots of them. That’s fun, right? It basically ignores, or gives the barest pretext to, the most interesting part of the adventure, the political situation and factions within the besieged city. This adventure doesn’t know what it is, and it shows.