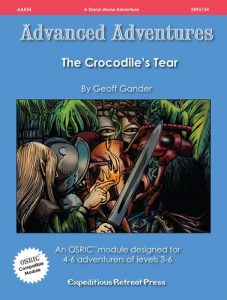 A wealthy patron is outfitting an expedition to sail to the mysterious southern continent. The goal of the expedition is none other than the legendary Crocodile’s Tear: a massive magical emerald! Many tales are told about the southern continent, most of which paint it as a disease-ridden jungle filled with hostile natives, reachable only by crossing a pirate- and monster-infested sea. As the port winds fade into the winds of the open sea, the sails of The Mermaid billow firmly. Will the player characters survive the voyage, and will they find more than they bargained for? Oh, and was it mentioned that that two other trips set out before this one only to be swallowed up by the dense jungle…

This thirteen page adventure has a 25 day sea voyage, a forty mile jungle trek, and then a nineteen room abandoned temple, all to recover a giant emerald. It’s sparse on content, with only a few encounters in each area and is pretty free with the generalizations, rather than the specifics that bring an adventure to life, where the inter-village politics are concerned. Considering the jungle is one third of the adventure…and there’s no wanderers for the jungle, AND the ocean voyage is parse, AND the first ten rooms of the nineteen room temple are devoid of t-birds for daddy to take away … it seems likely that the adventure was built around a single encounter, the last one.

The adventure essentially starts with the a sea journey of 25-ish days to the fetid “southern continent.” You have 5 encounters to pick from for wanderers: a pirate ship, a skeleton ship, a squid, a sea hydra and some flotsam … “The GM should decide whether there is anything of interest.” The reviewer already has. No. No there is not. This gets back to the old issue of value being provided. Is it enough for an adventure you buy to just list a monster encounter, in ultra-minimal keyed format? That is what this adventure is doing with the wandering monster table for a 25 day sea voyage. What value does this content add over the tables freely available, or included in the book? “Giant squid attacks” is not value.

Likewise the 40-mile steaming hike through the fetid jungle with hostile natives. Only in this case there’s no wandering monster table at all. Or much of an adventure, really. Just the description of a couple of tribes, one paragraph each, and a couple of village descriptions, only two of which are likely to be relevant to the adventure. They can be summed up as “friendly” and “hostile”, with no other interesting roleplay opportunities in them. There’s a little bit going on with a couple of other villages, but not much more than “they tolerate outsider better” or “they have pearls to trade”, and, they are unlikely to come up in play since you’ll have a guide to take you directly where you want to go.

The temple is partially submerged in a lake, which has some interesting aspects as you attempt to build a raft and get to it while avoiding the hostile natives in the nearby village that also fish in the lake. After that it’s in to the ziggurat. The first ten rooms are, essentially, empty. They might contain a minor treasure or two, but the only thing mildly interesting is a secret door to a hidden sub-level. Under that is five or encounters in a linear map. It is most likely here that the first monster will be encountered” 6 fungus men and a crocodile. Finding the emerald there’s a brief time travel scene where you fight an evil king and his warriors, with the fate of the emerald (full power magic item or just a ‘minor’ 1d6 healing a turn) being decided.

So, book wandering monsters in the sea. No wanderers, or encounters, in the jungle. Three in the temple (probably.) What, you might ask, is in the adventure.

The usual nonsense, I sez me. “The king used to use this room for …” and boring descriptions of boring filler rooms. Over and over. This room once contained a chapel. The old king spent much of his time here. The wall paintings have been defaced … but there’s no ‘adventure’ or clue related to that, so it’s just window dressing. This room once housed. It’s frustrated just how little content there is and how what little there is fails to drive action. Detail, without being related to driving the adventure, is worthless. Further, it tends to distract and get in the way. Are there exceptions? Sure. But that’s why they call them exceptions. For almost everyone writing an adventure that detail will be worthless, just filler words to pad the thing out so you can get your pay-per-word fulfilled.

It’s $14 for a 13 page PDF on DriveThru. The preview will show you the ocean voyage and the “background” to the jungle, and map illustrating why most of that background is useless.https://www.drivethrurpg.com/product/189645/Advanced-Adventures-34-The-Crocodiles-Tear?affiliate_id=1892600