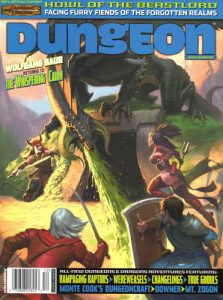 This is a murder mystery. Someone is killing people in Sharn. It tries to do the right thing. It’s organized in to locations, murder details, and other events. This is a good style for a murder mystery, recognizing that the locations are just a framework for the events to take place in. It’s got a nice NPC summary with names, roles, and rumors about them … but then leaves off their locations and their personalities. The murder events are laid out with details of the murder and then clues that can be found. There are a couple of false leads with events associated with them also. The general investigation/information you can find out, could be summarized, and a few more NPC’s could have been included, as well as a few window dressing events, like hysteria in the neighborhood, etc would have been nice. The hooks are not exactly original, but do have some nice quirks. “Seeing the first murder” hook has the body falling off a balcony and landing right in front of the party … an oldie but a goody. The other has the guard hiring the party to investigate. Always a lame hook, this is spiced up by having the sergeant being REALLY dumb. Like “beat things with a club” investigation-style dumb. The large amounts of worthless text and torturous writing style, which takes forever to get to the point, makes the thing hard to use. It’s highlighter and notebook time if you want to use it … but it IS salvageable if you want to put in the effort.

A Gathering of Winds
By Wolfgang Baur
Level 11

Oh god. I had manage to forget about these adventure paths. After a fight with a black dragon the characters explore a Tomb of Horrors style tomb. Too much backstory abounds and the usual mix of undead, golems, and bound guardians, along with tortured traps, is present. The map is a bit more interesting than most linear Tomb knockoffs. There are a couple of nice little encounters thrown in to the usual ToH garbage. There’s a living door/portal that can get AoO’s on people as they pass through. It gets a full 3e monster write up as a “ghoul”, because god forbid something not be explained, but it’s still a nice little encounter. There’s a cute Salamander noble, with the dialog “so sorry to be stabbing you in the vitals old chap, forced becaused of conjuration magic you know.” Finally, there’s both a true ghoul and a shadow spider that both have some personality. It’s the personality, and social aspects, of these encounters that bring them in ahead of the the usual Tomb of Horrors dreck. It’s also NOT afraid of handing out good magic items, with four or five being present, including a part of the rod of seven parts. I’m having trouble with the usual bits: the pay per word bloat, uninspiring descriptions, and ToH style, but maybe you won’t.

Wanna be “famous?” Figure out high-level D&D. This shit fest is an excuse to put AC 41 & 200HP monsters in front of the party. A god tells the mayor trouble is coming, but he can’t be bothered to spare people to look in to it .. .and appeals to the party. So, shit hook. And you get to look forward to stat blocks pages that span one and a half pages. There’s no arc from low to medium to high. No advice for high that’s worthwhile, in a meaningful way. Domain gets you a little way there, but beyond that?