The Ghost of Jack Cade on London Bridge 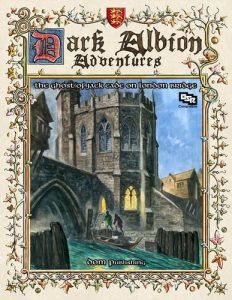 There’s a spooky ghost on London Bridge! Can the party help?

This is a 28 page investigation/social adventure in a pseudo-historical/fantasy urban locale: london bridge. It’s presented in a more sandboxy manner than the usual linear plots-based dreck. It describes what’s going on, the people involved, and the locations on the bridge, and then leaves the party to figure out what they want to want to do. This is all adjudicated by the DM using the materials presented in the text to roll with the punches and determine what happens based on the backgrounds & data presented. You know, D&D. Thus the adventure groks the overall goal/vision but falls down in the execution: I don’t think it’s laid out in a manner that helps the DM run it.

The setting is Dark Albion, a kind of pseudo-historical europe that will be familiar to those experienced with the same sort of thing in Lamentations of the Flame Princess. It’s a decent setting for a gritty urban adventure … gritty urban being a favorite genre of mine. As an introductory adventure it creates a nice hook: the party is, each individually, on their way to a pilgrimage in Canterbury, which traditionally starts in a chapel on the bridge. With a few days to kill because of a delay, the party sees a terrified woman rush in to their inn and corner a priest with tales of a ghost. As the only other people in the inn, he seeks the parties help. There’s enough extra to make it more than the usual empty adventure pretext.

The text gives a brief summary of what’s going on and then expands on each of the various aspects. There’s a little bit of history and then a description of the various main people in the set up. A brief description of how the ghost appears and what people do, a brief description of the major adventure locates, a brief description of some shops for the bridge. The adventure comes from how the party chooses to approach the hook. Go looking in to places? Asking questions? Hanging out to catch a sight of the ghost? Nothing is programmed in the adventure as a plot and all of the descriptions must then be used by the DM as a resource to respond to what the characters are doing. This is a great way to organize a more social/investigative adventure. There may be better ways, but if there are they don’t immediately spring to mind. There are some good businesses for an urban environment that will provide some nice GAMEABLE content for the party to have fun with as well some good loose-ends on where to take the party after the main adventure completes. The text is trying to provide a framework, resources if you will, for the DM to take the inciting event and then respond to what the players do. That’s exactly what this sort of adventure SHOULD do.

But, notice I said “trying to provide.” The gets itself in to trouble. There’s too much, even in this short adventure, to hold in your head. That means you have to refer to the adventure during the adventure. And the adventure doesn’t make it very easy to run at the table. The font is small, the data is organized in long paragraphs. Data is spread out throughout the book. When you do find a logical section then the data you need/want isn’t present. In one core building everyone inside gets their name stated in their little romo description. Except for the main guy, who owns the building. His name is in the intro section. One woman, a wealth of information, owns a shop. What kind of shop? Not stated.These are minor nits issues but lend to the general theme of the … unsuitability? of the text at the table.

This marries two concepts: background exposition and stickiness. I usually rail about excessive background information and I usually rail about encounters that are not tersely written. Except when the encounter is sticky. And except when the background information is relevant to actual play. (And not in some bullshit sophistry like ‘it MIGHT come up in play!’) In both cases we appeal to the general use: it can’t get in the way of actually running the game at the table. Stickiness helps there. In reusing my favorite example, you see the name “Old Bay’s Cave” and you know generally what’s inside and how to run the room without reading more. Stickiness and exposition can be exploited, together, by proving some summarized information. A good example is Maze of Blue Medusa. Each room gets a decent-sized write up. Let’s assume you read the room once, sometime before you actually run the game. If you never look at that information again you will, when running the game at the table, remember some amount of information about the room. One option is that you could run then run the room, from memory, without really doing much more than glancing down at the text. You would have some degree of success in running the room by using the text as inspiration, both from what you remember from reading the text beforehand and whatever you see in the glance at the big paragraphs. What Maze of the Blue Medusa does is then provide your failing memory further cues. It says “hey, here’s this picture on the map which is related to the room” … and you remember something more of the encounter from that cue. But, and more key, it also provides a little one or two sentence summary of the room. It is from that summary that most of your memory cues stem from. It has found a way to provide exposition on the room AND make the room usable at a glance in play while losing very little of their key nature. That is what this adventure, and many other adventures with dense text, sorely need.

That’s why I like summary information. Read the adventure once and then refer to the summary sheet to prompt your memory, with occasional glances at the text. That’s what this adventure needs. It needs a little timeline. It needs the NPC’s summarized with personalities (a stats sheet for enemies IS provided, which is QUITE welcomes! As would one for people/personalities since this is primarily a social adventure …) A timeline, a social summary, a location summary, all on two or three pages, would have made all of the rest of the exposition fall in to line and give the DM the tools they need. Instead you get to buy a highlighter and invest time in highlighting and making notes on a pad of paper.

It’s an ok adventure, it’s just hard to use in play. A little more personality for the NPC’s, a little more timeline. Some summaries. That would have turned it in to a good adventure.

The preview, on DriveThru, will give you a good idea of what to expect. The last couple of pages, in particular, show you what kind of descriptions you get for the locations, as well as the general timeline of the action (in text/paragrapgh form, rather than timeline form.) What’s you don’t get to see are the supplemental businesses on the bridge, in the back part of the book, which should add quite a bit to the adventure.
https://www.drivethrurpg.com/product/153587/DAA1—The-Ghost-of-Jack-Cade-on-London-Bridge?affiliate_id=1892600