Ghost Ship of the Desert Dunes 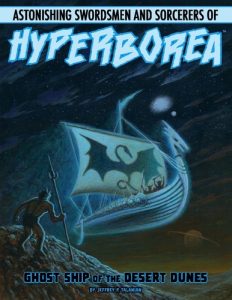 Somewhere in the depths of Diamond Desert lie the skeletal remains of Ymir’s Serpent, a legendary Viking longship. In days of yore, Sigtrygg Forkbeard led his company upriver, piercing the desert’s hostile heart. There the Vikings unearthed a lost mine brimming with green diamonds, but the River Æolus desiccated as the Serpent prepared for launch, and the ship was swallowed by the dunes. Forkbeard and his company were never seen again, but tales of a shimmering Viking ghost ship gliding over the dunes persist to this day.

This sixty page adventure takes the party through a border-village on through the desert to an old mine. There’s a nice variety of encounters, but the final dungeon skews hard to the “linear” side of things, in spite of the more open-ended border village and desert. It’s all wrapped in text that carries Talanian’s distinctive voice; a dream to some and a nightmare to others. There’s a real adventure here, along with a lot of Harn-like detail. Your tolerance to wading through the prose will determine your ability to run it.

The hook here is pretty lame: you’re hired by a wizard (“a male witch” the text kindly tells us) to take him to a lost mine of green diamonds, a a gemstone that can be rare and dangerous. What saves it is the NPC, the wizard in question. He’s got a pegleg and a distinctive arrogant/asshole/disdainful personality to go with it. That slowly changes as he closer to the mine. And his eyes glow. Green. Greener as you get closer. Nice NPC!

Off you go. You can stop off at a village on the edge of the desert to gain a level, from 2-3, under the pretext following up on a green diamond rumor. From there you trek through the desert, with a couple of distinctive encounters, until you read the mine … which is really quite a linear dungeon. The titular ghost ship is a rumor, and maybe flies around the desert a little at night if the wandering table turns it up.

The adventure here is a good one with a nice variety of encounters. The initial village adventure is a nice little social wandering that is well supported by the NPC’s in the village, with decent color. It’s supported by a nice little summary as well as a note of the key locations. There’s a nice rumor table as well, to add some local intrigues to the mix. It centers around a local scandal, with shades of Smeagel, brothers, wise-women, and a wildman. The more the party looks in to things the more color comes out and the more hints they get about what they are up against. The wildman lairs in an old temple. The entire section, from the village to the temple, is a nice, and colorful, little open-ended bit of adventuring.

From there the party ends up in the desert trekking to the old mine. There are a handful of places detailed as well as an “advanced” wandering monster table. Let’s hope that the party keeps their ules around to maybe feed to any purple worms that show up. A handful of small, but colorful, adventure sites are included, although I doubt most parties will encounter more than two or so. Still, they are quite nicely done. An old gem mine, dead atlanteans with a flamethrower, ant hills, and a giant spider are featured in one small encounter. In another the NPC wizard meets an old friend, a hermit. And almost certainly ends up blasting a hole in the dudes chest. Man, that NPC wizards is THE. SHIT. from an ‘adventure color’ standpoint. The gem mine, at the end, is more than a little linear and the ghost ship may not even show up. But still. Pools of water. Vermin, like Black Centipedes, slimes, a giant ape. Ancient technology. Its got lots of nice encounters down there.

Let’s address the gorilla in the room: Talanian’s voice. Jeffrey Talanian is one of the few (only?) people writing RPG supplements who, if formatted the same, you could tell who wrote the thing without their name being attached. Dude has a seriously idiosyncratic writing style. Grammer. Vocabulary. Detail. They add up to something more than the usual “technical writing” style that most designers use. It’s an acquired taste that I haven’t acquired. I admire that he has a distinctive voice. I just wish he tempered it more. “This natural cavern was worked to a gradient to accommodate the mining operations that took place here.” He means, of course, “the cave slopes.” I find his writing style exhausting, having to work through it to figure out what he’s trying to say. It’s like your car’s manual was written in the style of WIlliam Hope Hodgson’s The Night Land. On of the primary conceits of the tenfoopole is that the adventure is, first and foremost, a tool to be used for running a game at the table. It is, therefore, a piece of technical writing. A peculiar type in which artistic license MUST be taken with language in order to deliver terse and evocative bursts in to a DM’s brain. All perfectly organized. Dionysus and Apollo, together at last. Too often I feel like I’m fighting the text in this. His archaic style obfuscates rather than enables, and often to little evocative effect. “The dais is dominated by an eight-foot-tall, verdigris-encrusted bronze statue of a cobra set within a glyph-incised alcove.” I assert that description, in spite of the vocabulary and grammar choices, is boring. Boring in the way facts are boring. Yes, it tells us what’s there. But it doesn’t necessarily inspire us, the DM, to a great mental image.

Talanian also deals with ecology and this is where the Harn comparisons come in, or perhaps the MERP region supplements. The village the party stops at has a festival once a year, that’s fully detailed. Harvest times are detailed. One encounter in the desert, unlikely to happen, is with a field of cactus. Which have their flowering seasons detailed and the fauna attracted to them. “… and small bats pollinate the pink and white blossoms of the early Tempest [spring.]” Uh. Ok. The ecology here is rich, both in the desert encounters and in the others. But this isn’t a MERP regional module. It’s an adventure to be run at the table and EVERYTHING in the main text must contribute to that. There’s a place for extra detail. It’s called an appendix. Many designers could improve their products by putting the extra detail in an appendix and referring to the page in the text. The village, likewise, suffers from this ecology fetishment. The village lies down at the base of some hills/cliffs. Up top, scattered along the edge, are some totem poles. There is one off-hand remark about this mid-way through the village, in the description of one of the shopkeepers (ok, a monk sect.) Something along the lines of “they main the totems around the village.” You don’t really learn they are there until you go to the wilderness text, after the village. Sure would be nice if you knew about it immediately …so you could tell the party about it immediately. Instead it’s like you’re reading some weirdly laid out cultural reference tome of the village and have to be intimately familiar with everything before you can get the big picture. Not to appear to be harping, but the cactus field is an excellent short example.

I have one more general complaint that will make me sounds like a petty ass: the use of italics. I don’t know if it’s the font, the kerning, or what, but the italics in this makes my head hurt. All of the read-aloud, sometimes a couple of paragraphs worth at a time, and other special thing, like trease, are in this italics font. I LOATHE it. It’s almost like trying to read a small italics cursive font.I suspect it has something to do with the “main” font, and readability. Whatever it is, it drives me nutty.

You gotta dig out the information in this one. But if you do you’ll have a nice little adventure, with a decent amount of the human condition driving aspects of the secondary situations encounters. Which is both relatable and something not very many adventures do. The result is something that feels a little gamma world-ish. Several fantasy environments, from Tekumel to Blackmoor, have a kind of post-apoc vibe deep inside of them, even though they are fantasy games. This adventure fits that vibe.

The preview on DriveThru is worthless, showing you just the cover and title pages. https://www.drivethrurpg.com/product/156178/Ghost-Ship-of-the-Desert-Dunes?affiliate_id=1892600

12 Responses to Ghost Ship of the Desert Dunes