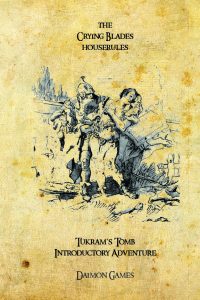 The…village is abandoned, and within one hour walks from the tomb. There is not much left: the wooden houses have rotten and collapsed, and only a few stone buildings still sort of stand. There’s nothing to loot, there’s no food, no tools, no riches. Centuries have passed since when the village was abandoned, and anything value has been already taken by others.

This is a sixteen room twenty-eight page tomb of a barbarian. It is, generally, a tomb full of traps with a couple of undead or statue encounters,and leans heavily to the “quiet exploration” side of the D&D adventure spectrum. It’s overly verbose writing style combined with a conversational organization style leads to difficulty in finding information.

There are lots of pages in this but the actual content is a bit light for a sixteen room tomb. A rumor table, a random villager table, and a brief wilderness monster table make up the first twelve pages, interspersed with a generous amount of public domain art. The rumor table is nothing special, and the random NPC table seems a bit out of place. The wilderness monster table has a few entries and each one has a bit more to it, by way of an extra sentence, than a pure listing of monster stats. The vampire tree holds the corpse of a old victim. The fairy demands gold coins and favors one PC. The lone wolf is lonely and scrawny. These extra little bits help, I think, a DM create a nice little scene around the monster with minimal effort. There’s also a ruined village provided, on a page, with no map. It’s basically a ruined tower next to a graveyard and some random dead show up at night. It’s long for what it is but it’s still a nice little encounter.

The tomb is based on a real map and is almost entirely of the trap/trick variety. There are a variety of classic tropes, including a balanced scale trick, the old spikes from the ceiling, creatures that follow you out of the tomb (if you loot) for revenge, and an exit tunnel that collapses if you loot the main tomb, forcing you to dig out. I like the encounters. Many are pretty classic tropes and those are always winners. In addition, it includes little map snippets on most pages to help orient the DM to nearby rooms/encounters. That’s nice … but probably a little unneeded for a dungeon this small … IE: the whole map fits on one page and is easy to follow.

The whole thing has a very slow feel to it. Imagine a slow and careful “real life” exploration of a tomb filled with traps and the like. That’s the vibe this adventure puts out, probably because of the lack of any pressure. There are not really any creatures around to pressure decisions or a slow careful exploration.

The dungeon has two key issues that make it hard to recommend. They are both related to the actual writing. It’s long. Quite long. There is quite a bit of conversation DM advice integrated in to the text. In addition, there’s a lot of very specific descriptions about how the traps and effects are meant to work. The “spikes from the ceiling” trap gets over a column of text to describe it. Triggering it, the pressure plate, and multiple technical facts about the trap. There are not enough spikes to prevent passage. The spikes don’t go all the way to the walls. One person walking slowly won’t trigger it. The spikes don’t return to the roof as long as there is pressure. Except the description provided is MUCH longer than my summary. The writing is, in effect, ONE dm’s description of how they interpreted a ‘spikes from the ceiling’ trap. Rather than giving a few guidelines and letting the running DM handle the details the details are instead spelled out. This significantly lengthens the text and, I think, makes it harder for a DM to run it since they must dig through all of the text. I’m not saying that the text should be “Spikes come from the ceiling” and nothing more. I’m instead saying that it is the role of the designer to provide JUST enough detail to get the flavor of the trap across to the DM … who can then fill in the rest. This sort of thing is not isolated and happens a lot.

Secondly, the conversational style of the adventure leads to a weird organization style. The details of each room tend to be spread out over multiple paragraphs. What do you see when you enter the room? I don’t know, let me dig through the next five paragraphs and find out … It likes the effects were placed before the cause. In one room the treasure chest and mural on the wall, the fact that they exist, is placed after two paragraphs of text that detail how to dig through the coins in the chest and how the coins get in to the chest. Not ideal for finding information as you run the game.

It’s a slow adventure. You could hire a team of villagers and just dig the place out from the roof (it’s a barrow type place under a small hill) and get all of the secrets, avoid most of the traps, and PROFIT!