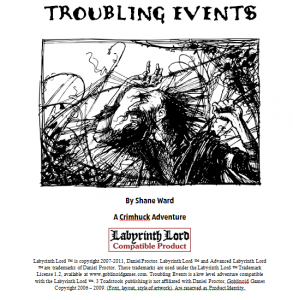 Set in the city of Yahleui, the heroes have only recently come to the continent of Crimhuck, seeking adventure. The heroes are met by a large comely woman in a tavern called the “Winding Trail”, her name is Hilde. She tells them that if they can safely get a magical ring to her employer deep in the sewers under the city they will be rewarded with precious gemstones.

This is a free 24 room dungeon crawl, ostensibly in the sewers. It’s above-average in the variety of encounter options and doesn’t drone on, keeping its text generally tight and focused. As a cohesive whole it fails to deliver. A good hard hitting second draft of this dungeon could pack & deliver like UPS trucks. As written, it’s a bit random and disconnected but with decent variety and a style that is not odious.

The designers notes (GOD how I LUV designer’s notes! I really do!) indicate the core of this was procedurally generated from some random tables. The designer then took the results and massaged things in to a story and more coherent dungeon. This is all true. Once told this you can see a bit of what must have come up on the tables and how it was then twisted in to a more coherent whole. I’m reviewing this primarily because of that methodology. This sort of “roll some dice to get some inspiration” thing is something I believe in and I wanted to review something that fell clearly, explicitly, in to that category. The designer has done a pretty good job of taking those dice rolls and turning them in to rooms. They’ve done a less great job of turning the entire thing in to a coherent whole.

There’s not much lead in, essentially it’s just what’s in the intro paragraph at the start of the review. The only additional details are that a guardsman overheard your conversation with the woman and that some thieves, who originally stole the ring and then in turn had it stolen from them, as are on the track. This is the wandering monster table. On a one the thieves track you down and on a two the guards track you down.

The map is a decent mix of loops, hallways with rooms off of them and hallways that run in to rooms. Certainly it has enough complexity to run a decent exploration game and provide that darkness and sense of the “black unknown” that influences a good exploration dungeon. It’s supposed to be an unused sewer, but doesn’t really resemble that at all and once you get past the room one entrance “along the riverbanks with no sewage flowing from it” then I don’t think “sewers” is ever mentioned again. Thank God. (But Wait! Don’t forget I’m a hypocrite!)

The encounters proper are ok. Not great and not terrible. There’s a sentence or two about the room, first impressions and the like, and then a couple of more sentences, set apart is a second paragraph in italics, that is DM/secret information. It’s a decent enough format. The “normal” text could be used as read-aloud, if you were pleased to do so. Maybe that was the intent since room dimensions are included at the end of each one. “The room is 15×15.” As read-aloud that’s ok, I guess, if you’re more interested in a fact-based approach (yuck!) than artistic license impressions (Yeah!) If it’s not meant to be read-aloud then it’s duplicative and should have been removed since that information is on the map. The descriptions proper are not terrible interesting. “Two human guards are asleep in chairs, an empty bottle of wine sits on the table” is pretty much the highpoint of the descriptive style in use. It’s not overly long (yeah!) but also not particularly good/interesting/evocative writing(Boo!) The DM text is similar. Straightforward, not laser-like focus but still ok. “ There is a magical trap in this room, when the door is opened and the PCs walk into the room it fills with black smoke. The smoke is harmless and is meant to keep the guards from eating too much.” That’s not a bad. Maybe a bit clumsy at the start, and maybe I’d choose different adjectives and adverbs, but with a little thought it’s pretty easy to see how it can be used to decent effect. Most of the rooms are like this; they have something beyond just a straightforward hack/combat, most generally towards the more mundane but still interesting side of the spectrum. Decent variety, some weirdness, a few traps, people to talk to sometimes.

The rooms, put together, is where things fall down. Individually they generally work ok. Put together as a whole they make less sense. The guy you’re delivering to is pretty close to the entrance. Some of his allies are scattered around in other rooms, but he hasn’t told them you’re coming and reaction checks determine their desire to kill you on the spot. (not to mention his reveal that it was all just a test … UG!) The rest of the dungeon is just THERE … not really working together in any way, not really related. I may hate sewer themes but saying it’s in a sewer and then having virtually NOTHING to do with a sewer is a bit of a let down also. Level theming can be great thing.

The entire thing needs a serious rework. Moving things around, bringing out the sewer theme more (or eliminating it) and making the rooms relate to each other more instead of just being, essentially, unconnected to each other.

I’d like to suggest that a mistake was made with this adventure. The background, and then the core conceit, is that this is a large old city and the ruler may be some kind of evil vampire lord. Combined with the decent map and keys, I think a significant opportunity has been lost. If level one was MORE of a sewer (I know! Heresy! Especially from Mr “I-Hate-Sewers” Lynch!) and there were MORE entrances from the surface and some entrances to lower levels then this could serve as the kicking off point for a megadungeon! Level after level underneath, each themed. Level one’s map would need some tweaking, and the keys need an overhaul, but they need to be put together better anyway, so not much loss there. The background with the city & vampire rules has potential. The map and keys show potential. There’s not may adventures that suggest there should be more, or even could lead to a megadungeon … even some megadungeons. I think this one does. But, not in it’s current form.

You can pick it up at the 3 Toadstools website.