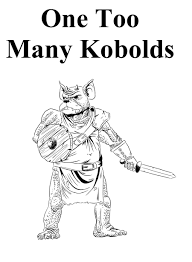 aka: One Too Many Kobolds

The player characters have been hired first by the town of Coventon to clear out a pesky Kobold nest that has been harassing the town.

This is an eight page ultra-minimal adventure with a one-page village, a one-page five room kobold lair and a one-page ten room goblin lair. The town and set up has some nice bits, but the lairs are WAY too minimal. Frankly, there’s not really enough content here to even do a review.

The intro is about half a page, single column, and is more of an outline or the adventure than an introduction. The mayor hires you. The kobolds retreat. A few days later a halfing hires the party to clean out the kobolds again, since they retreated to his land. But it’s a double-cross! The kobolds paid him to send the party to goblin caves! It’s suggested, as a follow up, that another group of kobolds then hires the party to give them advice about their own caves, since the party is such experts at cleaning out kobold/goblin caves and they don’t want to get caught in a bad situation by adventuring murder-hobos … and then further that maybe another party shows up while the party is in the caves giving advice! There are a few other details present in this section, like how many kobolds and goblins are present in the lairs. That’s important because …

WOW are the lairs minimally keyed. The map, monster stats, and keyed descriptions all fit on one page for the kobold lair and another page for the goblin lair. The descriptions are “2. The Kobolds main Room. The majority of the warriors are located here eating or training.” That’s pretty fucking minimal. No treasure listed. Not even monster counts. That’s all up to the DM. The shamen room has this gem It is decorated to venerate the god this band follows.” … nothing more.

The village fairs a little better, with a few more bits of detail to flesh things out. The halfling innkeeper has cheap rooms but pushes “upgrades” for everything & service. That’s something to run with. It makes him interesting and memorable with lots of opportunity for fun play emerging from it. Likewise, the mayor offers 30gp each, even though the merchants put together 50gp each. Mayors got to have a finders fee, right? It also provides one of the best explanations ever in an adventure on why/how someone is willing to go up in reward price.

There’s really just not enough here though. The core concepts are nice but the fleshing out of them is essentially non-existent.

It’s a buck a DriveThru.