The Devil in the Crypt 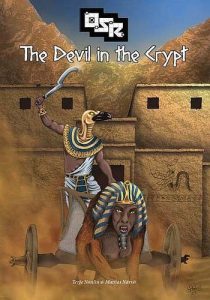 Death will come on swift wings to those who disturb the tomb of the Black Pharaoh! Haunted by evil both otherworldly and mundane, the tomb of the sorcerer-king Akhenseti lies waiting. Within its halls are secrets to be uncovered, enemies to be defeated, and weirdness to be encountered.

I’ve mangled the name of both the authors and publisher by leaving out the umlauts, etc. Sorry.

This is a deceptively interesting adventure in an old tomb complex. It has factions, some interesting entrance options, a symmetrical map (ug!) and a text/design style that runs right up against the line of being useful while still being terse. It may be, heaven help me, one of the better “egyptian themed” adventures. Those things almost always suck, but this one drops the historical pretense in favor of a more Indiana Jones style room theming. IE: it targets the rooms at actual play. Yeah!

The pretext here is pretty light. “Hey, man, there’s a tomb nearby that people think may have fab loot in it.” That’s supplemented by a few rumors and a about one (digest sized) column of background text. Among the rumored loot is both a devil-ring and an oracular device … both of which could serve as excellent pretexts for the party wanting to explore the tomb. Ain’t nothing like “we need to find an oracle to tell us how to destroy the hand of vecna” as the next step on a quest to get the party moving AND not entirely lead them by the nose. It’s a good pretext for an exploration dungeon.

The tomb has multiple entrances and this is one of the strongest elements of the map. I count seven encounters outside but right nearby the tomb as you try to get in and explore around it trying to find an entrance. I think the actual entrance count is four, with the front door and paths down both sides having entrances. (Ya gotta think of something like Valley of the Kings.) Once inside the tomb gets symmetrical, with the core being a 3×3 layout with a few side rooms here and there. I’m not particularly fond, in general, or symmetrical layouts. They tend to be boring and use boring themes. In this this case though something else is going on: factions and some classic room bits.

There are cultists in the temple (and a couple of wanderers on the table support them) doing their cultist thing … which ties back to one of the town rumors. There’s also a mummy in the tomb tasked with, along with his skeletons, protecting the tomb … and the cultists are pissing him off. The mummy is presented in roleplay format more than the cult is, but there are decent roleplay opportunities for both. This makes the various rooms a potential battleground, and could involve hints and missions. Great additions to the dungeon that turn it in to more than a hack and slash.

This is supported by some classic room elements. Statues that hypnotize you with their bejeweled gaze. Bronze gates. An obelisk and green cold flames. A scarab on the wall in gold that when pried off, as parties as want to do, releases scarabs from behind it. Rickety wooden bridges, cavernous rooms full of bats, and so on. A nice variety of classic elements to explore and encounter.

This is all communicated through a quite terse description style. That concentrates on concepts for the DM to expand upon. Room 2c is “A large bronze gate on the southern wall.” In general most of the rooms follow this format of one or two sentences, sometimes supported by some monster stats. “4c. Barricade – Nine skeletons trying to break through a door using a crocodile-headed statue as a battering ram.” It does a good job in giving each room a name and then just presenting a concept. I might have gone just one phrase or sentence further. While the descriptions do a decent job of presenting the core room concept I think that just a bit more on the IMPRESSIONS of the room would have been nice. Something to inspire the DM in their interactions. Dusty tomb with broken statuary, or some such, in the barricade example. Less facts and more creative license of impressions.

It’s taken a concept often done badly, egyptian tombs along with symmetrical maps, and made it pretty decent. By linking the outside exploration, the inside map, the factions, and the classic elements it’s made them all work together to present a surprisingly interesting little resource for DM’s. The descriptive areas are RIGHT at the line of being useful, with any less being a disaster. Decent interesting magic, mostly mundane monsters with a splash of the ultra-violence and fantastic from undead and devils … it’s running right at the edge. A little more color in tow, a little more colour in the rooms, maybe some multiple elevation stuff and this thing would be a 10.

You need to bring yourself to this, but I think it’s interesting enough to keep/want.

2 Responses to The Devil in the Crypt