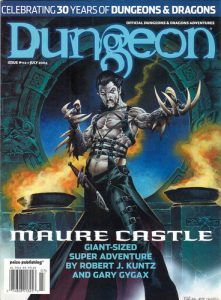 This is a 3.5 update of the old WG5 adventure module, with the original three level supplemented by a new fourth level. (And later, a few more levels, I think, appeared in Dungeon.) This new rewrite is essentially the same basic adventure as the original, with expanded text. The classic exploration dungeon suffers from this new presentation, adding a new set of warts on top of the old adventures existing ones. All is not lost though. The new text DOES add to the adventure, providing strong imagery and motivations that were not present in the original. Unfortunately, it does this ad-nauseum. For those interested, either photocopy this one and take a brutal approach with the highlighter, some homemade reference sheets, and extensive column notes. Or, Go buy the original (I think it’s available as PDF on classics? Print it out and then fill the columns with notes from the Dungeon Magazine version. The end result would be the best of both worlds: non-verbose with strong inspirational imagery. I wish I could do this without getting busted. 🙁

There are four levels here, each with a theme. Themes in these classic dungeons are good, they keep things fresh between levels and prevent everything from having that samey feel when you’re on room #206 of dungeon level five.

The expansion of text is non-trivial. Read-aloud has been “added” and in some cases the DM notes section has been expanded. In some cases new areas have been keyed. For example, the original level one has nineteen rcore rooms while the new level one has twenty-two rooms. This doesn’t tell the entire story since some areas have been consolidated and others newly keyed. In terms of raw page count the old adventure had five pages for level one (with some generous art inserted) while the new adventure has ten pages for level one with almost no art. But the old adventure was triple columns of small text and the new adventure is double column large text. In many cases the room text copies, word for word, from the old adventure; the first paragraph is the read aloud while the second is the DM text. So who the fuck knows.

Well, I do, because I read through the entire damn thing. It’s “longer”. It’s more confusing and harder to use at the table. The words run together, the larger text and double column layout are not conducive to finding and running the rooms. The additional text has a lot of “used to be” and other other descriptions of history and motivations of people long dead. NONE of this is relevant to running the adventure. It has no use when the characters enter the room. The content needs to be focused on supporting actual play, and a great deal of the content here does not do that. Further, there’s duplicative data presented. Wandering monster motivations show up in at least three different areas, essentially saying the same thing. What D&D needs, has always needed and will always need, are strong editors.

But … the added text also does a decent job in places. In particular the imagery in the read-aloud does a great job conveying some of “figure out the connections yourself” present in the original adventure. Because of the “text copying” and turning the first paragraph in to read aloud, much of the read-aloud is more fact/DM based. Dimensions and facts instead of impressions and feeling. But then we come upon this little gem: “The corridor spills out into a room so immense that your light merely reveals a fraction of its size. Perhaps a hundred feet away, what appears to be a chalice on a raised stone platform casts eeries green illumination upon what looks like a watery pool. The western wall is pock-marked with hundred of shallow niches.” A giant dark chamber with a glowing green chalice/pool in the middle and an entire wall of niches?!?!?! Sign me up! That’s new text for this area and it paints a striking picture of something that was always present in the room. It’s a great moment. Sure, the read-aloud could be better, but it’s much better than the fact-based “DM notes turned to read-aloud.”

It’s hard to say how many of the words are new and how many are direct copies … and therefore how that contributes to the confusing wall of text issues. I suspect it has more to do with the larger font and double-column layout.

There are decent wandering monsters on level one now, for example, with small motivations like “don’t get caught by the real guards” and so on. This makes them interesting and more fun to roleplay than generic wandering monsters that are doing nothing. I wish more adventures would do this. At the same time … it again gets lengthy. Or … SEEMS to get lengthy because of the formatting issues?

Comparing it so much to the original is worthless for those who don’t know it. It represents a pretty classic take on old school dungeons. And I mean that as a compliment, from a time before D&D became standardized. One of the early level one rooms has four doors, each with a lit candle and a fresco of a fighter on it. Putting out the candle means the fresco for that door jumps down and begins a fight. Hilarity ensues as the party is caught with their pants down … AND potentially uses this room as a weapon against foes encountered elsewhere. A classic “neutral” room to explore and play with. There’s a lot of this sort of thing in the dungeon. Original, and exploration based.

The text of the original was by no means terse. Multiple paragraphs, in some cases, would suggest I suspect that Kuntz was the primary author. The depth of the details would seem to indicate Kuntz as well … for better and worse. It’s very original, wordy, and full of details of dubious usability/need.

The first level text is closer to the original while the deeper levels seems to have more changes, expansions, read-aloud, and DM notes. The new level presented, The Statuary, seems a bit stabby stabby to me, with a lot of stuff to fight. The map continues the tradition of being interesting and is a true exploration map with lots of paths available, with all that enables. The hacky nature is sure to be enhanced by the 3.0/3.5 tradition of big HP and long fights.

This is thing absolutely WG5. It is BETTER than WG5 in some respects. It’s also worse because of the wall of text/formatting choices made (enforced?) by Dungeon Magazine.