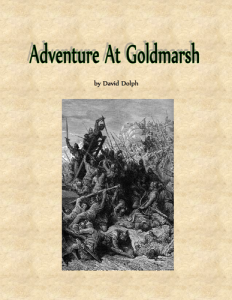 This is a plot based adventure in four acts. There is an investigation of a murder & kidnapping in a village, with strong social elements. There follows a scene-based overland journey and then a small linear dungeon crawl. Finally there is the big showdown, taking place in the middle of two armies clashing. The choice to run this as a plot-based adventure, with scenes and linear dungeon, detracts from the whole. It also suffers from some organization choices that were not good.

There’s no real hook or motivation to the adventure othan than Do Gooders. The sheriff is murdered and a baby stolen and it’s just kind of assumed that the party will do good. A little more pretext would have nice for immersion purposes. SOMETHING. The village description, included in this section, has both general rumors and rumors related the murder/kidnapping, depending on if the party is hanging around beforehand or questions folk as a part of the quest. The business description, the NPC description, the two types of rumors, and some general background of the NPC’s is all included in the “room description” for each business. Something here rubs me the wrong way. I like the NPC’s, and in particular how some of them have relationships with others in the village and they have some very human motivations for things that make them far more relatable to the party than the usual generic fantasy villagers. The entire adventure uses a single column layout, combined with a horrid “faux paper” background image. Either the combination of those two things, or the NPCs, business, and both types of rumors AND background data, combined, is turning me off on this section. The CONTENT is good. The choices on organization give me a headache when I’m trying to look through/read/run this section. This organization, and the lack of a pretext, are really the only things wrong in the village section, although the organization thing is a big deal for me.

The wilderness crawl, through a swamp, makes some interesting choices. It has three scenes that take place in the (abstracted) journey through the swamp. A six day journey. At the end of it they have a 12% chance of finding the ruins in question, with a +2% each day after that. So you wander around the swamp, having random encounters until you roll under your chance, and/or encounter one of the “timed” three encounters that occur on specific days. But the wander table only has ten entries, four of which are “gill men.” I’m not sure that’s enough variety to support the long-ish, dangerous journey. The dungeon is in the tower follows, which is really just a linear crawl with a couple of side rooms. There’s something about some magical traps resetting, so even though the killers have been through the dungeon our heroes still have to face some forced fights. Such is life in linear plot-land; linear dungeon is linear and combat forced upon thee. This section, along with the swamp, are both quite weak with little to nothing to recommend them.

The final section has the party going through a time gate to a big battle between two armies. The evil NPC’s the party have been chasing are trying to stab an old king with the sheriff’s sword, in order to make it magical again. The idea is that there’s a very big chaotic battle with both eh party and evil NPC party both separated from each other and themselves. Each turn you can find your buddies, go looking for the evil NPC’s, or try not get attacked by the battle going on around you. There are a few random encounters that can happen like “a group of 3 militia soldiers attack the PC’s”, so … the barest of encounters possible.

The adventure does a good job with new monsters, with both an undead and the gill people being nice new ones, and both getting JUST enough description to make them interesting and inspiring without being verbose. I wish the rest of the encounters had this more … evocative writing style.

Both the village and the battle have an author’s vision that you can recognize, even if they didn’t exactly execute the vision very well. The swamp and dungeon seem like tack ons without a solid vision to support them.