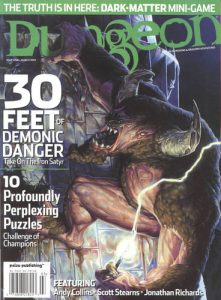 I have no fucking clue why this adventure exists. None. A small village has a giant statue in the middle. A local artist goes missing. One day the statue disappears, along with the head of the workmen and the local priestess. That’s it. That’s the adventure, from the parties point of view. WTF? There’s hardly any pretext at all for lifting a finger. The head of the workmen in the village is actually a disguised hobgoblin and the priestess a succubus, neither of whom give a shit about the village. The missing artists have been carving stuff in order open a portal to another plane so the hobgob can steal the statue and then animate it, on the other plane, for use in some planer war. …. And? …. Why does the party care again? The adventure gives some pretext to be in the village, but confuses that (being in the village) with a “hook.” There’s no actual motivation at all here. I guess there’s an investigation portion, if the party gives a shit, but the fruits of that investigation are worthless. “Bob wants the statue. …. Uh. Ok.” Added on top, the two villains use magical disguises, which is always a shitty thing to do in these things. And then the DM is given instruction to use fiat to let the hobgob escape from the party, on the prime plane, so he can steal the statue. He’s got ethereal jaunt AND invisibility. Uh … why, again? Oh, so you can go to the other plane and experience the linear combat shit-fest that the designer thinks is “adventure.” Monster zoo, with weirdly allied trolls and other creatures. No motivation. No goals beyond killing things and the barest pretext of “a missing guy.” I guess, the beginning is not linear? At least it’s got that going for it?

Challenge of Champions 5
By Johnathan M. Richards
Any Level

Episode 5 of the popular Champions series. The adventurers guild runs a contest, all weapons and spells are provided, which is how it gets its Any Level designation. This is essentially the same scenario as the other four, just with new encounters. Each is a little puzzly, meaning that there are obvious and non-obvious solutions that the adventure is written for. Go in the room, solve the encounter, go to the next room. I, personally, find the programmed solutions and artificial nature of these quite off putting … .but can’t deny that there’s a certain similar playstyle in “real” dungeons that appeal to me. “Hey, here’s a situation. Exploit it, ignore it, do what you will.”