Temple of the Ape God 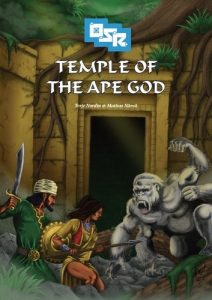 In the depth of jungle, a terrible and ancient foe has awakened.
There are rumors of gold to be won there, but it will take more than luck and a sharp sword to survive after daring the savage forces of the wilderness. The lost temple of the Ape God awaits!

This 21 page adventure describes a temple to an ape god in a jungle. It houses sixteen pages in a two column layout with Old Man Eyes font size. It has a decent mix of encounters on a somewhat simple map that FEELS right for the adventure. The writing quality is right on a knife’s edge, with the ideas presented being decent but need a little more umph to evoke the imagination.

The adventure is pretty simple. There’s a background, rumor table, a small wandering table for the area around the temple, and then the outdoor upper level of eight areas and the underground portion of eight areas. The outside area is small, with the major features being a giant ape state, a couple of one room buildings, and a hill full of degenerate apes. It reminds me, for all the world, of that scene in Around of the World in 80 days with the Kali temple. The idea that there’s this area you’re trying to get into, guarded by a lot of creatures hanging around, and you’ve got the entire area to exploit and come up with a goofy plan is one of the key elements of D&D. Since this probably involves kicking around the jungle a bit, there’s also a pretty decent jungle wandering monster table full of lotus traders, giant ants eating mules, a tiger crossing your path, and other encounters straight out of a stereotypical India … which is exactly what the fuck you want for something like this.

The encounter text, and the interior rooms, continue this theming. A dead adventurer impaled on a spear trap in a hallway is straight out of the first Indiana Jones, and no jungle temple would be complete without lotus flowers on a pond … and a buried monk in lotus position with writing on palm leaves, in this case. The concepts for these encounters are strong. The writing for them much less so. “The skeleton of a dead adventurer is impaled on a sprung spear trap.” Well, ok. Factually correct, terse, and a classic for a jungle temple, all of which are plusses. Pumping it up a bit, to install a stronger image in the DM’s imagination, without growing the description in a second or third sentence is the real challenge. A lot of writing in this adventure is similar; great ideas, terse, but lacking a bit of the evocative nature that would really push it over the top in to greatness.

The set up is pretty bare bones, as well. Other than a fact-based rumor table, there’s no real hook, starting location, overland travel, or any place else. That doesn’t have to be bad; I have a fondness in my heart for places that a DM can just drop in to a game to fit in to their own campaign.

This is a decent small adventure for drop in. It’s not a home run, but few things are, and it DOES bring a nice jungle flavor, but the DM will need to expand on it greatly.

Ps: I apologize. It takes 6 clicks in google docs to get extended character stats. No umlauts for you!]

1 Response to Temple of the Ape God