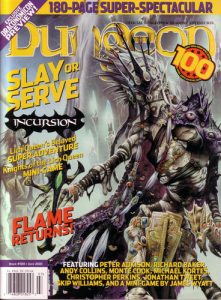 Ought oh. I think the blog comments are right: I’ve in for a very rough time ahead.

Two dungeons, barely connected. Number one has six rooms and is kobolds. The entrance is guarded by a kobold druid in monitor lizard form controlling two Huge shambling mounds on either side of the entrance, with five different terrain elements described with their impact on combat cover, stealth concealment, and movement rate. The rooms are each a little set piece. Dungeon two has five-ish is the dragon proper, and includes a half-red dragon giant crocodile. Again, each more of a set piece. We are in full on Combat As Sport mode in this adventure. Room, “interesting” combat, repeat. [Insert tirade about the death of D&D here.]

This has some heavy Forgotten Realms theming, but is easily ignored. It also has a scene based structure, but it’s not actually scene based. It starts with the party seeing a wagon crashing into town with runaway horses, and then two trolls pop out and start killing people. An investigation about the wagon and its cargo follows, with lots of resources … and lots of read-aloud. A significant portion of time is spent describing a drow attack on a lumber camp … that the party will almost certainly not be present for to participate in.

A fortress, open air and enclosed, on top of a humongous creature. The party is tasked with stopping it. It has some nice advice concerning getting on top, and a nice set of skirmishers at the bottom to keep the party on its toes. It’s a too combat focused, with most encounters being entering a room, killing whoever is there and then moving on. In addition the fortress, while having an interesting layout, is prone to one area spotting the party from a completely separate area. While some of this is noted in the text there is little to guide the DM, meaning you’ll have to photocopy the maps, read the text. And then mark up the maps with some sight lines, or least the areas that may have outdoor people. This is a nice concept but too lopsided with hacking and needs an order of battle.
The Lich-Queen’s Beloved
By Christopher Perkins
Level 18

High level 3e hack fests can be a bear, and this is not exception to that. You invade the Gith lich-queens palace and try to kill her. Some of the rooms have some decent imagery in them and it does, at times, FEEL like the palace of a lich-queen. Fleshy orb balls, the screams of tormented souls, weird ass organic (dead and otherwise) doors, lots and lots of creepy and and gruesome (for Dungeon) imagery. It also deals with the high-level magic issue in an interesting way. Teleport and paswall all you want! But the souls of the dead, embedded in the walls and constantly screaming and moaning, will take a high toll on you as you save vs insanity. Likewise, hack through a wall … but it regens at 10hp per round. This is a much better way to handle things than just saying “you can’t do it.” Give the party a choice. The queen spies upon you at all times .. but there’s no real organized reaction to the parties presence, which is a miss. It’s combat focused, with little to do besides hack things and trigger nasty traps that are put on weird objects around the palace. Still … nice imagery. You might look around for a PDF or a very inexpensive copy just to check out the zombie doors and flesh portal doors and mind-flayer orb ball and so on. It should inspire.