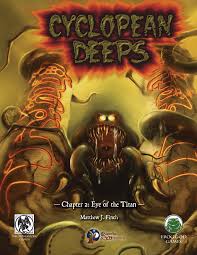 Eye of the Titan takes the adventurers to the strange, underground fortress of Ques Querax, where they may discover strange secrets if they are unlucky enough…

While on another Kon-Mari binge I came across a few things that I had forgotten about. No doubt because I have, once again, purchased the Pathfinder version. Because I am an idiot.

This is a wide spot on the road in the underdark hex map, a small fortress town ruled over by a giant floating eyeball. It is describing a single hex on the larger hex crawl map from the first in this series. It’s meant to be a home base for the party to strike out from as they explore the underdark further. As such it has the usual mix: a tax to get in, some guards, a couple of bars, a temple, a store, and The Boss.

The fortress is 200’ across, has some guards who demand 1/20th of your total possessions for entry. Inside the home base stuff is hit or miss. Every once in awhile Finch drops the bomb on you in a short sentence of A.W.E.S.O.M.E. Then he writes up something that has nothing going on at all. The human bar is pretty boring, and meant to be a safe place to base out of. A vrock can show up in the bar, but that’s about the extent of anything interesting going on. The Serpent-man bar doesn’t even have that. It gets four sentences, telling us it is the bar for serpent-folk over and over again, and then roughly a little more than a page in monster stats. The jeweler stands somewhere in the middle of interesting & not. His face has been torn off. That’s AWESOME and is a great example of of a small detail adding excitement. The rest of the three paragraphs though are a bit meandering in comparison. Shifting again, Alterations in Ownership is a store (the only one) run by a giant slug with four slaves. That’s pretty boss! And then the Temple of the Head of Terror has an empty room with a severed head in the middle of the floor and three weird priests who are always in the same position and turn to stare at you when you enter. Oh man, that’s great shit. That’s the kind of weird shit/mystery drop all in two sentences that a DM can build upon.

The misses, though seem more prevalent. The guard captains are nothing more than a name and a stat block. Any sort of fun & interesting stuff going on is pretty much limited to fetch quests. “Get me some more giant lizards.” or “Bring me some moss.” The interactivity between the various stores/buildings/personalities is virtually non-existent. When that’s combined with a lack of personality/interesting bits for the majority of the NPC’s and places, and the lack of, say, ongoing events or anything more than “what’s this weeks fetch quest” then the usefulness as a home base comes in to question. Or, rather, the usefulness of this as a DM Aid in a home base comes in to question. The giant slug running the store, the hints of the Leng Men, the head temple, the big boss, the faceless dwarf, the Vat Animal store … these are all great. It just needs a little more to bring the others up to that level and to add some interactivity to the NPC’s and locations in order to sustain the environment as a long term base.Just a little more of a shove.

Part of this is my own damn fault. I look at line after line of Pathfinder stats and wonder why, insead, a little more content couldn’t be there in its place. But, from looking things up, it looks like the Pathfinder version is six pages longer than the Swords & Wizardry version. Ouch! I wonder what my impressions would have been then?

This is available on DriveThru, as a part of a bundle.