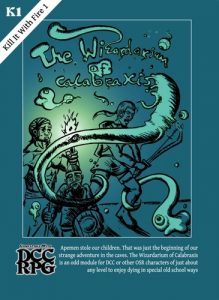 By Claytonian
Kill It With Fire
DCC
Level 1?

This is an eighteen page adventure in a dungeon/cave with history. The pretext is that apemen have stolen some children. The core of the adventure/keys takes place over two pages (!) describing 24 locations … although a decent number are just doors. This is, in essence, an adventure optimized to run out of a binder. Stonehell provided a one page map/key and then provided several pages of details to help support that key. Like Stone hell, this fits over two pages and then the rest of the pages support the keyed encounters. This could go on facing pages in a binder or on two pages of a traditional DM screen, with the supporting text then in front of the DM.

As with Lapis Observatory, this dungeon has history. An old mining site by ancient aliens, it was taken over by a wizard, and then seemingly abandoned with other folks moving in … like ape men. The style works well for most exploratory dungeon, providing additional flavor and theming, just as it does here. It allows a pretext to modify the monsters and to mix elements of several styles together.

The pretext for this adventure is Apemen kidnapping two children, one from an “elite” and one from a blacksmith. This is the extent of supporting information for the hook, except maybe a sentence about vampires stealing peoples heads, as local rumors of the old days of the evil wizard and a 12-entry table in the rear. This isn’t exactly the colorful locals that I prefer to hang my hat on. It’s trying to walk a fine line between focused support of the DM and minimalism. It doesn’t always succeed and this is one are. A little less in the way of filler text (pages 2 & 3, I’m looking at you!) and a couple of more colorful sentences about the local would have lifted the hook from “as good a 90% of what’s published” to “better than 90% of what’s published.

The rooms each have something interesting in them, generally something to play with and the stuff to play with is fun. Magic stained glass, heads you can talk to, a poop-slide, the 2001 obelisk and so forth, all supported by a map that, while not overly complex, is also not linear. The creatures and magic items are, this being DCC, all unique. The rooms are not difficult to figure out during play, meaning that there is not mountains of text to get in the way of quickly scanning the room and running it.

I would say it does lack two important elements that would really put the adventure over the top. First is the lack of room elements in creature rooms. This is mostly a DCC thing, and mostly because of the fighter actions thingy. Rooms with monsters, such as the first room, with apemen (yes, the first room resolves the hook pretext. Yeah!) need a little more to hang your hat on. The fights need something to work with if they are going to engage their creative fighting style juices. The adventure makes you work a bit for that. A human boy on the floor. “Primitive bedding & tools & crafts on the floor.” This is what the DM has to work with to give the players something to work with. I’m not necessarily making an argument for more text but I am making an argument, I think, for better text. Better text that provides a more dynamic environment for combat. Not a set-piece location but also not four empty walls. And while this is most obviously an issue for the DCC fighter crowd, I believe other systems also benefit from a more dynamic environment. Nothing is more boring than just rolling dice turn after turn as you try and stab each other.

The second issue would slightly related to the first: the descriptive style if quite fact based. It could use a bit of bussing up with some stronger imagery and evocative language. Here’s an example near the end of a room titled Circular Bedroom/lab:
“Door is ajar. Smells strongly of copper. Debris, scientific bric­a?­brac, a cot, and a fob­ watch­like thing litter the floor. Ceiling too high/dark to be seen by demihuman vision.”

Quite focused, I hope you would agree. The ceiling thing is a nice bit of imagery but the other parts are pretty utilitarian in their use of language. I’m not arguing, again, for more but rather I’m making a case for fewer facts and stronger imagery.

The adventure succeeds on two fronts. First, it supports the DM at the table, providing a format that makes it easy to run and yet with reference material handy. Second, it has that wonderful non-generic vibe in the creature’s, room goodies, and magic items that make DCC and OD&D in general the sort of non-generic fantasy environments that I think we’re paying for. If I can pull it out of the MM then why am I paying you? Not true here.

Oh, and one last note. To designers everywhere: Don’t be Claytonian, put a recommended adventure level on your product. 🙂