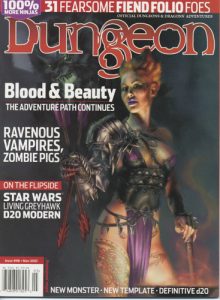 Side-trek! But man I don’t get this one. It’s supposed to be, I think, a sandboxy little thing in a small farming region. Instead you get one hook location (farmer Ted hiring you), one encounter location (where Ted takes you first), seven destroyed farms all abstracted into the same description, and one more destroyed farm COMPLETELY DISCONNECTED FROM EVERYTHING ELSE. Somehow you’re supposed to find your way there and then fight a couple of rasts (neato enemy!), an evil cleric, and a couple of zombies. The massive text bloat of earlier issues has been backed off of but now a new sin has appeared: the encounter build. A bunch of random monsters thrown together in the “controller, artillery, grunt” style with the barest pretext holding it together. This has always yanked my suspension of disbelief and, I think, shifted the ground too far toward “game” instead of “RPG” … whatever that means.

Side-Trek! A manticore and his lion buddies ambush the party in a narrow river valley. A dire lion appears first, that you can make friends with. That “hint” is done well, with the lion tentative and wounds, new & old, covering his body. That should be enough to get non-morons interested in something other than stabbing. Pretty simple, but ok for what it is. It should really be a part of a larger adventure and is, IMO, wasted on a throw-away side-trek.

This second installment continues the tradition of having two “dungeons” lightly connected through some plot. You’re contacted by a cleric, her boss is under attack outside of town, you go to rescue him, finding bandits and him dead (that’s dungeon one: a large inn.) Heading back to town you’re encouraged to find some missing wands that the boss was bringing back. If you don’t, the poor in town are doomed because of impending flooding. A brief investigation gets you the entrance to some ruins under the town (that’s dungeon two) and the main bandit hideout. You slaughter many Bothans and recover the wands. The core centers around yearly flooding, which has been light in recent decades, and the complacency of the town, concentrating on the festival instead of flood prep. One temple tries to hold things back by obtaining some wands of water control from another town, but are ambushed and the wands stolen.

The adventure is decent, for the most part, up to the second dungeon. The priest who contacts you (the hook) is inexperienced and the supporting text really conjures up an image of someone inexperienced and very worried and, I think, allows a DM to channel this into a nice NPC personality. There’s a good creepy roadside encounter with hordes of baboons just stopping what they do and staring at the party while they pass, which reminds me of creepy ass atmospheric shit from ONS1; “Beware Cho-odo!” The atmosphere continues back in town after the first dungeon, with rains, cheerful flood festival prep in the streets … which turns to despair as the rains keep coming and people slowly realize they are about to be fucked by flooding.

The first dungeon is a large road inn with two stories and a basement, a courtyard, and multiple stairs up. It does a nice job of painting a dynamic environment of open space, running battles, and a third dimension. The bandits inside are all drunk with that providing multiple opportunities for the DM to have fun with and the party to take advantage of. This, and the map, turn what could otherwise be a boring set of combats in to a fun little section … including a big bad that eats tongues and mocks a severed head. The little bits add a lot of character.

The section between the two dungeons is devoted mostly to trying to figure out who stole the wands and where they are. It’s laid out fairly well, if generically, over one page. One curiosity stands out: you can’t really interrogate any prisoners from the inn. Oh, you can, but they don’t know anything … even though their comrades are in the second dungeon. It seems strange to shut down this part of and punish, instead of rewarding, characters who took prisoners and played thoughtfully. Instead the location is revealed to the party by a generic scene-based encounter. This DIRECTLY CONTRADICTS the concept player agency, punishing agency in favor of a MEANINGLESS railroad encounter. Thankfully, this is the only sort of example of this bullshit.

The second dungeon tends more toward a long slog of encounters. Where the first dungeon was relatively tersely written this one expands the text, to no good purpose. Combats, traps, more combats, more raps, shit strung together … it feels like a generic exercise in encounter building. And for a base of operations, with a loud alarm, it has little to no guidelines on the bases/guard’s response to that alarm. Further, the encounters seem a little much for level 4’s … or 5’s … or 6’s. There are A LOT of LE 4/5/6 encounters down there, and you need to experience a lot of them in order to find the eight wands. I THOUGH this version was built around four encounters a day also? Idk, maybe I’m misremembering. It’s only an issue in that you must, generally, fight, and there’s a time limit.
It could use some more suggestions of scenes of desperation as the town floods (ala Deep Carbon) and fails in several obvious plotline areas. If the town is in danger why don’t the guard/other factions go in to the base also to find the wands? That would be cool; multiple factions and a lot of armed idiots swarming through the base looking for wands/looting, killing the enemy and each other. All Hail Discordia! But no real text is devoted to seeking help from the town, with “apathy” being the given reason at the beginning. Further, the cleric that hires you is “too busy” to help you with either dungeon, as are all of her minions. Finally, it has a wizard halfling following vecna and an undead gnoll priest in the base, a were-baboon, as well as an emphasis on created wands and a brown mold refrigeration device. These all tend toward a style of play I don’t really enjoy and add almost nothing to the adventure, particularly for the amount of silliness they introduce. It’s all pretty easily ignored though, and (ALL too brief) glimpses of Cauldron are tantalizing. A good adventure, if the second dungeon problem could be suffered through or fixed.