LG1 – Terror in the Forest of Gizzick 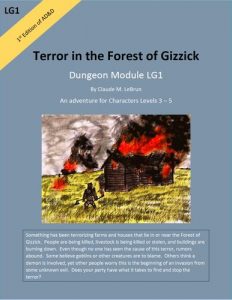 Something has been terrorizing farms and houses that lie in or near the Forest of Gizzick. People are being killed, livestock is being killed or stolen, and buildings are burning down. Even though no one has seen the cause of this terror, rumors abound. Some believe goblins or other creatures are to blame. Others think a demon is involved, yet other people worry this is the beginning of an invasion from some unknown evil. Does your party have what it takes to find and stop the terror?

This is a fifteen page linear cave/dungeon that describes a hobgoblin lair ruled over by a 9th level magic-user. It tends to the “minimal keying” side of the OSR. There’s something appealing to the soul about the hardcore old school monster HP’s and wizard, the likes of which I seldom see. Kind of like seeing one of those old meditating aesthetics that never has sex and subsists on one teaspoon of water a day in a cave on a cliff. Wow. Respect. This is one of those very basic adventures, similar in writing style and design to the lairs in B2, which, while not a throw-away, takes some on-the-fly DM work to run. Wow, I’m really dancing here, aren’t I? You can pick this up and run it. It’s more than the throw-away adventure dreck that clogs the RPG adventure pipeline. But it’s not too far above that line and really the saving grace is that it really IS an AD&D adventure. Hardcore. That doesn’t mean deadly. That means neutral.

It has about two pages before it launches into the keys. These two pages are really an abstracted hook, investigation, and travel to the caves. Maybe a quarter page, three paragraphs, to describe three generic hooks: kill evil, hired by the baron to stop raid, or someone’s friend/relative/village is killed. There’s not really much here to work, which is really the story of the adventure as a whole. Just as in B2, it’s a skeleton. I will note that the whole “dead relative/friend/village” thing is WAY overplayed and causes disruptive behaviour in players. No one ever has relatives or forms relationships because they know the DM is just gonna kill them off/capture them.

The investigation and journey to the lair are pretty generic and lightly covered also. Just a couple of notes about one survivor saying it was hobgoblins and a further hint: there’s a trail of fire going to the destroyed farm buildings. These are both important. Both details reward the players who look just a bit further. A token effort yields an advantage, both in learning the attackers are hobgoblins and that there is some kind of weird fire thing involved. I like foreshadowing, hinting, and rewarding the player that makes an effort. The search for the lair is just a flat 35% roll, or automatic for a druid/ranger/speak with animals and nothing really more than that. Again, pretty much the bare minimum.

The lair proper is only fourteen rooms. About half compose some caves that make up the hobgoblin lair/caves and the other half a little dungeon that make up the wizard’s lair Both sections are, essentially, linear. Or, maybe, “Linear with a trick, each.” The hobgoblin lair is a big room, but if alerted the males hide in some side chambers, ready to attack from behind. The wizard’s lair has a main path through it, with a “pass” that allows the party, or wizard, to avoid the most obvious path. These both turn what would otherwise be throw-away sections into something just a little bit more. Did the party use good tactics and “play the game right?” … because if they didn’t they are about to get their asses handed to them.

It’s pretty minimally keyed, with most of the text, where it exists, being devoted to tactics. This is not all that unusual: “6. NURSERY. 3 adult females, 4 young. hp; adults; 6, 4, 4, youth 2 hp each” The monster HP look rolled to me, and tend toward the low side because of that. It’s so refreshing to see a hobgoblin die when you stab the thing, instead of the combats being long slogs. It’s also going to be tough hitting the wizard. He lives behind a couple of traps, has a quasit to keep him informed, and has an ice storm, fireball, and lightning bolt at his disposal. Dropping on of those bad boys, closing a door, and running away is really going to give the party some heartache. Treasure seems light for AD&D, but there are some nice books on the lore of humanoids, demons, elementals, etc. That’s nice abstracted treasure and a way to give players hints and rewards for looking things up in the books.

This is too generic & vanilla for me. I’m having a hard time knocking it though because I recognize it as the type of thing that I’ve played in before and had a decent time … because of the DM. Te tools are here in this one but there is almost no hand holding at all. I like my text a little more evocative and slightly less abstracted.