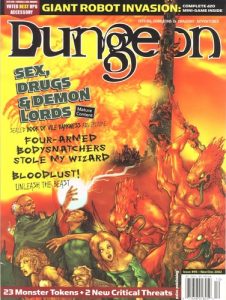 Fourteen mostly linear encounters in a wizards tower and caves in Gehenna. A wizards tower phases in & out of existance, which started right about the time four armed demons started aabducting townfolk. Really just an excuse to throw xill & a couple of devil-like folk at the party. LOTS of read-aloud … the second room has four paragrapghs of read-aloud, as do a few others. The adventure like to describe former uses and mundane thigns that are irrelevent to the adventure. A journal appears to relate the backstory, because someone, someone, somewhere once thought that was a good idea. It’s not. It’s an easy idea. Bits & pieces sometimes get good: an imp whispering to captive how much pain they’ll be in when the xill egg hatches, villagers who can’t believe the wizards disappearance had anything to do with the demon attacks. But it’s mostly just boring old combat. Here’s one of my favorite, useless, lines: “Total immesion in molten rock is potentially deadly, even for 9th level characters.” And then two more paragrapghs on magma. Or, how about “Ankle-deep Magma: 2d6/second+1d6 for 1d3 seconds after leaving.” Sorry, sorry, I should know better.

A workmanlike adventure, tracking down a mystery that leads to a lair that leads to a humanoid camp that culminates with an attack on the village. It’s not particularly imaginative but it’s not particularly loathsome either, being relatively terse by Dungeon standards.The adventure has a very generic feel to it, with not much village detail or even interesting things in the lair or camp. When it gets specific you get glimpses of interesting content. The village priest says he had a vision that if they built a temple then Kord would rid the woods of evil … which is kind of true since the party will rid the woods of the threat. There’s also a young lady, a dead trapper’s daughter, who is obsessed with finding/killing boars, since once killed her father. Both of these are presented with about the same level of detail as I just related … really just some facts. And both have this … potential to them that you can build upon if you glare hard and twist them a bit. The fervent young priest. The girl who emulates boars, dressing up like them, rooting around like them. They need just a little more to push them over the top and the rest of the encounters need this extra bit also … good things are few & far between in this. It does end with a mass attack on the village, which is a nice touch. Yet Another Journal shows up in this adventure, in order to explain the monster backstory. *sigh*

*sigh* Side-trek. A page of background for three charmed knights fighting with each other, and the party … all charmed by a Satyr.

There’s a boob in some artwork in this, which is why I guess it warranted the sealed nature of the adventure? Oh, no, it must be that the main location in this adventure is a brothel with many perversion rooms described, and “rape” being included in about half the NPC backstories. The main claim to fame in the brothel is that the yuan-ti running the place polymorph animals and monsters into human form and use them as their prostitutes. I don’t tend to be judgy of sex stuff, but I do tend to be judgy of crappy stuff, and just tossing in boobies, dildo’s, orgy rooms, and an orgy regisration form that asks for the applicant’s sexual history does seem a bit much. A wizard has sex with his imp all the time, a regenerating ogre is bound in a bar for all to torture … it’s all a bit simple and forced and prurient for the sake of being prurient, rather than an integral part of the adventure. Page long NPC/encounter descriptions don’t help much, nor does the fact that the brothel has a room dedicated to “Wand Storage” or the fact that when you free the raped polymorphed sex slave harpies … they attack you. There’s not really enough background information for the city to run it free form (although there IS a lot of text, a lot of it is not gameable.) and yet free form is how the place is supposed to be run, with sneaking around, almost like a caper or heist.