Tales of the Scarecrow 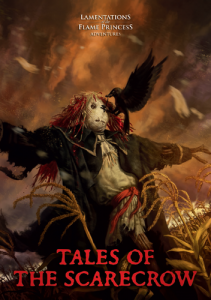 My first post-GenCon review, picked this up from the LotFP booth. It’s a small eight page volume that describes one brief setup for the characters to experience. It’s closest to Lamentations Adventure Number Ten, or maybe a side-trek in Dungeon Magazine. Adventure Number Ten, which I loathed, had about one idea a page. This has one idea, not quite as brutal as those found in Ten, expanded with more detail but still rather open-ended. It’s a sticky little thing, which deserves maybe one more page to it.

The setup is pretty simple. From the road you see a cornfield, lush and growing in an unseasonably way. There’s a path through it, and a farmhouse in the middle of the field. Thus the entire hook is one of those pot at the end of rainbow things: you see something weird and poke your noses in … Something a CHARACTER should never do but which a PLAYER should always make their character do.

Inside the house you find a barely living dude, a couple of dead dudes, and some things to tempt you in to making mistakes. Also, there’s a scarecrow in the field and the players get to be involved in how the scarecrow acts … a kind of push your luck mechanism where the most evil idea gets XP. That’s a cute META exercise. The goodies inside the house are tempting, and add a bit ,but they don’t really PUSH the players to the scarecrow. Essentially, once inside you learn you’ll have trouble leaving and the adventure is a kind of tension between leaving & facing the monsters or staying and being safe. Except … I don’t really think leaving is an issue? Essentially you have a 50 yard dash while you’re at ¼ movement, suffering one attack each round. The claustrophobia of being trapped is what’s intended to happen, I’d guess, but I’m not certain that’s what will happen. I guess that’s an actual play thing.

In any event, the writing is pretty sticky and you get the vibe in your head in eight pages. It could have used one page that served as a summary page for running the adventure. Maybe noting what’s what in one sentence for each thing. From that you should be able to run it with a glance or two at the other pages for one of the more complex items.

It’s an interesting little thing for what it is with, perhaps, a little weakness in the “being trapped in the house” front. The scarecrow mechanic can help a bit on this front, but, ultimately, the party is only trapped if they think they are.