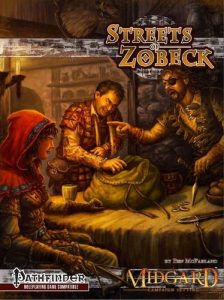 I own this because either I saw online it was a good adventure or I saw online that someone thought it was a good town supplement. Lies! Fucking Lies! The number of decent things in this book can be counted on one hand. Worth Stealing: Dragged Woman, “Adventure Ideas when you own a brothel” and the couple of things I mention below. Otherwise it’s generic, overly described mundanity. I’m pretty sure every single adventure has the hook “The PC”s have gained a reputation as …” From now on I BORROW this kind of shit from people when I want to review it.

Everyone Lies L1-3 – Ben McFarland
Garbage. Oh, it wants to be good, but some fuckwit thought a railroad was a good idea. The pretext is good: Someone steals the Maltese Falcon …errr, I mean a book. About five different factions are involved. Thieves, secret police, ghoul info brokers, corrupt guards … and one fuckwit thief and his in over her head girfriend. This is a DELICIOUS set up. That is then ruined by the ABSOLUTE RAILROAD that follows. I mean, we’re talking Eliminster Heel boy” railroad. You go from place to place encountering toughs who threaten you, tell you information to get you to the next location, and fight you if you don’t take their shit. And after they fight you they give you, anyway, the information they were going to give you. And you get healed. By them. By a third party, doesn’t matter. Heal. Look, I try to stay neutral in things. I know different people like different things. But FUCK PATHFINDER if this this is the way they write their shit? Also, “Masters of Small Matters” is a great name for a messenger company. Props for that little bit of specificity, of which there is too little in this adventure.

Rust L4-5 – Richard Pett
Well … it’s not a railroad. It’s also pretty straightforward. When it gets specific it’s good but that’s
far too infrequent. Mister Corpulent and Master Doldrum, two loathsome petty merchants, both independently contact the party, looking for them to untangle some murders … which are tied to a treasure they both want. The investigation is short & mostly abstract: either watch & follow a killer to its lair or look at a scene, find a sign, and go to a temple to figure out who once used it. I’m summarizing, but not by much … there may be about two more sentences about the temple/crime scene investigation. Most of the text concentrates on a slaughterhouse and a few things in it. The Corpulent/Doldrum setup thing is good, but that’s about it. The adventure lacks specifics. It deals with horrific crime scenes in the abstract. Doldrum refers to Corpulence misdeeds in the abstract, instead of the specific. It’s these lack of specifics, in the meeting, I the crime scenes, in the investigation, and in the workhouse, that leaves the adventure lacking. Understand, I’m not looking for mountains of read aloud. I’m not looking for railroad, or mountains of DM text. But SPECIFICITY is the soul of storytelling. Without it there is nothing to hang your hat on and you might as well have written “Clockwork machines in a slaughterhouse.” and claimed it was an adventure. And remember: Describing the mundane does nothing. There’s also the customary betrayal at the end of the adventure by whichever Merchant the party threw in with, with the other one showing up also. This is lame. Betrayals, a time honored trope, are completely misused in D&D and lead to the party never trusting anyone, ever.

The Fish and The Rose, L5 – Christina Stiles
This is nothing but a linear dungeon. The monsters do not break morale. They have no treasure. The only redeeming quality is a prisoner you pick up who you, presumably, have to drag with you the entire way. I seriously can’t think of a reason for this adventure to exist.

The First Lab, L7 – Mike Franke
Nothing but a little linear lair with almost nothing interesting going on. Find stolen diary, beat thieves to hidden lair. You catch up by meeting the dragged woman: lighting the bloody end of a rope and giving up a precious memory. That’s nice .. but then again she’s one the best things about the entire booklet, so, no duh. Otherwise it’s all “enter room. Fight. Enter Next room. Fight.” I try to avoid falling into Old Man-itis, but, Fuck, if this is mainstream adventure design then I Weep For The Future. Oh, and there’s a Rolle To Continue in the beginning. Joy.

Rebuilding a Good Man, L98, Matthew Stinson
Linear AND a mess?! This is it! Fight some thieves, steal a clockwork body, find the parts to transfer a soul into it. The son of a poor ferryman is CR10 because, of course, he has to be in order to make this POS adventure have a bad guy attack at the end.

Ripper, L10 – Mike Franke
A mob hanging a foreigner and the party stumbling in on it! What a great start! Of course, you can’t actually do anything. I mean, you can TRY, and roll some dice, but no matter how good you roll or what you do the guy still hangs. This is what passes for Player Agency, I guess. The guard shows up. A R4 and six F3’s. They threaten and bully your level 10 party in to looking into some killings, or things will go badly for you with the lynchings. How is this even a thing? You really couldn’t find ANY better approach for the corrupt captain than bullying a party two to three times his level? Generic investigation follows, and if you don’t make your DC 20 Gather Information check then it’s going to be an AWFULLY short adventure for you. Then a body drops out of the sky in front of you so you can have your required forced combat, followed by you arriving at the location that connects all the murders JUST in time to see it under attack. It’s got one thing going for it: it’s not those last three shitty ass adventures.

Flesh Fails L9-11, Christina Stiles
Easily one of the better adventures in this booklet, and deserving of analysis than the ranting the other earned. A noble disappears and you’re hired to find him. Along the way you get to impersonate him at a party, explore a BDSM club, visit the hallowed halls of of the magic college, and finally hit up a necromancer’s private workshop. The BDSM club is about as tasteful as you can want and still have a BDSM club, so no worries for the prudes in the audience. The party where the group impersonates the noble is more abstract than it should be. It’s really just a short paragraph and a timeline of (mundane) events. This really needed just a bit more to kick it up and provide an delightful evening of role-playing. There’s a section earlier in the book, in the generic town overview, which offers a page of ideas/seeds if the party run their own brothel. The party/impersonation section needs something like that. Just a half dozen or so bullet points for things to happen. Shit for the impersonator to roleplay through or for the rest of the party to deal with. Yeah, I can make it up. I can also not pay for this book and make up my own entire adventure. Its this kind of DM support that adventures need to provide, not explicit detail but nudges to the DMs imagination. The bookstore above the BDSM party is nice, and complete with store clerks who eavesdrop because they are bored; real life always provides the best motivations in an RPG. There’s another skill check to continue the adventure, DC 10 in this case, to find the entrance to the party. I’m sure there’s no problem for Level 10 party, which begs the question, why make it a skill check? The roll to continue the adventure checks are super lame and need to handled through a different mechanism. Something like just giving them the location and the skill check provides a boon or bane, rather than making the rest of the adventure contingent on making the check .. no matter how trivial. The magic college is abstracted and the DM told to make up traps and senties … again, that’s why I’m paying Paizo. SOmehow you’re supposed to figure out that the office at the college is not really being used and there’s another one, at the docks. The “not being used” is tenuous and “the docks” is not really discoverable that I can tell. Maybe I missed it, but I did read several times. The dockside necromancy workshop is quite nice, complete with pens of zombies and some crates full of preserved zombie parts, a head on a pedestal that talks to you and a nice new magic items “a bag of arms.” A tad more specificity with some of the idea seeds and this one could have been good.

14 Responses to Streets of Zobeck