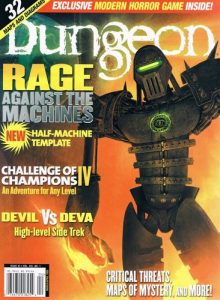 The fourth installment of the puzzle adventure series. The characters enter a tourney with no spells, items, etc, and everything is provided to them in each room, on scrolls, etc. They have to figure out the puzzle/win the fight to get out. Having just recently reviewed the Maze of the Blue Medusa, I’m struck by the similarity between the Champions series and the type of adventures i really enjoy, as exemplified by Maze. Both present some unique rooms which have a puzzle-like aspect to them. Bizarre things. I think this really gets to the heart of the nonlinear player-driven choices that, I think at least, drives old school play. Champions turns me off because of the forced nature of it. Not only the fact that it’s a tourney with all abilities taken away (forcing the PLAYERS to adventures instead of relying on their characters min/max’ing) but also because there’s generally a ‘correct’ solution presented for the room. Compared to Tower of the Stargazer, or Maze of the Blue Medusa, or the better Darkness Beneath levels, we can see the difference: the true old school adventures just throw your ass in and expect the players to use their characters to get past the room any which way they can with few if any assumptions. The popularity of this series, which gets a little close to the OSR style, stands in stark contrast to the linear crap-fests that plague D&D.

A side-trek. The party is literally caught in the middle of a street between a deva and a gelugon. Seven pages for one combat. A new low for Dungeon Magazine?

The road is washed out and before it can be repaired the bodies washing up from the old cemetary need to removed. The issue is the dead guy that shows up. Tracking him through the swamp reveals his wife “the swamp witch”, who’s a little nuts. Her husband was murdered and now he’s a bog mummy. Tracking him to the old ruined city gets some evidence which allows the party to confront some mercenaries on the cut off village. It’s an ok adventure, but overblown for what it is. A couple of giant centipedes, the bog mummy, and then the mercs. Not much going on. Some more village color (actually, less words and more color, the village portion is quite lengthy already) and some more swamp color (there’s a “friendly” lizard man out there already.) More color, less words. It’s trying, but not succeeding, in creating the flooded village, swamp, and ruined city.

Side-trek. Five pages for an air elemental trapped in a one-room hut. The only interesting thing is the entrails of the summoning wizard scattered around the walls of the hut. Next month, read the exciting twenty page adventure that has a giant rat in an empty room!

The Legend of Gathulga
By Tim Hitchcock
3e
Level 1

Nine pages for a giant boar and a couple of halflings. Lots of read-aloud and DM notes for rooms and locations irrelevant to the adventure! I seriously have no fucking clue what the magazine staff were thinking.

In my ignorance, I declare this to be the first 4e-style adventure in Dungeon. Linear. Full of bullshit flavor that is either irrelevant or justifies the unique monsters existence. Anyway, the monsters here all have a half-machine template attached to them. You find a wilman being attacked by them, save him, his shamen asks you, out of the kindness of your hearts, to save them all by killing the wizard creating them. You proceed through four or so more scene-based encounters/fights before hitting a mostly-linear seven room dungeon. One of the scenes has some read aloud that is something like “The magmin stop frolicking and dancing and their leaders says PLEASE GO KILL THE HYDRA AND WE WILL TELL YOU WHERE THE EVIL WIZARD IS.” There’s just not even a pretext to this shit. Lots and lots of words justifying shit, but little for the players. One of the combats/scenes is only a single column long, so at least it’s straight up about it just being combat. Oh, and, of course, the dungeon at the end has magic walls preventing all of the usual stuff. BULL. SHIT.