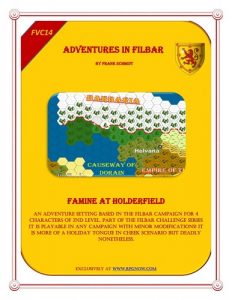 This tongue in cheek adventure brings new PCs into a small town after an adventure. Upon arrival they quickly discover that the small agricultural community has just been robbed of its harvest supply. With the seasonal change coming those supplies are necessary for the town’s survival. One of the victims of the attack was an alchemist. Contained within his bag were a few Potions of Growth. The bitter taste of the potion disagreed with the bandit who discovered it and he flung it into a field. Unfortunately for the PCs oversized fowl must be overcome before dealing with the bandits.

This is a short linear adventure with only five encounters, all combats, all in a row. It has some decent ideas, but executes the adventure poorly. It is really just something like notes you might jot down five minutes a game, and then each expanded to fill twelves pages … if you wrote linear combat adventures.

The idea here is that you stumble into an inn and upon a meeting of farmers. A traveller has been beaten unconscious and the farmers harvest has been stolen by five bandits. After they stare you down for a bit, they ask you to go get it back. The In Medias Res portion of coming in to a heated farmers meeting, the tenseness of you staring them down as they think you are bandits returning, and the badly eaten man on the table … this is all good and is the kind of “just a little bit more detail” that I’m usually looking for. It’s presented in a conversational and remote third-person style of voice that I don’t really get into: “Upon arrival the farmers will take a defensive stance against the party initially until they can be convinced they aren’t raiders.” Not exactly edge of your seat, but there’s enough to get the DM’s juices flowing, even if it does take most of a page (single column, big text) to get there.

Leaving the tavern to track down the bandits the party then faces three encounters in a row with giants chicks/hens/turkeys. The pacing here is WAY off. One encounter with giant chicks is great. It made me sit up and say “Hey, great! Cool! New monsters!” And then the next one . And the next one. And the next one. All linear. One after another. And switching up from Giant chicks, to a giant hen and chicks, and then more giant hens and chicks, and then a giant turkey is NOT providing variety. It’s a boring combat grind. Followed by a boring bandit combat grind.

The adventure tries to have some fun, in a way. There’s a wanted poster provided as well as a nice size comparison chart comparing the giant fowl to human sizes. Both of these are nice touches to help the DM and communicate flavor. And then it goes and ruins it with some REALLY bad choices. The one that immediately comes to mind is a “roll to continue the adventure” check. Someone needs to make a DC12 check in order to track the bandits back to their lair. I don’t have a problem with the party failing an adventure. I do have a problem with that failure being on account of a tracking roll. If they piss an obviously needed NPC off, then great, they fail. Die in combat? Great, they fail. Miss a bullshit no reason for it to exist DC 12 check? Nope. Uncool.

It also makes the chickens shrink again. This is un-fun. The chicks have grown because of a growth potion they drank. It makes sense they would shrink again, after 12 hours. It’s also lame. Walking around with giant chicken armor, having a giant turkey drumstick, a giant turkey wishbone, giant feathers … the amount of fun is ENDLESS. But the recommendation is to not have it. To take it away. The bonus the characters would get is trivial but the fun the players would have is massive, so the decision doesn’t make sense to me. Another example of realism getting in the way of fun in an elf game.

The cover is reminiscent of an OSR adventure, all hex-crawly and the like. Inside is as linear a 4e adventure as was ever written. Me has sads.

4 Responses to Famine at Holderfield