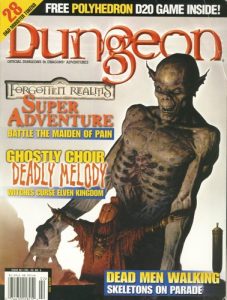 Oh, to mourn for what could have been. The party is trying to find a bandit in some woods and stumbles upon some cursed elves … who they COULD choose to free. This adventure has a lot going for it, and a lot going against it. It feels VERY padded … that all of the good parts were expanded upon with useless drivel. It’s got some decent rumors in town. You see, the adventure starts a bit forward. The party is looking for a bandit and makes it to a town the bandit was seen near. This entire beginning is abstracted and not really dealt with, which is GREAT. An ok hook, abstracted and essentially ignored by the text, with the first real parts of the adventure being the first part the party has a choice in: the town. The rumors are all in first person format, with folksy stories and so on, to add to that “Detail makes the Story” thing I like to harp about. A lot of the good information is presented in bullet form and the read-aloud. In fact, as an experiment, I might photocopy the pages and cut those out and see how the adventure travels. It would be A LOT shorter and I suspect loose nothing. In practice, this makes it easy to dig through the crap and find the bits you need. The bandits are all just pretext to get the party in to a haunted wood and have them meet some cursed ghost elves who plead for help. It’s done VERY well. You find the bandit leader, in a kind of anti-climactic (but perfect for the adventure) way, trapped in quicksand, led there by a will o the wisp. His mean are nearby, slaughtered. The party watch them rise as shadows. This last part is handled in, I think, two sentences, and is rife with the kind of great imagery that I’m looking for. “As the PC’s search the bodies of the dead bandits darken and fade away. Soon there’s nothing human left of them, as the corpses dissolve in to a sickly black mist.” These two sentences, combined with a previous description of the horror on the bodies, provides great imagery for the DM. It’s got a lot going for it, from an abstracted pointcrawl style to helping encounters to get the party on track if lost. It’s got some great cursed hags also. On the downside, there IS a lot of text. This is so common for Dungeon it’s almost unfair to hold it against it. The cursed elf ghosts are well done, but the entire middle portion, with them, feels more like an interlude in a movie, with lots of exposition. I’m not sure how to fix it. The… sadness? Of the ghosts needs to be conveyed, but the entire section is WAY too long for what it is: some flavor text to set mood. The hag caves (three beautiful elf maidens …) are essentially all crap. Just room after room stuffed with silly monsters. A hill giant here, crocs there, a water elemental. In fact, I’m getting to the point where seeing an elemental in an adventure means the designer didn’t try very hard. As with “animated objects”, they COULD be awesome … but are generally a crutch for weak design. Anyway, while the hags prepr are nice, the environment they are in does not jive with the hag encounter. They feel disconnected, their minions and the hags proper. The ghost/hag portion is optional and the adventure is laid out much like, I suspect, many games were at home in the 3e era: here’s some highlights jotted down on a notepad. It’s not exactly linear, or a railroad … or, maybe, it IS both of those things, but without the negative connotations they have come to mean. The players can still opt out and it’s not a straight A to B to C thing, but they are clearly connected in that way and WILL be experienced in that way. It’s more like the major areas are connected, linearly, but you have choices on what you do and where you go. Anyway, not exactly my style, but it’s got a decent human element to it and a decent ghostly element and a decent mythic element with the elf maiden hags. This is another one worth ripping off and/or fixing. Also: nice art!

This has a nice concept, and beginning, and then fails to continue to deliver. Rumors are heard of a cursed village. Investigating finds a village populated by skeletons, going about their daily lives. This leads to a wizard’s keep and then to a keep in which a princess is a soon to be wife of a Wraith King. The start is pretty nicely done, with rumors of a cursed village, encounters on the road with notable notables, and then finally the eerie village people. It’s all got a very strong folklore feel to it, a kind of quiet horror forest vibe. Then it becomes boring. Some clues can lead to a wizard keep and some boons inside, but the wizard’s keep is boring. It’s described boring and has little of interest in it. The keep of the wraith king follows in the same vein: boringly described and boring encounters. At one point you meet the last living people in the village … who have nothing to tell you. No doubt the party will focus on them as a source of protection, but there’s nothing there. “Help us escape” is fine, but why they survived so long is a problem. So, steal the beginning, up to and including the cursed town, and drop it in to something more interesting.

A fifteen room flooded cave with a water naga in it. The focus here is on the party really feeling out of their element, and the element being on the side of the monster. Go in to a new area, the naga fucks with you, you deal with it by maybe burning some resources/spells, and then go to the next area. “The monster, in its native environment, taking advantage of its abilities” isn’t such a bad idea and it’s certainly a lot better than those old three room lairs that used to appear in supplements and adventures, to this day. It’s a little Hit & Run/Ambushy, as presented, and a few more words against DM Fiat may have been in order. It’s hard to call it good, since it’s essentially 15 hit & run attacks against the party, but it serves the purpose it was written for, without too much extra bullshit.

Nope. Stupid fucking lame adventure, poorly organized. Ok, MOSTLY stupid. Arrive in village, the people distrust you, see a funeral, get sent by cleric to where the paladin died to look in to bandits/etc, run around a swamp valley for a bit, a ghost sends you back to town hinting the cleric is evil, other people in town hint cleric is evil, discover evil catacombs, confront cleric.

The main hook here is interesting: escorting a bridal party (with the implied fun of that) and ending up in an innocuous location: Twilight Hollow. That’s not so bad of an idea to get the party someplace “normal” for an adventure. There’s lots of little weird encounters to illustrate their distrustful stance, but little to actually bring the village to life beyond that. IE: the events presume you hanging around but there nothing there to hang around fo. Eventually you get sent on a quest to a valley to figure out what killed a paladin, and do it because you are good people, I guess. The swamp valley is done well, but the entire thing is pointless. The actual instruction to the DM are something like “when they have wasted enough time in the valley, have them encounter the ghost that points them back to the town.” Uncool. Likewise, in town you THEN have some encounters that lead you to catacombs under the village, but NOT before you go to the valley! That’s the worse kind of railroading. I get what they are trying to do, but it’s carried out VERY poorly. The catacombs under the town house about a zillion evil cultists, all unknown to the village. The concept of the catacombs, and their separate areas is a good one, if inconsistently carried out. In particular the locations and evil-NPC’s have mountains of backstory that won’t come up in play. Also, the cleric wears a ring of mind shielding and the words “ethereal xill cleric of loviatar” are written in the adventure. Yeah, things get shitty at the end. The feeling of fear and paranoia and Who Can You Trust never really comes through. It’s just a hack a thon.