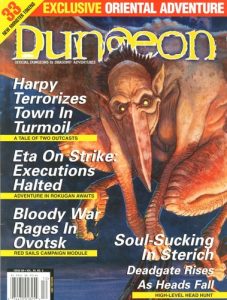 A seven scene linear adventure that pits level 1 characters against a were-tiger. This has some pretext about honor, but that doesn’t really come in to it. The first few scenes involve the Eta, the lowest caste, and the systemic prejudice against them. That seems like something fun to game right? Next issue has orc babies and an adventure involving the trans-atlantic slave trade! Oh Boy! Anyway, seven encounters, and maybe three combats, the last with a were-tiger.Hope your level-1’s all have silver! Perhaps the only good thing about this adventure is that the Eta village, maybe the third encounter, is the turning point where the adventure moves from reality to fantasy. After the village the encounters are all myth: tengu, were-tiger, goblins. That’s a good transition to The Mythic Underworld. The adventure also does a good job in making clear the miserable treatment of the Eta and the hyperbolic class-based system in OA. Fun!

Dark Age Russia! Cool!
Wait, I meant to say “Event based Adventure! LAME!”
Just a railroad, with maybe two interesting encounters in it. “Defend” a village from horseman raiders. Defend the village from other Rus. Have a couple of encounters on the river. Visit a town where the Rus dude who attacked the village is selling them as slaves, and challenge him to combat. Maybe eight or nine encounters, all in a line, with far too much boring combat. When your adventure has the line “To keep player suspense alive, roll some dice to make it seem like they are having an effect on the battle” then you know you are a failure as an adventure writer. If the party doesn’t capture a boat, during the raid, then a villager offers them a boat. *sigh* So the parties actions have no effect. There is a nice talky ogre that will chat with you and not be a jerk, and even maybe be helpful, if you pay the toll. That’s refreshing. There’s also a hag/witch with a bridge of bones. Given my over of folklore in adventures it should be obvious I like that. The rest of the adventure is just boring and dull combats. With overwrought read-aloud. Joy.

Fifteen rooms in a derro undead/simulacra fortress. There’s this theory that says that deathtraps are ok in a high level adventure. The idea being that the party has access to a lot of magic, divination, and maybe even wishes and if they don’t take advantage of all their capabilities then Fuck Them. I won’t take a position on that, but I will note that this adventure relies heavily on the party using their abilities in … non-modern ways. They are going to need to scry/commune/etc just to find the adventure and even then it’s 26 days away walking .. by which time the evil plan will have been enacted. Better have divined that and/or used fly/mount/etc! So, expert players only. Once inside it’s full of boring combats in a mostly linear, and small dungeon. Undead. Simulacra of monsters. Lots of nonsense text telling backgrounds and motivations useless to the adventure. The final encounter, in particular, will be quite rough, unless you have expert players who can think non traditionally. Then Orcus shows up and steals a major magic item, his scythe. LAME! I don’t find the adventure interesting, because of its linear nature and focus on combat, except for the expert-player orientation of it.

Enkidu-like barbarian is cursed with manners and the party needs to kill a troll priestess to free him. The barbarian with manners is a nice NPC, but the troll lair is only three rooms of mundane adventuring. IE: this is a five-page side-trek. Also, FYI: I have a brand on my left arm, in cuneiform, of Gilgamesh. Fuck you Doom of Man!

This weird thing is almost like it was written to be the Included Beginning Adventure in a boxed set. It’s very “You could do this or you could do this and if the party does this then you could do this.” in the same way that many introductory adventures are written. But it’s level four? It’s primarily a social adventure, with only one real or maybe two real combats. It’s also one of the worst fucking adventures I’ve ever seen. I loathe almost every choice Tweet made in this adventure. I usually try and keep ideas and actions separate from people. What you say or what you do may be stupid, but that doesn’t mean that you are stupid. Generalizations are evil. But I’m also a hypocrite. If this adventure is any indication of Tweet’s DM’ing style then I’m willing to say he’s fucking shitty ass DM.

The party visits a town for a wedding. Someone is missing. Out of the kindness of their hearts the party goes looking and fights a harpy in a tree. The end. Oh, on the way to the town the party is attacked by gnolls that the designers fully admits are not really connected in any way to the adventure and only exists to have a fight at the start. Wonderful. Upon reaching the town the party eats shit. Seriously, they eat shit. Over and over again. A hobgoblin guard shows up at the gates and belittles the party and makes petty (and not so petty) demands of them. Give me your weapons. It’s all a test, to see what kind of people they are. I’ll tell you what kind of people _I_ am, the kind that doesn’t take shit from police state thugs. *stab stab stab* Police state? Oh my yes. You see, one of the dock workers (it’s a lake town) is a third level paladin and uses detect evil on the party, in order to inform the sheriff. There’s a couple of encounters like this, including the little thief. A thief breaks in to the partes rooms at night. If the party hurts them, or god forbid kills them, then the sheriff probably kicks them out of town and the DM is encouraged to force an alignment check. Oh, and sick an elven strike force on the party. Even if it’s accidental, like a shot fired in the dark. The townsfolk generally treat the party like crap and then expect them to help find the missing person.

I’m not sure what Tweet is going for here. Pushing the party, repeatedly, and then punishing them for the action you’ve encouraged is Not Cool. In RPG’s the big red button exists to be pushed, because that’s the fun thing to do. The enforced morality in this adventure, the DM pushing the party over and over again …. This is not the way to DM your game … unless you are in junior high. It’s this kind of shitty ass crap that gives D&D a bad name and it’s this kind of shitty ass adventure publishing that encourages people to be shitty-ass DM’s. “The due that write the game write the adventure and he clearly wants me to be a strict dick to the party.”

The adventure does have a brief NPC synopsis in the rear, but they have no personality. It has suggestions on wedding prep, but no complications to have fun with. It has a nice scene where the town folk to come to the party with petty requests, in a kind of hero worship/celebrity sort of thing … that’s not really taken advantage of at all.

Beyond this, it’s long for no reason. A page and a half for a gnoll ambush? It gets back to his Introductory Adventure advice and conversational style that the adventure has. It’s also organized in a weird way. In particular, the Harpy stats and tree she lives in is at one part of the adventure, in the locales portion, and how the harpy reacts and what she does, etc when the party shows up is at the rear of the adventure MANY pages away.