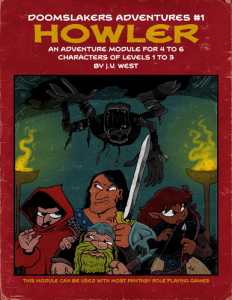 The wind whips through the standing stones making the hill moan like something alive. Or perhaps something dead. You stand atop its barren crown. There is a whisper in the darkness. There is evil afoot…Whether you come to the hill for glory, riches, or by mere chance you might not walk away the same as when you came…if at all

This is a small six room tomb complex, with a seventh encounter outside. Inside are mostly spiders and and the big bad while outside is an aggressive wandering monster table. Those seven encounters take twenty-two pages to describe, so there’s clearly an issue with tercity in this product. It DOES do a decent job from time to time, a more old school flavor than most OGL stuff did, anyway. The primary drawback is the shortness, the verbosity, and the lack of treasure. (I thought I bought a OSRIC version but it’s clearly OGL. I don’t know, I probably fucked up.)

The adventure has at least one redeeming quality: it takes liberty with the rules. Wolves with cumulative fear effects. Spiders with new poison. Weird curses. It has no problem providing a new rule/ruling in order to handle an effect that is either outside of the rules or doesn’t use the rules for a crutch. Many adventures will try and explain everything through the existing rules. I’ve lost track of the number of times I’ve seen a monster released from a stasis field that is triggered by a contingency spell attached to a magic mouth spell. While I loathe statis field monsters, the whole “need to use the rules” things infuriates me more. Just make up a rule and move on with your life. This adventure does that and it’s refreshing to see. It also takes a paragraph where one sentence would do, and two paragraphs where two sentences would do, to explain the rule, but, well, let’s talk about that a bit.

I’m going to pick on this poor product to make a point that would probably be better illustrated in another, even more verbose, product. Sorry.

The text here is verbose. Very long. To little effect. Seven encounters over 22 pages is excessive. If we ignore all of the fluff, background, stats, etc, then we’re still looking at an average of almost one pager per encounter. Still too long. I need to make sure I’m clear here: I’m not complaining for the sake of complaining. I’m not looking for the ultra-tersity of Palace of the Vampire Queen. Those sorts of products have little place today. Nor am I looking to have everything explained to me. I’m looking for something on a different axis altogether: is this useful for the DM running the game? And even more hard-core: At the table?

In adventures, I assert that’s the definition of Well Written. Does it help the DM run it? At the table? Some abstract linkage, or friend of a friend idea doesn’t count. You can’t provide a six page backstory and assert that it’s useful to the DM because they might get an idea. I’m sure they might. But the primary purpose of the adventure is not as a bit of fluff to inspire. Sure, some folks might use it that way. I might use it to wipe my ass, but no matter how good it is as toilet paper that doesn’t reflect how good it is at helping the dm AT THE TABLE.

In this light you can start to see common themes in what I complain about. I like monster reference sheets because the DM can use them as reference at the table. I like a dense and overloaded map legend because it also acts as kind of reference at the table. (I’m not referring to the map complexity, but rather showing other information than room proximity on a map.) I like evocative writing because it can communicate a lot of information in a very small amount of space, leveraging the DM’s imagination through inspiration. And why is it important that it be terse? Because the DM needs to use the fucking thing AT THE TABLE. The party advances to room six. You look down at the book, at room six. You see eight paragraphs of information. How do you scan that and provide a fun experience for the players? You clearly can’t. We resort to highlighters, or taking notes, or annotating the maps, all to pull out the key information that the DM needs to know at a glance.

It is, however, trying to communicate some interesting things. I already noted that it tries new effects out, which is great. Magic items get a “better than dull book” description, like a gold ring with a sapphire, and mundane items like an emerald encrusted silver dagger. (even though the treasure seems light for an gold=xp game, but, again, I think I’m looking at the OGL version not the OSRIC version.In my experience, the designers never update the treasure, but maybe I’m wrong this time …) A small ruling on the effects of sneezing on monster ambushing. A room of magic mushrooms that you can take with you. Foreshadowing the main monster through stuff the party finds is a great way to build tension, and it’s done here. The read-aloud mentioned scurrying creatures in the rooms with giants spiders.

There is a GREAT section on an NPC you find the dungeon. He’s wounded. If you save him, he’s still a bit delusional and he’s paralyzed from the waist down. One of his potential lines is “I … I have soiled myself and I’m sorry for the many things I did in life …” Great! Well, the exact wording could be better, but it gets the core idea across really well for that particular rant. The party might even get a hint off of him that a monster is about to attack, if they notice his suddenly maddening eyes.

This has something to say, it just has a hard time getting it across. A second giant spider attack is hidden in the body text, and unbolded, unlike all other monsters. It takes over a page to describe skeletons attacking when you dig up a grave. Yeah, there’s a curse and some foreshadowing, but, still, over a page?

Pay What You Want @ DriveThru.