Through the Cotillion of Hours 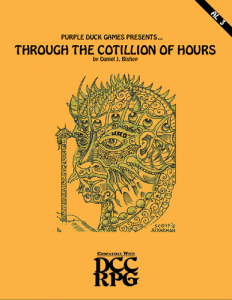 In this adventure, sleeping characters are invited to the Cotillion of Somnos, the Dreaming God. If they can make their way past the entertainments at the Masked Ball, they can petition the Dreaming God to fulfill some request on their behalf.

This is an adventure in the house of the god of dreams that mostly involves making savings throws … on a mostly symmetrical fourteen room map. I don’t like dream adventures, or symmetrical maps, so be warned. Weirdly, I don’t like this one either.

The idea is that this is a drop-in adventure. When the party needs something, or goes looking for something then you can drop in this adventure. The official DCC line did something like this in … Blades Against Death? In that one you could drop it in when the party needed to bring someone back to life. In this one it’s just ‘Something.’ Need a question answered, a life restored, or some other boon? You can drop in the house of the god of dreams! In principal I really like this kind of idea. It slots in to an idea that you can cobble together something from a published adventure to fit in to your own campaign. Need an oracle? Ding! Need a village for your plot? Ding! This is a kind of “supplement as a play aid building block” kind of adventure design rather than “supplement comes bundled with plot.” Generically, I think the concept is good. And then there’s the implementation in THIS adventure …

The entire adventure is timed. There’s a kind of clock counting off time and after it chimes thirteen times the characters wake up. When you go in to a new room the chimes ring.

Boom, you’re in the dream realm, in front of the god of dreams home, where a grand masked ball is taking place. You wander around from room to room until you find the god of dreams. In each room you find something that you need to fuck with in order to do something. That something is usually “leave the room.” Make a DC14 will save. Make six DC 10 agility checks. Blah blah blah blah. Sometimes when you miss a save it causes the chimes to go off because you’re delayed, etc. There are a couple of ways to Turn Back Time, none of which involve aircraft carriers or fishnet, sadly. Make some saves, maybe pay attention to puzzle-like element. Go to Next Room.

As an example, there’s a room with “Fear Nothing” or some such over the door. Inside the room melts in to a giant maw of your enemy and you begin to get sucked in. Letting yourself get sucked in advances you (Fear Nothing, remember) and there are vines that multiply faster than you can kill them, etc. That’s the kind of encounter you can expect.

Is that your thing? It’s not my thing. I’m not heavy in to combat (and, to be fair, this adventure really only has a couple of POSSIBLE combats in it, and then only if the party provoke, hence it’s all levels designation.) but I’ve got this problem with one note adventures. Make saves in rooms. Figure out puzzles. These things become boring after awhile. There’s little for the players to do with their characters. Making a save, especially multiple saves, is not exciting. It’s not the player directing their character. It’s just rolling dice, without even the tension of combat.

There’s also a decent chance the party will become separated. The adventure even notes that. That’s boring. With no hint of hyperbole, I don’t think ANYONE has EVER had ANY fun being separated and sitting there, bored, waiting for someone else to finish their turn so they get one step closer to being able to do something. Beyond physical separation, there are several times when someone could be permanently taken out of the adventure, usually by doing what they are asked to do. I one room, you ask an oracle a question. If you actually do so then you get the asnwer, but then your sucke dout of the dream world and your adventure is over. The oracle endgame portion isn’t bad but it’s the player elimination that is. I’ve got no problems with this in a boardgame but in an RPG? Lame. SImilarly, if you make the wrong kind of request to the dreaming god then you die. At some meta level this makes sense, Gods Take No Shit. But the players can’t make a meaningful decision unless they know the consequences, and just tossing DOOM at the them, almost at random, is not cool.

It was the usual problems with descriptions. A couple of paragraphs of read aloud per room are provided, but the text is generic. Rooms are “Opulent.” This is a textbook example of Telling instead of Showing. The designer has told us the room is Opulent. He should have described the room in such a way that WE make the determination that it’s opulent.

1 Response to Through the Cotillion of Hours