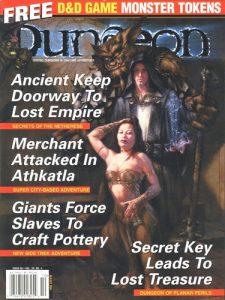 The Door from Everywhere
By Roger E. Moore
3e
Level 6

A ruin with some doors that can teleport you to nine different locations/encounters throughout the forgotten realms, as well as a Zent jerk that shows up to fuck with the party while they “explore” the doors. Six pages of fucking background, read-aloud, and nonsense. Oh, for the glory days of Dungeon … and then a full page on the historical context of the ruins! A page and a half for a couple of orcs guarding a door! Page after page after page of meaningless descriptions and how things work and historical context. This is probably the stupidest fucking adventure I’ve ever seen in Dungeon. Teleport to a new area and have an encounter! This monstrosity takes 25 pages to describe ten encounters. Moore should be ashamed of writing it and Perkins should be ashamed of letting it through.

This is a decent investigation and then assault, in a city. Run around chasing clues from place to place to discover a set of papers, and then assault the townhome where they are being kept. This isn’t terrible. The usual Too Much Information background, but it does provide a nice summary table of the clues to be found, as well as some overlapping of the clues and some other street-life encounters to mix things up a bit. Some advice on running interviews is welcome also. Somewhere someone said “Hmmm, going to be a lot of interviews in this one, as the party asks around. You know … since the adventure relies on that then let’s give the DM some advice on it!” Regardless of its actual value, they tried. If you could yank out the Slave to Formatting state blocks, etc, then you’d have a decent little adventure. Maybe a little light on color and flavor. Of course, it IS full of state blocks and other Slave To The Standards formatting. It does rely on the party being nice people, for the hook, and saving a merchant under attack. That’s akin to “this is the adventure I have for you tonight, save the guy if you want to play D&D.”

This is a cute side-trek. Hill giants blackmail the party: work for us for we’ll flatten that nearby village. There’s a great line in this: “You look around, and maybe you think ‘these giants got good caves, plenty to eat, lots of people to steal from … a pretty good life.’” They want the party to make beds, pots, etc, so they can live the high life. They bully and harass the party, if they agree to craft for them, all with the threat of the village destruction hanging over their heads. I could only hope that the party would agree, then get disgusted, say “fuck this shit” and strike back. I think it’s set up in a way that is not forced and yet gets the party into a crafting situation where that can occur. The caves are not overly described (yeah!) but it could use a few more examples of bullying giants/flavor.

Textbook Dungeon Magazine adventure exploring an old tower. A very long intro. Mostly linear. Choices have no impact. REALLY long encounter descriptions that describe little of value to the DM. The hook has the party saving someone because it’s the good thing to do. A parkour chase across roofs either ends with the bad guy getting away or, if the party make a zillion skill check, him falling to his death. IE: No impact on the adventure. This is a capital offense in Brycelandia. Exploring some ruins the party encounters bugbears. You can’t talk to them/question them … they fear their leader! How many fucking times do we have to read this bullshit justification? What surprise is going to be spoiled? Do you really need this crap? Isn’t’ it much better to reward the smart party, and take advantage of scheming plots and everything else that a social element adds? No? You say you’re a hitty DM and you run D&D like it’s a mini’s combat game? Oh, ok, as long as we’re all clear that you’re a tool …. Anyway, dungeon under a ruined tower that is mostly linear and uninteresting. There are four or so factions, but not really, you can’t really talk to them or exploit them or play with them, they are really just four different main groups of creatures.