Sepulcher of the Mountain God 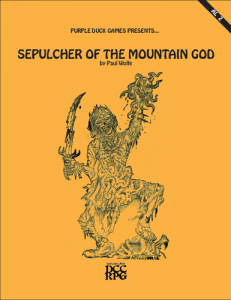 Braving the hidden tomb of an ancient tribal king, the adventurers become embroiled in a quest directly from Ira, the Mountain God – find the Skull of Vyache and his magic club, Alceon, that were stolen by Bashkim and the twisted minions of Gelihedres.

This is a 17-room mostly linear tomb/cave complex. It makes an effort, but ultimately provides lots of text to little effect and the linear nature of the adventure detracts. It turns into a slog, facing room after room, with little for the DM to get excited about.

I want to focus on the descriptions, which means the DM text and read-aloud. One of the themes I go back to time and again is the purpose of the text in an adventure. The purpose of the the text is to inspire the DM. This is, after all, a play aid. It’s meant to be a crutch for the GM to use in their game. The DM, or, rather, the DM’s imagination, is the single greatest ally the designer has in their attempt to provide value to the DM. To this end the designers text needs to be targeted to the DM, to inspire them, to plant a seed in head that can grow. The goal is, after the DM reads the entry, to have their mind racing. To have a fractal explosion of possibilities explode in their head. That’s the impact of a good description: the possibilities it generates excites and inspires.

If I was describing a room and wrote “The rooms is large” or even “the room is big” or “the room is huge” then a sort of very generic room idea seed is transferred from the writer to the DM. In this case the idea is rather abstract. I was very specific in my writing so the idea transferred is pretty boring. Is any of that appropriate for a Lovecraft adventure? Cyclopean, echoing, the top lost in shadows. In fact, I would suggest that both Cyclopean and Echoing are better than large, he top being lost in shadows is better than both. The best descriptions show, instead of telling. “Endless footfall echoes” shows. “The top lost in shadows” shows. “Large” tells. “Cyclopean” also tells, but it also conjures up more specific imagery than “large.” And what’s the key: specificity.

Let’s take a look at one of the descriptions in the adventure. This comes from room 1: “A larger, decorated corpse lies on a black stone bier at the back of the chamber.” Corpse isn’t the greatest choice, but my main beef here is “decorated.” It’s abstract. It’s a generalization. Decorated, but HOW? Garlands of fresh Luna blooms drape over the dessicated skin? I’m a suck ass writer but Garlands are better than “decorated.” What’s a luna blossom? Who cares (as far as the written text is concerned), the DM can make it up. The important part is planting the seed in the DM’s imagination.

There’s another very good (negative) example later on. The heads and shoulders of a foul giant are carved into a wall. Why is the giant foul? Is it leering? Misshapen? “Foul giant” is generic and abstract. The key is to be specific. Not overly so, not three sentences where a phrase or better word will do.

I’ve picked two examples out of the text but the general state is that genericism and lack of specificity. This is combined with overly long DM text. A decent college try is made with some item descriptions, but again they come off as long, full of things we don’t need to know, trivia. Similarly the hooks are quite nonspecific and little more than generic crap. Your god calls you, rumors of treasure, you’re related to someone who disappeared. That’s not really an effort at all. When all of this is combined with the rather linear map, there’s little to recommend here.

1 Response to Sepulcher of the Mountain God