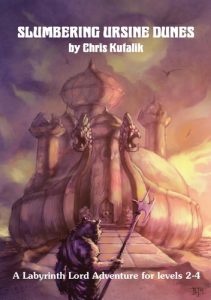 This is a pointcrawl with 25 locations and two dungeon-like areas. It’s set in giant sand dunes with paths running along the bottom and has several factions and a decent amount of weirdness. It would make a decent wilderness setting if you were looking for someplace to locate a dungeon. IE: I think it works best as a locale that the characters visit repeatedly, more so than a separate location that is the target of the adventure. It’s the age-old hex-crawl problem: why are they crawling?

Easy stuff first. A pointcrawl is just like a hexcrawl of dungeon, except abstracted. The map is laid out with nodes, the adventure locations, connected by lines. You can ignore the lines, and climb the dunes to go a different direction, but it’s mostly like an old text adventure game. Exits in the wilderness are E, NE, or S. The dunes are made quite challenging to climb, but the explicit advice is to allow it, if the party really wants to.

While the product is 68 pages, the actually pointcrawl locations don’t take up much room at all, maybe six pages if the art were removed. Only a couple of the entries have much size to them, with most being one or two short paragraphs. Centaur tollkeeps, hermit in a zardoz head, antidiluvian lake of super-intelligent and civilized beavers and so on. Mixed in with the “normal” encounters are the two dungeon encounters, a golden barge buried in the sand and the tower of a local demi-god, who is at home. Also mixed in are some encounters with the various factions. Pirates in the service of a local were-shark, the demi-god and his centaur and bear-men followers, an old adventurer and his kin, and then the evil elves. Oh, the evil elves. These guys have quite strong melnibonean influences and are the best “haughty evil assholes” I’ve seen since, perhaps, the GURPS Fantasy 2/Madlands “Soulless” jerkwads. Oh, I love jerkwads. The “nice” one has a chair and table made of old peasants. That’s sweet.

The monsters and treasures are great, exactly what I would expect. Want a healing potion? No generic shit in this, you’ll instead be drinking the pure white soul of someone who has drowned in a pond. You can get them from a “dude” who lives in the pond. He likes it when the pirates drown people in the pond. What else? How about some undead? Drowned corpses with long hair hair resembling willow leaves swaying and singing eerily in the night as they hang from trees. Ouchies!

The factions add a pretty good social element to the dunes and almost everyone is willing to talk under some circumstance or another. It never feels like the adventure is forcing you into something. The monsters are great. I don’t know enough Slavic mythology to know which witch is which, but they feel fresh and interesting and that they make sense in the environment. The treasures are great, with enough interesting bits that the party will want to keep some and be tempted by others and be horrified by others still.

If there’s a problem it is, as I alluded to above, the problem that all hexcrawls have: Why? And you know, I should back off of that. It’s not a problem, it’s more expectation setting. Much like the old MERP products, this thing describes a place and provides PLENTY of opportunities to get into trouble. (All Hail Discordia!) But it provides no over-arching plot. The points and factions have goals and things that will happen and there is definitely some elements of plot, but no overarching structure. You need to bring the adventure. There’s nothing wrong with that. In that respect it’s more like a hexcrawl that you use as the players travel between City A and the B, or a wilderness that you use when they travel between town and dungeon, or a city supplement. This is a resource for running an adventure, not an adventure in and of itself. It’s a wilderness-type thing you can drop in as the party: need an oracle, need a curse removed, are looking for a dungeon/object.