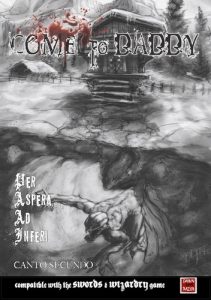 “The battle with the barrow-draugr had taken the most of our energy, and we barely escaped with our lives. The gnome was sorely injured in the leg and everyone was frozen to the bone. The horses and most of our supplies were still left in the draugr cave, where we had to abandon it to save our hides. Times looked bleak and despair had set in for real when Halross shouted: “-Hey, I see a farm over there” A farm out here in the outback? Strange, but in our current situation the prospect of a warm fire and some hot soup seemed like a gift from heaven. Slowly, we started our descent alone the snow filled slopes towards the cosy farm.”

Do you like Texas Chainsaw Massacre? Do you want to play it as an adventure? This is decent. Not great, but certainly better than average. It’s also REALLY not my style. I’m suspicious about my review because of that.

This is a small “survive the night” type adventure set in a rural cabin/farm. It’s decent for what it is, and could be used in any horror type game, including CoC or even planetside. 86 pages for something this short means a loose description style and a lot of support material. It could use a little shoring up in the treasure department.

You’ve seen this sort of thing before, in numerous movies. There’s a cabin in the Woods, the hills have eyes as well as having chainsaws made in Texas. Cannibal murder family meets travellers. Mayhem ensues. This is good and bad. If you’ve ever seen one of these movies then you immediately have the vibe the designer is going for. There’s a line here, too close and you are emulating instead of leveraging. Too far away and you can’t leverage the source material to inspire the DM. This preys on those same sort of memories that my love of folklore in adventures does, this kind of appeal to some deeper psychology found in the soul. Both the DM and the players get to leverage this as they play. The DM is inspired and the players are preloaded with whatever (in this case fear of being hunted and dreamlike powerlessness?) and all of that leveraged for the adventure.

The end result of all of this, in this case, is that the adventure can very nearly be run with just the maps and maybe a monster stat block reference. There’s even some nice maps on the designer’s site for you to print out. Read the adventure once, print out the maps, make a couple of notations, write up a monster ref sheet (which the designers really should have done, considering all of the other reference data provided) and maybe chuck the trap and wandering tables on to it. You could then just about the run the thing without the book after a single read through. That’s … good and bad.Good because, as I mentioned above, the DM grks the adventure immediately. Bad because … well … where the value?

Oh sure … tentacle monsters, horrible aberrations, mutilated prisoners … the little touches of horror here and there build the tension well. Finding any one of them pretty much tips off the party and they are scattered around pretty thick. (More on this later.) But … +3 short sword. Silver necklace. Silver brooch. +1 battle axe. Wand of fear. The treasure is boring and very little of it is themed to the setting/adventure. That’s a pretty major miss.

The entire adventure pretty much relies on one thing: the party staying in the cabin with the family and not catching on till dark. Almost any poking around at all will reveal some kind of horror that will set off the alarm bells in the parties head. I have NO idea how to introduce this thing and make it work. Maybe just a “Sure, you find a little farmhouse and the family is willing to put you up for the night,” ANYTHING else and the party will know something is up. Maybe it’s just me and my courageous group of Murderhobos, but a DM that says ANYTHING is called into question fast. “You have a nice dinner …” ‘NO! No I don’t! I don’t eat ANYTHING! Or drink ANYTHING! I triple lock the door, we all sleep in the same room and post a double guard! Also, I start working on the floorboards and ceiling in case we need a fast escape!’ The adventure encourages you to get the party to trust the hick family. Not. Gonna. Happen.

There’s this taking the bait thing that happens at one shots, con games and sometimes in home games. Everyone knows it a setup but you take the bait anyway because that’s the adventure and you’re here for a good time. That seems out of place here. The odds are weighed against the party and playing this in a Take The Bait fashion seems unfair, because of the lopsided nature. But without taking the bait then the DM must rely on under describing … which again feels a bit … unfair? I just don’t see how to use this.

Once it gets going there’s another problem: why do they stay? Why not just run away? The obvious answer is because half the party is drugged/captured, etc from the meal served … which is also the official version of events. I’m not sure about this. Splitting the party, or asking half the group (or more) to sit out the game is not a recipe for success in the fun department. The only way I can see working is to have the party (or the undrugged character(s)) find the prisoners pretty quickly after the inciting events. This provides a motivation, beyond the party proper, to stick around.

It’s good at what it does. Twisted family. A ghost that could be friendly. Tunnels under the land with hidden entrances. Twisted science experiment creatures. Things from another realm. Scarecrows. Creepy dolls. The dumb brute family member. The knife family member. Pa. Ma. Little girl. Everything you want in a Texas Chainsaw adventure is here. It should be fairly easy to run (if they hook in and stick around.) You could use this in CoC, modern, 1920’s, D&D/Fantasy, and probably even Sci-Fi. The text is long, but you need almost none of it at the table once you do a single quick read-through, especially is you annotate the maps.

7 Responses to Come To Daddy