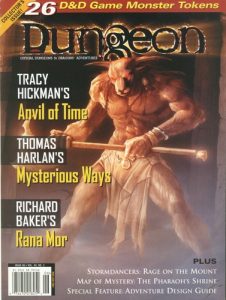 This Dragonlance adventure is a thirty or so room dungeon that is repeated three times, during three different ages. You get kidnapped in, muck about meeting famous people and collecting time travel gems/coordinates in the various ages, and then exit. I am … intrigued by the concept but loathe some of the choices made. The kidnapping/hook, in which the players are just teleported in, is just fucking lazy. “You’re in room 1 of the tomb of horrors and need to get to the end to get out. Go!” There’s also a good bit of “famous people in history” running about. Huma and a dragonlance and orb of dragonkind, Lord Soth, Fistandant … it seems like a weak excuse to name drop rather than something to advance the adventure. There is some lengthy read-aloud and in places even lengthier DM notes, usually describing some contraption in meticulous detail. There’s also some “The bowl is normal and the archway is not harmful” text, which is just bad editing, as is “the room is burned. There was a fire here in the past.”We don’t need to know about the past, even in the time travel adventure. The map could have been better, perhaps with some different colored notations, to note different creatures in different times. Some of the read-aloud and room descriptions make notes of sounds heard or have things in the room impacted by things the next room. These are nice touches that make the rooms seems more alive and help the DM run the adventure. I just can’t get over my distaste for the name dropping and teleport kidnapping hook.

Meh. This is supposed to be a ruined temple in a jungle. It feels like a normal dungeon. There’s a journey up river with several forced combats and a couple of encounters that are trying to decent: an old hermit and a faux war party. The temple proper is about forty rooms. It’s got some undead priests, some living cannibal priests, and a couple of animal types that have wandered in. The room descriptions can be quite lengthy, as can the read-aloud, making it difficult to find things during play. Further, they are not very interesting. It just doesn’t feel very much like a jungle temple. The language is stilted and … remote? Cannibals, priests, undead priests a ruined jungle temple, that should be great. Instead it feels like just another dungeon.

This is a short adventure through the woods, across a bridge, through a five room cave, up to the top of a mountain. All in a storm. The various encounters are not terrible, although there’s a bit of trap-weariness in the caves. A glass brigde, in a storm, with a couple of mephits harrying the party. A stone circle with air elementals dancing and then, of course, the monster/trap zoo in the wizard caves. The rooms descriptions are VERY lengthy, with every trap getting a long paragraph, explaining too much, and everything seemingly getting a description and background that is not needed. This could have been as a 1-pager or 1 sheet adventure. As a longer adventure it’s torturous to use.

A D&D adventure in the Holy Land during the crusades, for level 7 characters. Did I miss a source book? This seems more than a little idiosyncratic. The long monologue says that a part of the true cross has been stolen. Tracking the hospitaliers to Masada leads to saracen lands, and then to Petra to face the final enemy. Long read-alouds in monologues form at the start of the two halves of the adventure. A lot of DM text telling you the historical significance of an area and/or what happened there in the past. Really nothing more than a couple of fights, with little text to support the DM run an evocative/living environment. 🙁