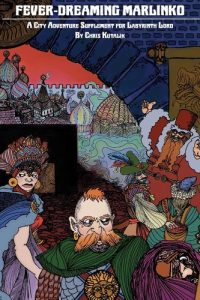 I suck at describing good things. This thing is Goooooood!

At its core this is a city supplement. It describes a city. It describes a city in which EVERY. SINGLE. THING. Is something that the party can interact/have and adventure with. It is PACKED FULL of adventure seeds. Of quick hit text that strikes in a sentence or two and then moves on. It is one of the clearest examples of excellent writing that is appropriate and directly useful to the GM.

There are these things we know generically as “adventures.” Some of them are traditional plot based things. Some of them are more neutral locations that can be used in your own campaign arcs. Some of them are event based. Some of them are investigations, or mysteries. Some of them are hex crawls. This thing is …. Hmmmm. It’s some combination of a hex crawl and one of those neutral “module” (the old definition of module) locations. Except it’s in a city. And it’s one of the best city supplements every produced, if not the best. If you’ve seen Towers of Kryshal, or the city section of ASE1 then you’re on the right track. But this isn’t Kryshal or ASE1, it’s something different. It’s a all about the city. More, it’s all about DOING things in the city. Not static. Not a shopkeep with lanterns. It’s dynamic. Things are going on. I could be wrong, but I think EVERYTHING in this place can be interacted with, or, rather, has something going on that that can directly impact the characters. It’s not abstracted. It’s not mundane. It’s not interactivity like “you can buy a lantern” or “she’s a fortune teller.” That’s not interactivity, at least not in the way I use the word in these reviews. I use Interactivity in a way that means driving the fun forward. This product is ALL that definition.

I talk about this a lot in dungeons and other place descriptions. Inevitably there’s some a room description that goes something like “10. This is a bedroom. It has a bed. There is a wardrobe. It has clothes in it. There are sheets, blankets and pillows on the bed. There is a lantern on a side table next to the bed.” That is a shitty fucking description. (It’s also the soul of tercity compared to some of the descriptions I’ve seen.) It describes a normal bedroom. I know what a bedroom looks like. You know what a bedroom looks like. More to the point, the bedroom and its contents are irrelevant to the adventure. It is doing nothing to advance the adventure, or for the party to interact with or get into trouble with, or anything like that. Understand, I’m not complaining that’s there is, essentially, an empty room. That kind of shit can sometimes have a purpose. I’m complaining that the adventure was taken up with a bunch of useless text for the DM to wade through. If you’re going to write something then write something that advances the adventure, or the fun, in some way. Similarly, in a town supplement, the entries are full of inn descriptions, or shops, or other stuff that is boringly described. The price of food. Price lists. Boring normal fantasy stuff that is nothing more than window dressing in a B-Movie.

Not. This. Everything in this contributes to the fun. Everything is a hook. Everything is interactive. No boring old descriptions here. The town government building gets a two line description. Here’s the second sentence: “While technically sitting in Golden Swine territory, the structure is open and available to the bribery and graft needs of all citizens.” That pretty much tells you everything to know, in one sentence, and is focused on HOW the party, and/or adventure, will interact with the council. The plaza, outside, has a one sentence description. Here’s the second half: “[the plaza is] filled with clusters of citizens, eccentrics and grifters (though that may be a redundant set of distinctions).” Again, this immediately gives you the feel for the place. You now know, instinctively, how to run the place and what color to add. You mind flies with the possibilities. And it’s clear HOW they will interact with the party and how, possibly, the party will interact with them. Time after time, Place after place. NPC after NPC, this sort of thing takes place. The hiring hall, how they treat scab hirelings, and how they could picket/protest. Complications! Fun! There are a couple of townhome/dungeons provided for two of the major NPC’s/sites, but most of this is directly targeted at the sort of quick hit things that parties get into trouble with, or are looking for, in town. Buying a house? It’s in there! Temples & unguents? Lots of places to go! … with lots of creepiness and/or hooks!

I love cities like this. They directly enhance play, providing a diversion from the dungeons and wilderness with none of the dullness usually associated with Boringtown of BoringLand.

A perfect home base for your party.

This is available at DriveThru,https://www.drivethrurpg.com/product/151165/FeverDreaming-Marlinko?affiliate_id=1892600