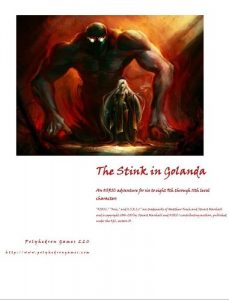 Golanda, the Kingdom of Hope, devoted to the good of its people and all people. It’s knights travel Ropa looking for service in just causes. Its priests roam the continent healing the sick and injured with no regard to race, faith or morality. But something smells in Eddiston and it’s the stink of corruption.

The entire thing is presented in a very conversational form. It’s as if you were sitting down, having a beer with someone, and they described their last game to you. It’s not quite incoherent, but it’s also not quite all there. It’s full of anecdotal events. That’s good! They ground the detail and provide something to hang your hat on. But it’s bad in the conversational form it’s presented in.

Out of nowhere there’s a table presented on what you see if you climb up to the city walls. It’s not bad: a demon scurrying across a street, a zombie bumping into a wall, a panicked dog, people cowering in a corner. This is decent content. Maybe a little generic, but it’s trying. There are plenty of example like this in the adventure (well, at least five anyway.) A daft old woman, zombies feeding on bodies, and so on. That’s the sort of decent, specific, content that many adventures don’t bother to describe. “12 zombies” or maybe “12 zombies attacking some villagers” is the usual fair. It could be even more specific, but what’s here IS decent … when it tries. This leads into the monsters actually DOING things. They argue. They feed, and so on. Again, somehow this sort of content has been lost in many modern adventures.

Make no mistake: this is terrible. It’s linear. It’s conversational. It is, at best, just a framework. Stat blocks take up fifty percent of a page. It’s not so much organized as it is a story narrative, told linearly. It reminds me of some of the poorer Adventurers League stuff, like The Seer, but organized in a far worse fashion. Devoid of much content. What there is is linear. There are brief bright sports with the encounter descriptions, but its hard for me to even call them encounter descriptions.

If you sat down, right now, and typed up, in Word, describing the last adventure you ran, in as if you were talking to your buddy, then you’d have this adventure.

5 Responses to The Stink of Golanda