Night of the Mad Kobold 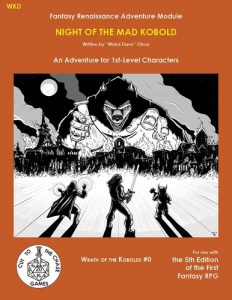 By Dave Olson
Cut to the Chase Games
5e
Level 1

The town of Cresthill enjoys a favorable location along the winding Graywand River. Trade is good, and the prominent gnomes of House Kelver run most of the businesses to the prosperity of the people. Now, however, a dangerous lunatic—a kobold from the nearby Talon Hills—has decided the gnomes of House Kelver need to be a taught a fiery lesson, and only a band of heroes can stop his plot.

There are about six different versions of this, each for a different system. I somehow managed to end up with the 5e version instead of the S&W version. This is a magic ren-faire adventure, in a gnome city with an alchemist kobold constructing bombs of flour and fire beetle. It’s mostly linear, with a brief free-range element in the middle, and a lot of contrivances to make up a plot. It’s also quite lengthy, and I’d say boring/uninspiring, for the amount of content.

Only about six of the twenty pages are the core content of the adventure. There’s quite a few pre-amble pages with instructions and backgrounds, and quite a few pages in the rear for NPC stats and personalities, maps, and so on. I’m not sure when this “lots of useless shit and not much adventure content” began, but I suspect it has something to do with the Pay Per Word scene. If I can provide the same content three different ways then I only have to be original once. For some definition of original that I may not agree with.

This verbosity-to-little-effect continues in the adventure proper. The key NPC’s get little offset boxes with their personalities and motivations noted. That’s great, in theory. It helps you find the content during the adventure. In practice, these sections are a couple of paragraphs long and drone on and on, using a maximal number of words to convey simple concepts. The guard captain is a family man, dedicated, and dislike his corrupt boss. The adventure takes two paragraphs to tell us those three things. The added words do nothing. In fact, they detract from the adventure because now the DM has to read the lengthy ass paragraphs when running the adventure instead of just scanning one sentence that says: family-man, dedicated, hates lazy corrupt boss. My language isn’t that good. It’s too fact based and doesn’t take advantage of the wealth the english dictionary provides. My language is also AT LEAST ten times better than the two paragraphs provided, because my language is usable to run the game.

There is a paragrapgh or so in the beginning that tells us all about kobolds. Their history in D&D, that these kobold sin this adventure are a different common brown type, and so on. It goes on and on, adding nothing useful to the adventure … until finally it says: And don’t forget, they ‘Yip!’” Once decent thing to help the DM bring the adventure to life. They Yip, in a paragraph of text. And I should say that that kind of direct game-enhancing content (such as, They Yip) is few and far between in this adventure. When there’s read it’s lengthy. The DM sections are lengthy. The NPC descriptions are lengthy. Seldom do they contain useful things and seldom still do they provide content like: They Yip.

There’s a … railroad? Or maybe it’s just very linear and full of contrivances to advance the plot. Hmmm. I think that means railroad. Anyway, the inciting event is an explosion. It’s assumed the characters help out, I guess out of the kindness of their hearts? If they ask around the milling crowd they get a description of someone seen entering several weeks ago. Giving this to the guard captain causes him to recognize the dude. You go find the dude in a bar, only to be attacked by some thug buddies. The dude conveniently falls unconscious so you can question him. You run around town, in the “free play” portion, finding the other bombs. It’s assumed that somewhere along the route you meet the mad kobold bomber and find out there’s a fifth bomb.

I think it’s fair to say that this is pretty typical adventure schlock.First you ask around, then run around, then finally fight the baddie. It’s boring, lame, and not very interesting, providing the barest of ties to try and connect things. You have to question the crowd. Twice. You have to then talk to the captain. You have to not kill the corrupt guard and not kill him. You have to accidentally run into the kobold while going from place to place in town. Why is the town gnomish? For no particular reason, and it doesn’t really feel like a gnome town at all. Why is the bad guy a kobold? For no particular reason. It’s this sense of the generic that comes from applying fantastic tags to the mundane that rubs me such the wrong way with these magical ren-faire settings.

There’s also this weird vibe around defusing the ‘bombs.’ The players are encouraged to be creative, by the text, and then it goes to great trouble to say what WON’T work. The bombs have a fire beetle in them. But if you kill the beetle then the reagent still goes off and the thing explode. This means that there ARE right answers. On the one hand limitations should be fine. On the other, making them arbitrary seems counterproductive to encouraging the party to think freely.

The amount of DM fiat to make the thing work right, the linearity, verbosity, and dullness of the general text make this a skip for me. The addition to gnomes and kobolds, for no particular reason, and the magical ren-faire alchemist stuff is just a turn off. I wish the adventure had not tried to explain things. It’s a magic bomb. It’s doesn’t need a flour/fire beetle explanation. Exploding skulls, yellow with flaming eyes that cackle manically as they get close to *BOOM* time? That I could accept without question.