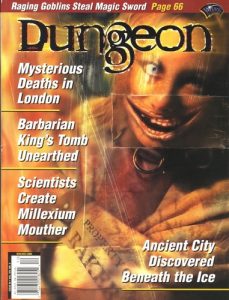 Joy. An asylum. I’ll put this in the pile of museum and archeology dig adventures I’ve collected. You’re hired to find some missing people who were to deliver supplies to an asylum. Turns out they never made it and weather forces you to stay overnight. Blah blah blah evil plot, enslaved people digging something out of the nearby mountain. It’s unclear why the party doesn’t just kill everyone they see and burn the place down right after “asylum” and “don’t know anything about it” and “please stay the night to keep out of the weather.” You know the deal. Super long read-alouds for mundane locations that add nothing, and longer DM text that is also mostly irrelevant to the adventure make this a pain to run. And since it’s a “mystery” then all of the mystery-breaking spells the characters have access to are gimped. Lazy. One of the “subtle clues” that the party is suppose to pick up on is that one of the beds have bed bugs … evidence that the good doctor has not been working alone for months. A) No one listened to the monologue. B) No one is going to pick up on that. C) They already stabbed the guy when he opened the door. Asylum & bad weather, remember? Nice weird art on page 26 by …. Marc Sasso? (Ha! Turns out he’s done Dio covers!) Otherwise this adventure has nothing interesting to offer.

Find & explore a barrow to cure a cursed unicorn. This thing is full of LONG monologues and overly-descriptive DM text. It could easy be 75% shorter and lose nothing. I’m fond of barrows and this has a barrow, which means I’m fond of it. The barrow is decently done, feels barrow-like and has several interesting encounters … including one that seems out of Grimtooth that could be telegraphed better. The clues to find the barrow are decent, if long. There’s a tribe of evil humanoids that will talk to you and you can buy info/stuff from. Inexplicably, they attack the starting village while you’re on the way back from the barrow. I get the nice visual and the scene the designer is going for, but it seems very out of place and random. The spear you recover from the barrow is the cursed unicorn’s horn. You need to touch them together to cure the unicorn. The spear is powerful. If they had stopped there it would have been ok. “Keeping the spear is an evil act.” Welllllll…… yes, it is. Calling it an evil act comes with DM-fiat baggage, and all of the implied punishment … even though the adventure doesn’t actually say anything else. TELLING the party the spear is super powerful, describing the powers, and THEN giving them a choice would be delicious indeed.

Indian diabolist attempts to summon a demon named Kali to earth. Maybe there are gypsies that steal children and penny pinching scots also? Scene based, and there are six. You can shove your scenes up your ass Andy Collins. Go play Vampire or wait eight more years for Fiasco.

Oh! Oh! I knew I recognized this issue! It’s got one of my favorite adventures in it! I love this one! At least, I REMEMBER it as being one of my favorites … sooo …. I’m probably reviewing this one through rose glasses.

A week ago the local DCC mob went all funnel up in the local goblin caves … and no one came out as first level … or came back at all. Full of old people, women, and children, the party is encouraged to take a shot … and lured by a magic sword the goblin leader has. This intro is pretty abstract in the adventure and could use just a bit more colour.

The caves are multi-level, with bridges, chasms, chimneys, multiple ledges, cramped corridors, short 5’ ceilings full of smoke from torches, and other cave features. And then suddenly some crazed goblins come screaming out the darkness! There’s some nonsense about how they are barbarians, but it’s TOTALLY that cave scene in 13th Warrior (and fuck you if you don’t like 13th warrior! It’s one of the two best D&D movies EVAR!) Primitive cannibal goblins, fetishes all over the place shoved in the cracks & crevices, war paint, howling goblins, tight and evocative setting. I fucking love this cave! And THEN the place changes. After killing the leader there’s an earthquake the caves change, with new challenges to overcome! There’s even some faction play thrown in, with the bitter shamen being discovered (maybe) early on, and he’s willing to sell out the chief, as well as an NPC ranger. The read-aloud, while not imaginative, is mercifully short. The DM text, while not terse by my standards, is not the usual completely over-prescriptive text usually found in Dungeon, except maybe in its description of the cave features, which goes on for two pages. The reaction section, to the parties intrusion, could also be beefed up a little. A gross shamen bowl full of blood that’s Bulls Strength? Sign me up! I WAS disappointed that the magic sword is only a +2 longsword. 🙁 LAME!

Post-industrial Greyhawk. IE: Shadowrun. Hired to retrieve a package from a bad part of town, the party finds something is wrong, the place being trashed and the street gang turned into zombies. They find a genetics lab in the basement. The DM text needs focus; important information is hidden after trivia. The various sections are nicely done though, with the “normal” house being a combination of horror and zombiepocalypse and the lab basement being a nice little sci-fi ruined genetics lab with a creature loose. Nice wandering monster table for the neighborhood also, with the encounters there offering some nice roleplay opportunities that FEEL like post-industrial/Shadowrun. Some of the initial read-aloud is quite overblown: “No one really wants to know what’s going on in Crossroads tonight, or any night ….” That’s some wannabe author shit right there. This is definitely highlighter bait though.