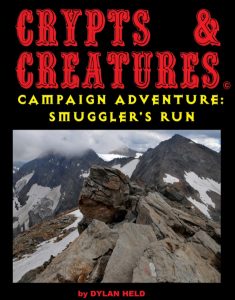 Welcome to Smugglers Run. An adventure designed for four to five players from levels one to two. Smuggler’s Run, once considered the primary pipeline for Corinthean contraband in the great City of Jor-Carmin, has been dormant for quite some time now. Officially claimed by Corinthea nearly 20 years ago when a toll was placed on the road; the farmhands and settlers along the old route have enjoyed peace and fair trade since, albeit heavily taxed. The humble villagers of Hamilton, who once would have to sneak their goods throughout the kingdom, now are simple farmers, traders, and craftsmen who are happy to play by the rules. Still, the dangers along Smuggler’s Run have not entirely vanished. The players in this adventure are hired to investigate a lost caravan. What seems a simple task that any farmhand could do turns into something much more intriguing. The path to becoming a hero starts somewhere. The mysteries of Smuggler’s Run may be more than just urban legends and are filled with more questions than answers, but will the players have the guile to investigate it’s shady past? If they make it through to the end, it will be up to them to decide.

This is a railroad of an adventure, but it’s also nicely done. The personality of the NPC’s involved really comes through and most of the situations seem quite a bit more relatable than most adventures. People act like people do. It also does a decent job of making it SEEM like actions have consequences, even though almost everything is pre programmed, right down to the last minute escape of the evil villain.

One of the many nice things about DCC is the funnel. Take a bunch of commoners and shove them through some danger. The outraged village mob is a trobe that very much appeals to me, as is their slaughter and their couple of standouts. This adventure uses that for a hook. Willy the hops farmer has a wagonload that has gone missing, right during the harvest and gets a group of fieldhands, etc to go look for it. Willy speaks in authentic western gibberish and both the first and a great example of the characterization given to the NPC’s. Almost every NPC has a personality that comes through in their (generally brief) read-alouds. They have strong personalities, from WIlly the yokel, to the highwaymen, to the bar room brawlers, to the barman to the barmaids. Not only do they have a memorable presence, but it’s done in a terse style AND their motivations are relatable. During the big finale battle one of the bar maids grabs anything valuable and tries to flee. Nice! The NPC’s are also all summarized on a single page at the end of the adventure, something I appreciate as a DM. There’s not an overwhelming amount, but it still keeps you from having to jot down notes.

The adventure also does a decent job with callbacks. Bandits met once are met again, and remember the party and react. As does WIlly. As does an NPC hireling. As do the bar maids. As does the bartender. NPC’s show up more than once and by doing so they give a sense of connectedness to the locations. Not just random places with random people but concrete locations with real people in them. This is all VERY nice

On the downside, this is a completely linear adventure. Go do X, then Y, then Z. The text single column, in a large font, and is full of “if the party does A then B” kinds of very specific DM advice. This all leads to a wall of text kind of thing when encounters run into each other. More than any other adventure I’ve seen recently, this one has problems. It’s like line breaks and section breaks have not been invented. It’s more than wall of text, it’s combined with this lack of … clearly delineated sections? That makes this a hard one to find things in and follow. It IS pretty simple, all in all, but still …

It also engages in two activities twice that I take exception to. The first is the wagon driver the party rescue. Regardless of the parties healing magic, potions they carry, or anything else they do, he collapses. I believe the text goes something like “regardless of if they are successful or not …” I get it. You want the party to rescue the dude. But there’s no reason. The dud being alive or dead does nothing to add to the adventure. But by FORCING the dude to be not responsive to the party you take away the player’s agency. Why heal someone, ever, if DM fiat is always at issue? The guy just should have been dead. Period. (If he talks to the party then might find out a wolf attacked him, which is evidently hidden information. I’m not sure why, since knowing its a wolf doesn’t really do anything one way or another.)

Secondly, the barkeep double crosses the party AND he’s given a plot shield escape. Bad form old chap. He’s the local bad guy representative, hance the doublecross, but, still, making the adventure/arc less transparently good vs. evil and more “Choose Your Own Adventure” would have been nicer to see. And giving the dude a plot shield, that he only uses when at 0 or less than 0, is SUPER lame. Fuck you. You’re the designer. Find a way to make your villain “cool” without taking complete control away from the players. That’s your job. Or, and here’s some free advice: Don’t. Let’em fucking kill the dude. You know, like they EARNED.