The Sunday Stellar – DDAL4-04 – The Marionette 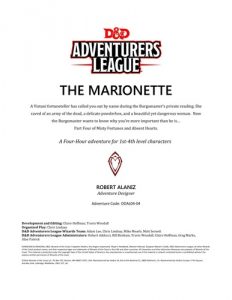 A Vistani fortuneteller has called you out by name during the Burgomaster’s private reading. She raved of an army of the dead, a delicate powderbox, and a beautiful yet dangerous woman. Now the Burgomaster wants to know why you’re more important than he is…

This four-hour adventure is in four parts. The party starts by being asked/hired to look into a missing wagon, bringing an injured person back to town. This is followed by a well done seance in part two, and then a zombie/undead attack on the town in part three. Part four is a dungeon/exploring an old manor home with some undead inside. I’m going to complain a lot upfront, but this is an ok adventure.

The first part of the adventure is mostly disconnected from the rest, providing only the introduction of a couple of NPC’s, one of which provides motivation for rescue in part four and one of which is the villain in part four. Hmmm, I may have been too harsh; the introduction of the characters prior to meeting them again IS good design, but the particular implementation in this adventure is not very strong. The “rescue” is really nonexistent and then the NPC’s are in the hospice. A little more advice/forewarning for the DM, in order to orient the NPC’s the proper way, would have been a nice addition. There’s also a bit of confusion with monsters. Harpies are mentioned in the adventure overview, and again in the appendix, but I don’t believe they are actually introduced anywhere in the encounter. The loss of a token combat hurts nothing though.

The seance sequence in part two is quite well done. The read-aloud is actually god, the mood setting for the DM is good, and the encounters, again, provide forewarning of what’s to be experienced later in the part four dungeon/manor. The part three undead attack is laid out more like a zombie movie than a typical D&D monster fight, which is a very good thing. Zombies ripping out throats of villagers and so on. The manor home is more of a slow burn, with a decent number of lead-you-by-the-nose hints, a few monster attacks, and then the big bad. There’s a decent number of tricks and traps in the home, with at least a token nod to tipping the players off beforehand. For example, the entrance hall has a glass roof that the read-aloud notes is leaking badly. Smart players will ask more questions, which may save them from the water-rotten collapsing floor. This happens FAR less often in adventures then I would like to see and I’m happy to see the designer here taking advantage of it.

There’s a plot shield here, and piece of shit plot shields (Ooops, redundant!) always piss me off. IE: “If the party killed Bob in the last adventure then the Dark powers have saw fit to restore him for their own unfathomable reasons.” No, I know the reason. It’s because of crap ass design, that’s why. Either you don’t put the dude in harms way or you don’t bring him back to life/make him critical for the further adventure.How about a big, fat, FUCK YOU. Why the hell even play the game if the player’s actions have no impact? So they can experience “The Story”? Fuck you and fuck your story. Write something that doesn’t take the god damn player agency away from them. The preceding diatribe has been a service of Fuck You Crappy Design Monitoring service.

While I’m on the subject of “bad design”, let me point out a few more issues before I get to the better parts. The rumors here are lame fact based boringness. Compare “Shadows have been seen near the graveyard” with FAR FAR better statements made by a little ghost girl later in the adventure: “She doesn’t know about her affliction, but says ‘it must be very bad because it makes Mommy very sad and Daddy very angry.’” That’s fucking great. The little ghost girls gets some wonderfully evocative lines to supplement the facts relayed. The rumors should have been done in the same manner.

The choices made are lazy in some places. In the first part you’re sent to go find Vasilly “and his friend.” “And his friend” is mentioned several times. When you find the body its “his friends body.” The poor SOB never gets a name. This is generic, abstracted detail and D&D adventures are seldom good when they rely on that sort of abstracted detail. Specificity. That’s the key to being evocative. Hmmm, lame/weak “you’re in a bar” hook. Not lame because its in a bar but lame because it’s boring and uninteresting done.

Some of the NPC’s get a nice little “roleplaying Bob” tip section. These are a little long for my tastes but their inclusion IS helpful. In particular, the last line, a quote from the NPC, conveys more information than the rest of the tip combined. Recall tha the little girl quotes were quite well done as well, and there is a great scene with a town crier that, again, uses direct quotes and it nicely done. “Oyez, Oyez, Oyez! The following is a decree from the most
distinguished and generous Burgomaster Randovich, to which we are all indebted…in one form or another.” and then also “Let it also be known that… Oleg, it is your turn to light the village lamps tonight.” A single, disembodied groan rises from the back of the crowd, oozing with disappointment. “That is all!” That’s good shit. It’s specific. It’s Olegs turn. He’s unhappy. That’s what players will remember and that the sort of thing that helps the DM out. Not a railroad. Not detailing everything, but instead providing a hard, impactful flavor burst.

I’m going to skip more commentary on part 2, a very excellent seance, and part four, the pretty decent manor crawl, and instead make some comments about part three, an undead attack on the town.

The idea is that straight out of the (non-combat) seance you are confronted by an undead attack on the town. You see four things going on at the same time and need to decide what you will do. Folks will recall that Deep Carbon did this is GREAT impact, and those leading sections were one of the reason is got labeled Grim/Dark: If you did option A then the people in Option B died, usually in front of you and in a very sad way. This being 5e it’s not QUITE as bad, and a splitting up party is assumed/advice is given.

This kind of thing works best when the players know the choices they are making. They have to KNOW that by letting Bob die they will instead save Carl who can do Y for them. This section is strongest when it illustrates those choices. The mayor yells “The food stocks are in there! We’ll die this winter!” when you see the burning building. The players know the consequences; it’s not just a burning building with crates in them. One undead seemingly directs the attack. It’s pretty obvious that if you kill him then you can cut off the head, so to speak. These are good choices presented to the players.

Two other choices are less well done. Zombies have some people cornered in an ally, in one, and in the other a man in a burning jail cell says he’ll reward the players. In both cases the reward is less obvious and more abstract “doing good.” Both have real rewards, one of the future zombie victims knows some of the map layout in the part 4 dungeon. The prisoner does have a nice reward. Instead, having the prisoner SHOW his potion and the set of magic keys he has, that would instead provide a concrete choice for the players. Likewise, putting the map-NPC in servant’s livery, or somehow communicating the reward he has, makes the choice more meaningful for the players.

Another comment here, specifically about the zombie scene/choice. The read-aloud telegraphs the “correct solution” and that’s never good. The second sentence reads “You may be able to distract and lure the monsters near a stack of heavy timbers that can be released upon them, pinning and restraining them, but you will have to offer a convincing distraction.” Instead, a map of the scene, showing a stack of precarious timbers, a pulley hook to swing on, or some other things, typical to a village, would have allowed some DCC-style creative solutions. There’s nothing wrong with providing the logs, but providing a map showing an interesting environment, with lots of stuff WITHOUT THINKING HOW THEY WILL BE USED allows for the creative and interesting solutions that good D&D thrives upon. I love seeing the party come up with a stupid plan. The read-aloud telegraphs the solution. It’s too bad that Organized Play is in such a state that this needs to be done. EVERY encounter is an opportunity to not roll to hit but instead creatively solve the problem.

Shit, I lied. I will comment on the manor. The little ghost girl is friendly, but is directed to provide some scares. A general suggestion, with her dead pet goose, is given at the start, but I think many of the rooms would have been stronger with a suggestion of what she may do here. The ghost goose on the dining room table, and so on. Finally, this section has A LOT of callbacks to the seance earlier. This sort of “first you get a hint then you get to use the hint if youwere fucking paying attention” is something I wish more adventures would do. The seance is excellent, in part two, and part four is made much stronger through the use of callbacks. And some of those callbacks are VERY creepy. Puppet people are not uncommon in adventures, but the marionette’d village rin this one is very well done indeed.

This is a pretty decent adventure, and stellar by Adventurer’s League standards. With a little work, a strong edit and clean up, a little more focus, this could really be a top tier adventure.

This entry was posted in Adventurers League, Level 1, Reviews, The Best. Bookmark the permalink.

1 Response to The Sunday Stellar – DDAL4-04 – The Marionette