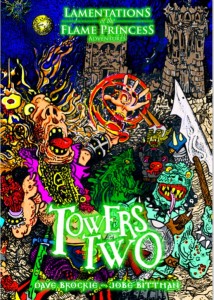 Dave Brockie (GWAR, Whargoul) and Jobe Bittman (The Monster Alphabet, The One Who Watches from Below) bring you a sordid adventure in a countryside ravaged by unending war! Featuring the Eloi! The Suck-Thing! The Loi-Goi! Spooks! Osuka the Talkative! The Sea Slut! Pig-Men! Truly unmentionable magic! The two brothers in their Towers Two!

This is a delightful romp of an adventure that gets most things right. Right enough for me to recommend it. It’s flavorful, sandboxy, and has more than enough things going on to keep the interest of the players up. it’s specific where it needs to be, offering up little scenes and motivations of the monsters/NPCs in order to spur DM/player interaction … exactly what an adventure should do. Easily the best adventure so far in the LotFP Grand Campaign. This being Brockie, there’s a decent amount of weird sex stuff in places. Those parts are written, I believe, as tastefully as is possible to do so, leaving the prurient mostly to the DM. as such it’s pretty easy to ignore or abstract if you’re a nice midwestern prudish american.

The adventure is a pretty good example of a sandbox. There are these two towers, each inhabited by half of a twin brother. There’s a town with two groups living in it. There are three or four sets of monsters independant of everyone else. There are a couple of sets of creatures related to the towers. Everything is presented in a very non-railroad perspective. There’s no assumed path for the players to take. Go here, talk to them or go there and do something else. This is refreshing. It’s just people, with relationship to other people, and the party showing up in the middle of things. There’s a huge number of groups to interact with, each with something going on. That’s great. I love it when an adventure has EVERYTHING going on, never a dull moment.

Those points are so important to a sandbox adventure. Because of the neutral tone and the sense that that the party is just showing up in an existing situation, the thing feels real. This is amplified by the various factions/ground and their relationships to each other. The old woman at the bar is treated like shit by the owner but the regulars are beginning to sympathize with her. The stable boy is caught somewhere else, giving the party the chance to get some information. The tower folk are out and about in the countryside, not just locked up inside. It feels like a real place.

This is combined with the use of “actions” to great effect. When they are out and about, or you encounter them somewhere, they are almost always DOING something. The stable boy is caught trying to “make sex” or the imp is trying to plant an object, or someone is trying to perform a kidnapping, or having a conversation about X. Again, I think this is one of the key elements to a good adventure. You can think of each of these as the inciting action for the encounter. It constrains the scene just a little in order to orient the DM’s imagination and allowing the DM ot then fill in the rest. “Thugs” is different than “Thugs attacking a villager” which is different than “thugs kicking the shit of a muddy boy in the gutter.” Thugs has no action inherent in it, leaving the world of possibilities open. That’s not necessarily a good thing. Thugs attacking a villager does contain the action element I’m looking for, but lacks color or mood. kicking the shit out of a boy in the gutter … that’s different. Why? Who’s the boy? Did he deserve it? What’s the bystanders doing, or even .. .are there bystanders? The mood has been set and now the DM’s imagination can go to the races.

That should be enough; those three things distinguish it from most adventures and in combination there are only a few that hit all of them. There’s more goodness: the monsters descriptions are evocative. There’s nice tables of villagers and random weird “deathsex” magic curses. The wandering monster table has a little vignette, less than a paragraph in Brockies original, for each. Just enough to bring them to life. The background is concise … for a modern adventure, and not too overblown. The maps (brockies own, I believe) are pretty decent as maps go. I especially like the village/wilderness maps done in a topo styling, kind of Harn-like. It’s also nice that the adventure relies, for some decent amount, on the Evil of Men. Sure, there are monsters, but the humans (the evil ones anyway) come off as real shits. it’s more … relatable, I guess? More visceral, to be sure, when the evil is from a human rather than a pig-man.

Everyone gird your loins for this next bit: a product for LotFP, by the GWAR frontman, has material which pushes buttons and causes some discomfort! I know, weird, right? There’s a rain of piss and shit when the big bad is defeated. You have to emasculate him to drain his power. and there’s the magic items: the deathfuck magic items. The magic items let you take some corruption and gets to use some powers. All pretty straightforward and nothing weird. But the main items are a weird sword-like thing in the shape of a phallus and whip made from a succubus cunt: the cunt whip. There’s also a monster or two with some ambiguously “lots of phallus-like implements.” Like I said earlier: details are not explicit beyond pretty much what I’ve described. This isn’t hard-core jr high fantasy stuff with explicit details. “It’s a cunt whip” and the adventure moves on. It’s about as tastefully done as it can be while still being included in the adventure.

On to the negatives! It’s a little wordy in places. I would call it unfocused, the way many Dungeon Magazine adventures are/were, but rather exuberant in its text. it adds a sentences or two or three when one of two could do well. I think this more … conversational? style detracts from the encounters during play because it makes the text harder to discern while running. There’s no hooks in the adventure. There are certainly a number of dangling elements that, once read through, you could use as hooks, but a hook summary at the beginning would have been nice. I think this is exacerbated by the book’s layout and the way the art is used. I like the art, but I think sometimes it gets in the way of organizing the text well for use at the table.

The factions/NPCs should have been summarized in a table, noting a few key relevant facts. As is, each DM is going to have to take some notes and make their own reference sheet doing the same thing. if we all have to do it then why not include it? Product designed to be used at the table rather than product designed … for some other purpose?

I didn’t do a strong comparison of the Brockie manuscript to the Jobe finished text, but at a glance it looks pretty similar. in some ways the Brockie text seems terser, but that may be the layout effect. Jobe did as good of a job as I think one can keeping up with the spirit of the Brockie text and trying to honor what Brockie did before he passed away. He’s to be complimented for that. In retrospect, his DCC work kind of leaned towards Brockie’s aesthetic. It’s hard to imagine a different writer fitting in so well.

The adventure is a little … opulent? in the use of text. The layout and support tables/materials should be better. Otherwise, this is a VERY good adventure and a worthy addition to your table. That fact that the GWAR front-man did it is just the icing on the otherwise scrumptious cake.