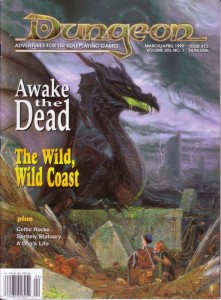 Mere of Dead Men gets a cover/feature image! Too bad this installment is one of the worst adventures in Dungeon history.

A mage hires you to find some minerals he needs. This has a long, boring backstory/beginning, a decent middle, and an unsatisfying end. The middle part is the description of, and several small locales, in a little … fiefdom? Manorial land? Anyway, a small little area of the countryside with a couple of manors and villages and other features to explore. It all feels very real and yet still has those elements of the fantastic. a rock wakes up and talks to you. Yeah! There’s an old noble lady who has died … and doesn’t know it. More than the usual hack-fest, you get to interact with her, perhaps for quite some time. The end has the party negotiating with a high-level monster who is sullen and trapped. It feels … unsatisfying, but I’m not sure why. The adventure does a decent job in providing those little bits of detail that I like in order to anchor an adventure to, but could still be more specific with them AND trim the backstory/exposition/unrelated nonsense. It should be about a third the size it is. Id say it’s a quiet adventure with a decent amount of interesting roleplaying offerred.

A Mere of Dead Men adventure … supposedly. In reality one of the worse written adventures in Dungeon history. This starts with four to five of backstory, some of the driest history I’ve ever read.The entire thing has reams of text. Reams and reams and reams. An dragon with a ring of invisibility gets the players to go dig up some bones. A couple of wilderness encounters. Some long text at a tower and in a crypt. Seriously, it’s like every every single thing is expanded to three paragraphs when one sentence would do. The destruction of your allies fortress happens off screen before the adventure starts. THAT’S why players hate D&D. This fucking with their lives for no reason at all. “Ohhh, I need to motivate the players.” Try motivating them with something interesting then instead of restoring to the old “someone you care about is kidnapped” trope. A dragon wearing a ring of invisibility? Let me guess, he flies because of a ring of flying? It’s a fucking dragon. Make him turn the fuck fuck invisible if you want him to be invisible. P.O.S.

LAME. Side-trek. It’s shit like this that ruined D&D. You save a puppy bulldog from some werewolves. It drains your life at night with a vampiric ability. Wow, the thing you save turns out to be EVIL? Oh my, never saw that coming. D&D parties are paranoid and unhelpful for a reason: bad fucking DM’s.

3 evil shapeshifters have taken over a temple in a village in a remote area. The party is sent to investigate why an invading army leaves the village alone. A pretext is displayed. (Very nice: a spinning top spun by an acolyte. I like!) There’s a small wilderness map for the surrounding area with some … interesting by generic? encounters. Most of the text is taken up with the description of the temple and the catacombs under the temple, both described in a dungeon-like/exploratory manner. It’s all disconnected. The priests are supposed to, I guess, give themselves away and make it obvious they are the bad guys? Or the party is supposed to sneak around the temple getting into things? The connection between the priests, their turning out to be evil, and then the exploration of the catacombs and the temple is not very strong. You’d have to do some linking yourself. Given that the imagery and plot isn’t very strong, it’s hard to see this as useful.

Side-trek length. You buy some art form a gnome. Turns out it’s a transformed sprite. You’re attacked by 36 sprites firing sleep arrows and then forced to go stop the gnome from transforming faeries. They can’t go after him because of the 20 shrikes he keeps as pets/friends. This is an adventure?